In recent years, carbon black (CB), carbon nanotubes (CNTs), and graphene (GE) used as conductive fillers have attracted the attention of many researchers [1,2,3]. Due to the high Young’s modulus, excellent thermal property, superior conductivity, high surface area, high strength, and fast mobility of charge carries [4,5,6,7,8], the GE is regarded as the ideal reinforcing material for the composites. Moreover, GE/polymer composites exhibit superior performances in many aspects [9,10,11,12], and have been applied in sensors, super-capacitors, magnetic shielding, and memory devices [13]. The GE has an important influence on the properties of the composites according to previous reports. Guo and co-workers found that the Young’s modulus and shear modulus of composites increased linearly with the increase of GE content [14]. Chen and co-workers reported that the functionalized GE significantly improved the mechanical, thermal, and tribological properties of as-prepared composites [15]. In addition, Alam and co-workers greatly enhanced the mechanical properties of composites by adding 1 vol % of GE [16]. Moreover, Govorov and co-workers have reported that the conductivity of the GE/EP composites was correlated to their tensile stress after the loading of GE [17].
It is important to develop the preparation method of the GE and GE/polymer composites for exploring their applications. There are several methods that can be employed to synthesize GE, including the reduction of graphene oxide (GO) [18], mechanical exfoliation of graphite [19], chemical vapor deposition [20], and epitaxial growth [21]. The reduction method is the most convenient compared to the others. To prepare GE/polymer composites, melt-blending [22], solution blending [23], and in-situ polymerization [24] are mostly employed. The dispersity of GE in the polymer matrix has an important influence on the properties of the composites, which could be improved by modifying the GE with compatible chemical groups for the polymer matrix. Moreover, the surface modification of GE can also improve the dispersity of GE in solvents [25,26]. Therefore, the covalent and non-covalent methods have been developed to modify GE. The non-covalent method can greatly preserve the original structure of GE, but the interactions between the GE surface and the modifiers are weak. Therefore, the covalent method is much more desirable in some application fields [19]. In addition, it is interesting that the GE can be used as the conductive filler and epoxy resin as the binder for the conductive ink. Lee and co-workers reported that conductive ink containing the dispersed GE nanosheets showed a high stability [27]. Wei and co-workers reported that the modified GE of various functional groups could improve the surface tension and adhesion of GE ink [26]. Shulga and co-workers prepared an aqueous suspension of the composite using GO and humic acid, which was used as the ink to print the films with various thicknesses [28]. Nemala and co-workers prepared a lower-cost conductive ink with few-layers GE, as a substitute for a Pt-based counter electrode, decreasing the cost significantly [29]. These studies inspire the GE/EP composites to be further explored in conductive inks.
In this paper, we demonstrate an effective strategy to prepare surface modified GE, which can be used as an excellent filler for conductive ink. The GO was first modified by grafting with a silane coupling agent (KH-560) via the covalent method and then reduced into the GE form. The modified GE can be dispersed homogeneously in organic solvents. Subsequently, the modified GE/EP composites were prepared using a double injection method similar to the previous report [30]. Thus, the dispersity of GE in epoxy resin can be improved significantly by associating the above two methods, and the GE content for preparing GE/EP composites with excellent properties can be reduced. The morphologies, structure, conductivity, thermal, and mechanical properties of as-prepared composites were investigated by different characterization methods. Interestingly, when 0.07 wt % modified GE was added, the tensile and bending strength of the modified GE/EP composite reached 74.65 and 106.21 MPa, respectively. When 0.1 wt % modified GE was added, the resistivity of the modified GE/EP composite decreased to 52 Ω·cm.

Graphene oxide (GO) derived from natural graphite was prepared by using the modified Hummers’ method according to previous reports [31,32]. The preparation of modified GO can be briefly described as follows. The GO (100 mg) powder was dispersed in 100 mL of ethanol by an ultrasonic dispersion with stirring for 3 h to form the dispersion. A mixture of KH-560 (20 mg) in 10 mL deionized water and 36 wt % acetic acid in 7 mL water was added to the GO dispersion for 30 min ultrasonic treatment. Then, the mixture was heat-treated with reflux condensing at 80 °C for 4 h. The products were collected by centrifuging at 10,000 rpm and further washed wish deionized water three times. Finally, the modified GO was dried in a vacuum oven at 80 °C for 24 h.

The modified GO (50 mg) was dispersed in 100 mL of deionized water by an ultrasonic dispersion with stirring for 2 h. Then, 50 mL of pre-prepared 85% hydrazine hydrate was added to the modified GO dispersion. The mixture was heat-treated with reflux condensing at 95 °C for 24 h. Then, the products were separated by centrifuging at 10,000 rpm and washed with ethanol three times. Finally, the modified GE was obtained after drying in a vacuum oven at 80 °C for 24 h.

Fourier transform infrared spectra (FTIR) of the samples were performed on a NICOLET-10 infrared spectrometer (Thermo Fisher Scientific, Waltham, MA, USA) using KBr as the sample matrix in the range of 1000–3500 cm−1. The morphologies of the samples were investigated by a scanning electron microscope (SEM Hitachi SU8010, Tokyo, Japan). Raman spectra were obtained on a Raman spectrometer (Horiba JOBIN YVON HR800, Kyoto, Japan) and a 633 nm argon-ion laser was used for the excitation under ambient conditions. The conductivity of the composites was measured on a four-probe instrument (ST-2258C, Suzhou Jingge Electronic Co., Ltd., Suzhou, China), and the tested samples were cut into dimensions of 20 mm × 10 mm × 3 mm. The resistivity was calculated according to Equation (1): where L is the distance between the electrodes, A is the cross section area, and R is the measured resistance. The thermal stability of the samples was studied by thermogravimetric analysis (TGA) on a thermogravimetric apparatus (NETZSCH TG209, Selb, Germany) in an N2 atmosphere at the heating rate of 10 °C·min−1. The tensile and bending strength of the modified GE/EP, CB/EP, and Ag/EP composites were tested on a universal testing machine (SHIMADZU AGS-J, Kyoto, Japan) according to the standard test methods (ASTM D 638-08 Type I [33] and ASTM D 790-03 [34]). For the tensile strength test, the composite samples were cut into a dumbbell-like shape and the dimension was determined according to type I. In addition, the dimension of the composite samples was 127 mm × 12.7 mm × 3.2 mm for the bending strength test, the crosshead speed was 2 mm·min−1, and the loading was 5 kN. During the mechanical tests and the conductivity measurements, five samples for each composite were tested to get the average value. Error bars often represent one standard deviation of uncertainty. Since the average values were presented in the graph, the standard error is the appropriate measurement to calculate the error bars. The standard deviation and the standard error were calculated according to the Equations (2) and (3), respectively: where σ is the standard deviation, n is the number of samples (five in this paper), xi presents the measured sample values, μ presents the average values, and σs presents the standard error. 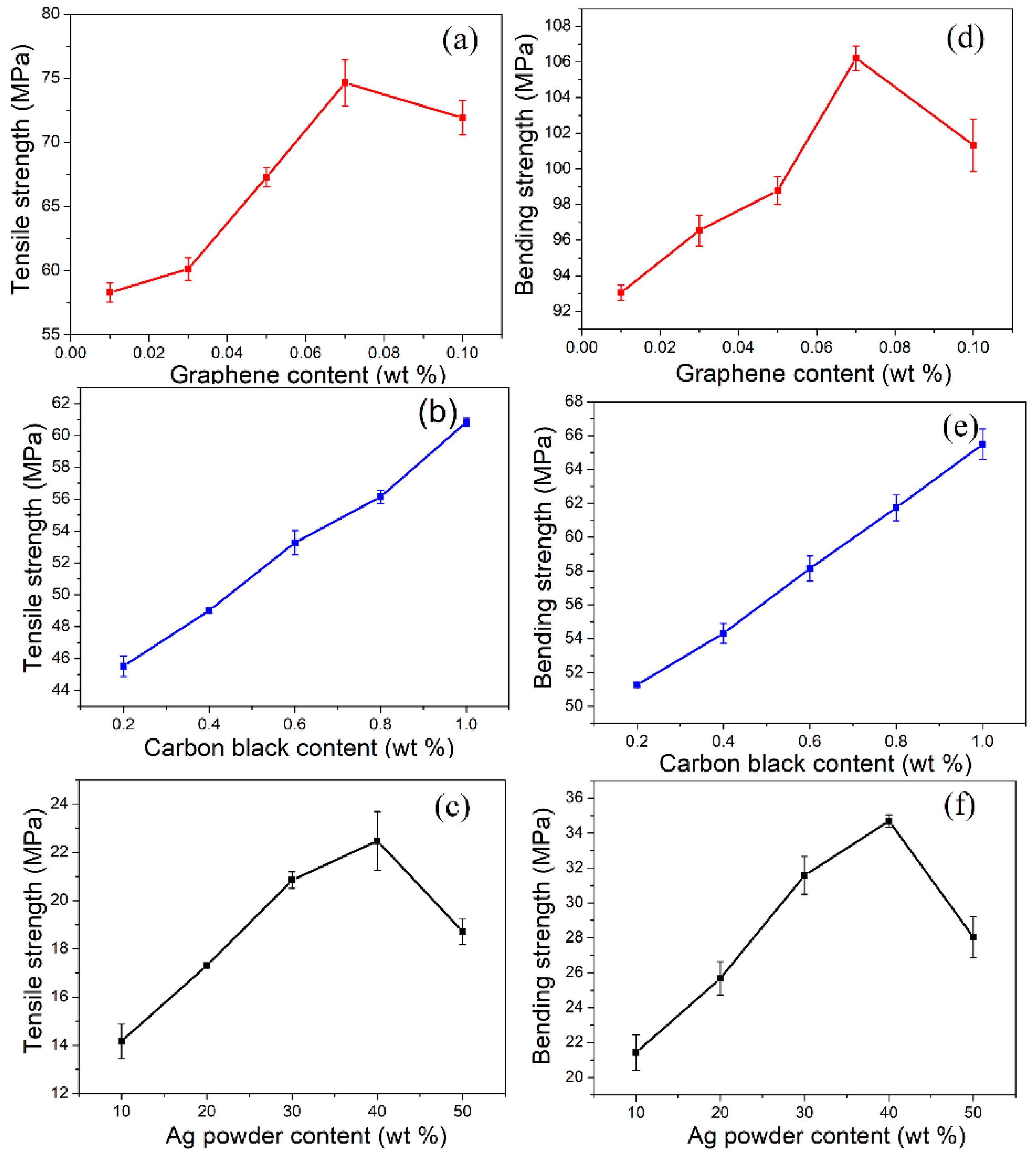