This study describes preparation and characterization of fluorine-containing organic-inorganic hybrid coatings. The organic part consists of bisphenol-A glycerolate (1 glycerol/phenol) diacrylate resin and 1,6-hexanediol diacrylate reactive diluent. The inorganically rich part comprises trimethoxysilane-terminated urethane, 1H,1H,2H,2H-perfluorooctyltriethoxysilane, 3-(trimethoxysilyl) propyl methacrylate and sol–gel precursors that are products of hydrolysis and condensation reactions. Bisphenol-A glycerolate (1 glycerol/phenol) diacrylate resin was added to the inorganic part in predetermined amounts. The resultant mixture was utilized in the preparation of free films as well as coatings on aluminum substrates. Thermal and mechanical tests such as DSC, thermo-gravimetric analysis (TGA), and tensile and shore D hardness tests were performed on free films. Water contact angle, gloss, Taber abrasion test, cross-cut and tubular impact tests were conducted on the coated samples. SEM examination and EDS analysis was performed on the fractured surfaces of free films. The hybrid coatings on the aluminum sheets gave rise to properties such as moderately glossed surface; low wear rate and hydrophobicity. Tensile strength of free films increased with up to 10% inorganic content in the hybrid structure and this increase was approximately three times that of the control sample. As expected; the % strain value decreased by 17.3 with the increase in inorganic content and elastic modulus values increased by a factor of approximately 6. Resistance to ketone-based solvents was proven and an increase in hardness was observed as the ratio of the inorganic part increased. Samples which contain 10% sol–gel content were observed to provide optimal properties. View Full-Text
Keywords: fluoropolymer coating; organic-inorganic hybrid; UV curable fluoropolymer coating; organic-inorganic hybrid; UV curable
►▼ Show Figures 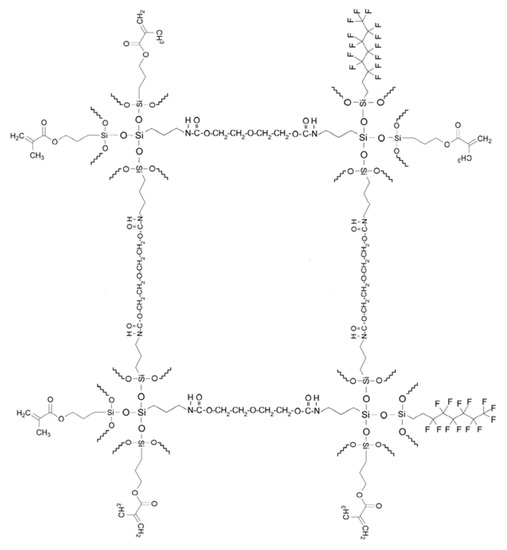