Establishing Genotype-to-Phenotype Relationships in Bacteria Causing Hospital-Acquired Pneumonia: A Prelude to the Application of Clinical Metagenomics

Antimicrobial Activity of Bee Venom and Melittin against Borrelia burgdorferi

Lyme disease is a tick-borne, multi-systemic disease, caused by the bacterium Borrelia burgdorferi. Though antibiotics are used as a primary treatment, relapse often occurs after the discontinuation of antimicrobial agents. The reason for relapse remains unknown, however previous studies suggest the possible presence of antibiotic resistant Borrelia round bodies, persisters and attached biofilm forms. Thus, there is an urgent need to find antimicrobial agents suitable to eliminate all known forms of B. burgdorferi. In this study, natural antimicrobial agents such as Apis mellifera venom and a known component, melittin, were tested using SYBR Green I/PI, direct cell counting, biofilm assays combined with LIVE/DEAD and atomic force microscopy methods. The obtained results were compared to standalone and combinations of antibiotics such as Doxycycline, Cefoperazone, Daptomycin, which were recently found to be effective against Borrelia persisters. Our findings showed that both bee venom and melittin had significant effects on all the tested forms of B. burgdorferi. In contrast, the control antibiotics when used individually or even in combinations had limited effects on the attached biofilm form. These findings strongly suggest that whole bee venom or melittin could be effective antimicrobial agents for B. burgdorferi; however, further research is necessary to evaluate their effectiveness in vivo, as well as their safe and effective delivery method for their therapeutic use. View Full-Text
Keywords: Lyme disease; bee venom; melittin; biofilms; persisters; antibiotic resistance Lyme disease; bee venom; melittin; biofilms; persisters; antibiotic resistance
►▼ Show Figures 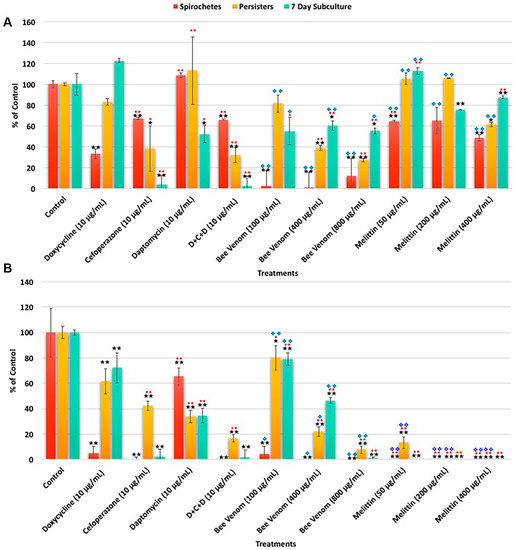