Livestock-Associated MRSA: The Impact on Humans
Previous Article in Journal

Learning Processes and Trajectories for the Reduction of Antibiotic Use in Pig Farming: A Qualitative Approach

In Vietnam, commercial disinfectants containing quaternary ammonium compounds (QACs) are commonly used in pig and poultry farms to maintain hygiene during production. We hypothesized that sustained exposure to sub-bactericidal concentrations of QAC-based disinfectants may result in increased levels of antimicrobial resistance (AMR) among Enterobacteriacea due to the increase of efflux pump expression. To test this hypothesis we exposed six antimicrobial-susceptible Escherichia coli (E. coli) and six antimicrobial-susceptible non-typhoidal Salmonella (NTS) isolates to increasing concentrations of a commonly used commercial disinfectant containing a mix of benzalkonium chloride and glutaraldehyde. Over the 12-day experiment, strains exhibited a significant change in their minimum inhibitory concentration (MIC) of the disinfectant product (mean increase of 31% (SD ± 40)) (p = 0.02, paired Wilcoxon test). Increases in MIC for the disinfectant product were strongly correlated with increases in MIC (or decreases in inhibition zone) for all antimicrobials (Pearson’s correlation coefficient 0.71–0.83, all p < 0.01). The greatest increases in MIC (or decreases in inhibition zone) were observed for ampicillin, tetracycline, ciprofloxacin, and chloramphenicol, and the smallest for gentamicin, trimethoprim/sulphamethoxazole. The treatment of 155 representative E. coli isolates from farmed and wild animals in the Mekong Delta (Vietnam) with phenyl-arginine beta-naphthylamide (PAβN), a generic efflux pump inhibitor, resulted in reductions in the prevalence of AMR ranging from 0.7% to 3.3% in these organisms, indicating a small contribution of efflux pumps on the observed prevalence of AMR on farms. These results suggest that the mass usage of commercial disinfectants, many of which contain QACs, is potentially a contributing factor on the generation and maintenance of AMR in animal production in Vietnam. View Full-Text
Keywords: disinfectant; antimicrobials; adaptation; efflux pumps disinfectant; antimicrobials; adaptation; efflux pumps
►▼ Show Figures 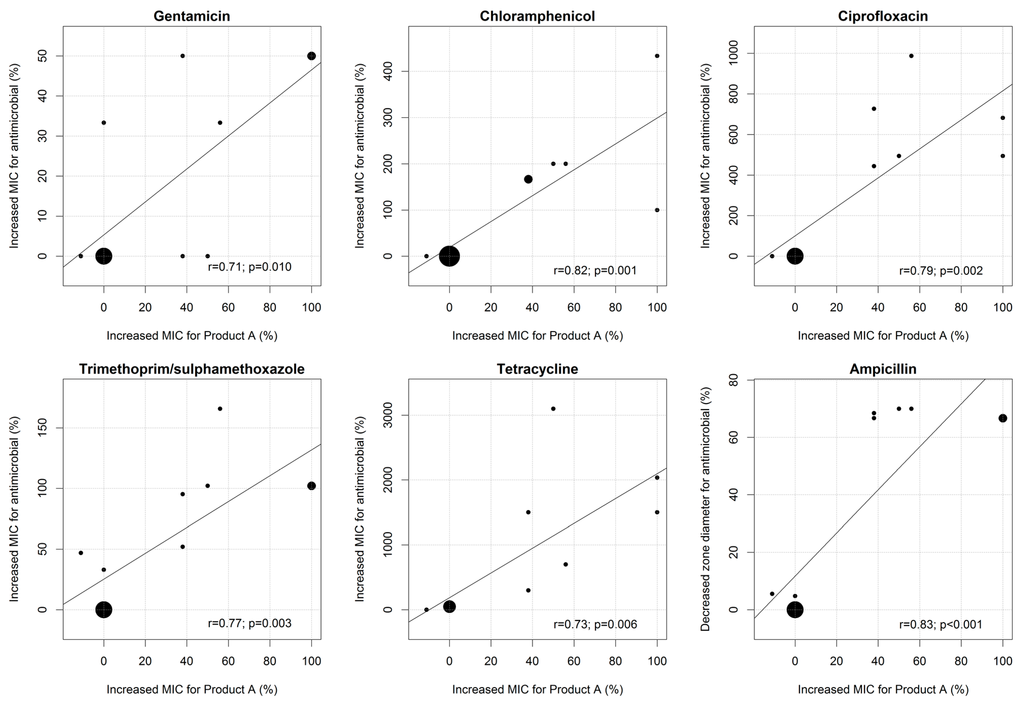