Antibiotic Resistance in Wastewater Treatment Plants and Transmission Risks for Employees and Residents: The Concept of the AWARE Study
Previous Article in Journal

Giardiasis is an intestinal protozoal disease caused by Giardia lamblia. The disease became a global health issue due to development of resistance to commonly used drugs. Since many plant-derived products have been used to treat many parasitic infestations, we aimed to assess the therapeutic utility of Artemisia annua (A. annua) for giardiasis. We showed that NO production was significantly reduced whereas serum levels of IL-6, IFN-γ, and TNF-α were elevated in infected hamsters compared to uninfected ones. Additionally, infection resulted in increased numbers of intraepithelial lymphocytes and reduced villi heights, goblet cell numbers, and muscularis externa thickness. We also showed that inducible NO synthase (iNOS) and caspase-3 were elevated in the intestine of infected animals. However, treatment with A. annua significantly reduced the intestinal trophozoite counts and IEL numbers, serum IL-6, IFN-γ, and TNF-α, while increasing NO and restoring villi heights, GC numbers, and ME thickness. Moreover, A. annua treatment resulted in lower levels of caspase-3, which indicates a protective effect from apoptotic cell death. Interestingly, A. annua therapeutic effects are comparable to metronidazole. In conclusion, our results show that A. annua extract is effective in alleviating infection-induced intestinal inflammation and pathological effects, which implies its potential therapeutic utility in controlling giardiasis. View Full-Text
Keywords: giardiasis; NO; IL-6; TNF-α; IFN-γ giardiasis; NO; IL-6; TNF-α; IFN-γ
►▼ Show Figures 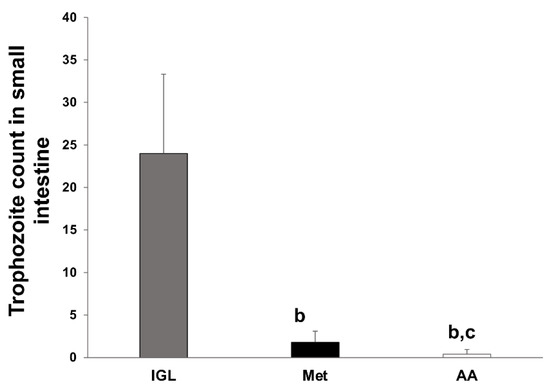