We study the transport properties of a wire-dot system coupled to a cavity and a photon reservoir. The system is considered to be microstructured from a two-dimensional electron gas in a GaAs heterostructure. The 3D photon cavity is active in the far-infrared or the terahertz regime. Tuning the photon energy, Rabi-resonant states emerge and in turn resonant current peaks are observed. We demonstrate the effects of the cavity–photon reservoir coupling, the mean photon number in the reservoir, the electron–photon coupling and the photon polarization on the intraband transitions occurring between the Rabi-resonant states, and on the corresponding resonant current peaks. The Rabi-splitting can be controlled by the photon polarization and the electron–photon coupling strength. In the selected range of the parameters, the electron–photon coupling and the cavity-environment coupling strengths, we observe the results of the Purcell effect enhancing the current peaks through the cavity by increasing the cavity–reservoir coupling, while they decrease with increasing electron–photon coupling. In addition, the resonant current peaks are also sensitive to the mean number of photons in the reservoir. View Full-Text
Keywords: quantum transport; quantum dot; cavity-quantum electrodynamics; quantum master equation; electro-optical effects quantum transport; quantum dot; cavity-quantum electrodynamics; quantum master equation; electro-optical effects
►▼ Show Figures 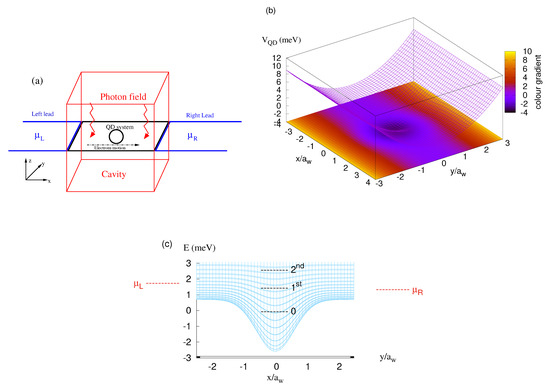