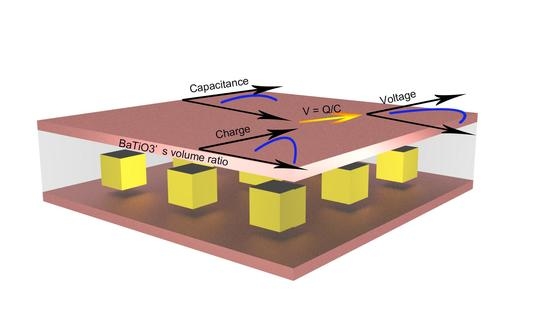 With the development of nanotechnology and micro-electromechanical systems (MEMS), the implantable medical devices, personal electronics, and distributed networks have been widely explored to facilitate people’s daily life. Despite the convenience brought by these technologies, some potential problems begin to emerge because of the limited capacity of traditional batteries used in the above devices. It is especially inconvenient to replace depleted batteries for implantable medical devices because it is a miserable experience for patients and a high risk surgical procedure for surgeons. Even worse, among the numerous nodes in distributed sensor networks, it is almost impossible to find the nodes running out of power. To solve the above-mentioned problems, piezoelectric nanogenerator [1], which can harvest abundant in vivo, in vitro body motion energy and environmental mechanical energy, is developed to provide power supply for the implantable medical devices [2,3,4,5,6,7], personal electronics [8,9,10,11,12,13,14,15], and distributed sensor networks. As a power supply, the electric output and endurance are two key issues for piezoelectric nanogenerator’s (PENG’s) practical applications. Composite PENG, based on inorganic piezoelectric material and organic polymer, is a promising candidate self-powered generators with both good flexibility and high piezoelectric coefficient.
For the preparation of composite PENG, the key issues to be solved are how to disperse the ferroelectric materials uniformly in the polymer matrix and to find out at which ratio of the ferroelectric material, the PENG can output the maximum electricity. Due to the polymer matrix’s sticky and hydrophobic properties, it is hard to obtain a well-distributed composite by dispersing the ferroelectric material directly into the polymer matrix. In order to solve these problems, multiwalled carbon nanotubes [16,17], Cu nanorods [18], ZnS nanorods [19], virus templates [20], and bacterial cellulose [21] fillers have been used to facilitate the dispersion of the ferroelectric material, because the ferroelectric material can form a complex mixture with filler-based-entangled network structure. Some of the research results showed the existence of an optimal ratio in the ferroelectric material’s ratio in the composite PENG [18,21,22]. Therefore, systematic theoretical research is needed to study this phenomenon for the development of composite PENG.
In this paper, we studied the output voltage of the BaTiO3/PDMS composite PENG with different volume ratios of evenly distributed BaTiO3 cubes, and found the existence of an optimal volume ratio (46%) of the BaTiO3 cubes at which the PENG can output the highest voltage, resulting from the trade-off between the surface charge and capacitance of the composite PENG.

To obtain the composite PENG’s open circuit voltage, we need to solve the following governing equations for piezoelectric materials:
σp = cpqεq − ekpEk,
Di = eiqεq + κikEk,
where σp is the stress tensor, and εq is the strain tensor. To keep the tensor equation compact, the Voigt notion was used to reduce the 3 × 3 symmetric stress tensor σmn and strain tensor εmn where m, n ∈ (x, y, z), to 6-dimensional vectors σq and εp where q, p ∈ (xx, yy, zz, yz, zx, xy), cpq is the linear elastic constant, ekp is the linear piezoelectric coefficient, κik is the dielectric constant, Ek is the electric field, and Di is the electric displacement. In this study, these equations are solved by the COMSOL software package (5.1, COMSOL Co., Ltd., Shanghai, China).
The structure of the simulated BaTiO3/PDMS composite PENG is schematically shown in Figure 1, where the BaTiO3/PDMS composite is sandwiched between the top and bottom electrodes. The size of the PDMS matrix is 460 × 460 × 40 μm, and the size of the individual BaTiO3 cube poling along the z axis is 30 × 30 × 30 μm, and the cubes are uniformly distributed in the matrix. In practice, it is inevitable for the BaTiO3 particles/polymer based PENG to have polymer between the electrode and BaTiO3. As shown in Figure 1, PDMS layer between the electrode and the BaTiO3 cubes in 5 μm thickness was used to mimic this situation. In practical calculations, the electrodes are not added, the bottom of the composite was ground and fixed, the charge on the side walls and top is set to be zero, a stress of 0.5 MPa is exerted on the top surface. BaTiO3/PDMS composite containing, 9, 16, 25, 36, 49, 64, 81, 100, 121, 144, 169, 196, and 225 BaTiO3 cubes are respectively calculated. The corresponding volume ratios are 2.9%, 5.1%, 8.0%, 11.5%, 15.6%, 20.4%, 25.8%, 31.9%, 38.6%, 45.9%, 53.9%, 62.5%, and 71.8%, respectively. After the calculation, the average electric potential of the top surface is the PENG’s open circuit voltage.

In this paper, we studied the output voltage of the BaTiO3/PDMS composite PENG with different volume ratios of evenly distributed BaTiO3 cubes, and find that an optimal volume ratio (46%) of the BaTiO3 cubes exists at which the PENG can output the highest voltage. The optimal ratio is a result of the trade-off between the surface charge and capacitance of the composite PENG. This optimal volume ratio is stable even if the Young’s modulus and permittivity of the polymer matrix are changed. Finally, after a 0.5 MPa, 1000 Hz square wave force was exerted, the PENG at the optimal volume ratio can output a current of 23.2 nA, voltage of 1.16 V on the external load with resistance of 50 MΩ.

We sincerely appreciate the support from NSFC (No. 51322203, 51472111), the National Program for Support of Top-notch Young Professionals, the Fundamental Research Funds for the Central Universities (No. lzujbky-2016-k02). 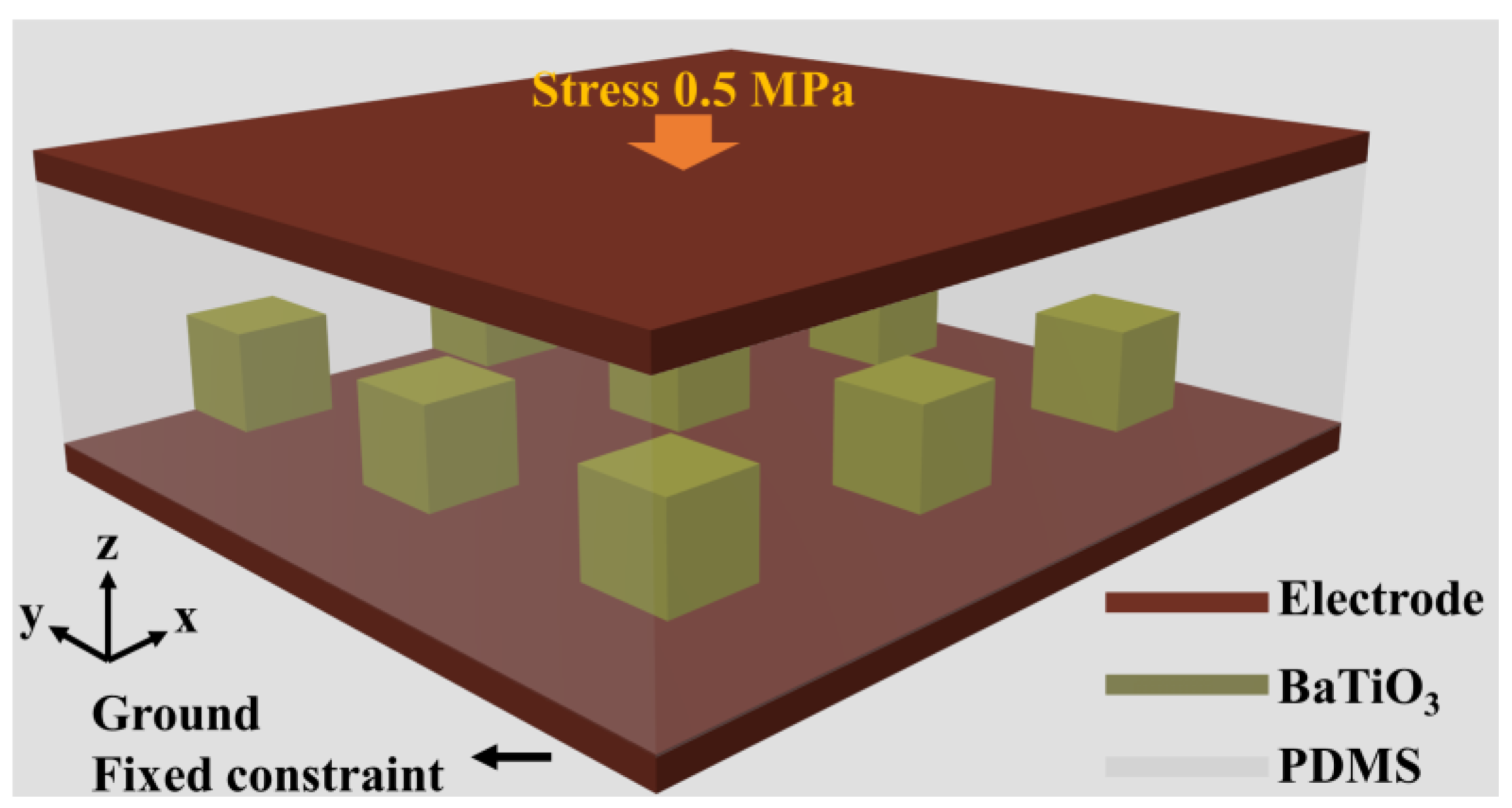 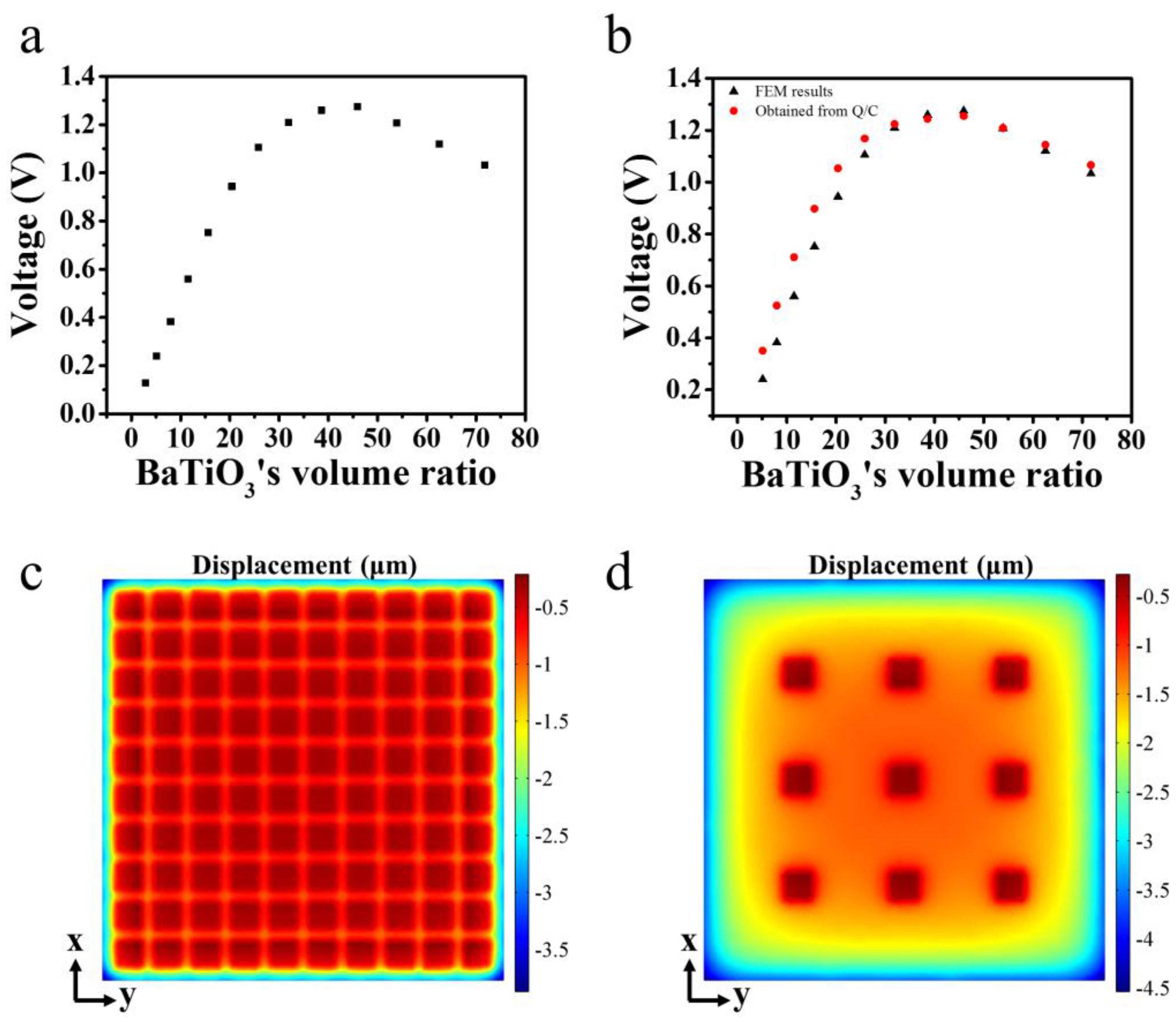