:
Contrast imaging agents need to be cleared in a reasonable time (less than 72 h), so it is quite urgent to understand the structure, biocompatibility, and metabolism features of imaging agents. In this work, luminescent Cu(I)-GSH complex and their derivative oxidized Cu(II)-GSSG complex have been easily synthesized. Through systematically probing the renal clearance and biodistribution of the as-prepared copper complexes, we found that Cu(I)-GSH complex revealed much more efficient renal clearance and remarkably lower liver accumulation than that of their oxidation states, which could be due to strong protein binding of partial forms of Cu(II)-GSSG complex. Besides, we also attempted to incorporate radioactive copper-64 into Cu(I)-GSH complex for the synthesis of radioactive contrast agent. Indeed, the as-prepared radioactive Cu(I)-GSH complex also showed consistent high efficiency renal excretion, allowing them to be potential PET imaging agents in clinical translation.
Keywords:
renal clearable; luminescence; copper complexes; biodistribution; PET imaging 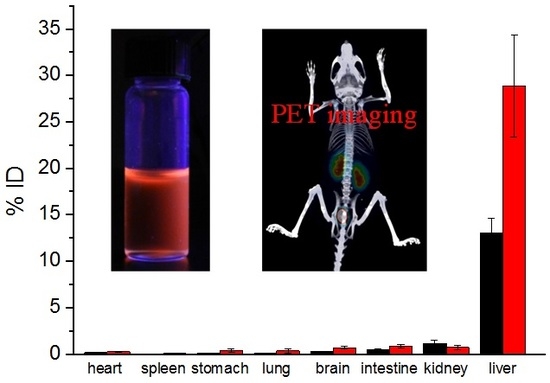 The development of contrast agents for bioimaging has aroused great interest in optical imaging, biochemistry, and nanomaterials, due to their vital significance in the early diagnosis of various diseases [1]. In order to propel the contrast and enhance the precision of diagnosis, diverse contrast agents, such as dyes and complexes, have been extensively investigated and some of them show promising clinical operation [2,3,4]. More attractively, thanks to the unique electronic, optical, and magnetic properties, nanoparticles have received much attention in the exploration of contrast probes [5,6]. For example, fluorescence nanoparticles (quantum dots (QDs), metal nanoparticles) can be suitably used in optical imaging system, while magnetic nanoparticles (Fe3O4) can serve as magnetic resonance imaging agents [7]. In contrast to the conventional imaging molecular probes, nanoparticle-based contrast probes demonstrate many advantages, including intensive fluorescence, high paramagnetism, and so on [8,9].
Fluorescence, as a low-cost and non-destructive imaging technique, has been widely employed in preclinical investigations, revealing great promise to shift diagnostic and therapeutic modalities to clinical practice [10]. However, because of the adverse effects of quick bioaccumulation in the reticuloendothelial system (RES; e.g., liver and spleen), most fluorescence agents are not compatible to the biotic issues and thus cannot be adopted in human clinical trace [11]. Therefore, the US Food and Drug Administration (FDA) has issued warnings on some of contrast probes, which can often induce severe side effects and even organ dysfunction [12]. For this reason, the fluorescence contrast agents not only need favorable biocompatibility, but also quick clearance without serious accumulation in organs/tissues after imaging. In our recent works, we found that the decomposable luminescent silver and copper nanoparticles were also able to be eliminated via renal system, different from conventional nanoparticles that were mainly accumulated in the RES and other vital organs/tissues [13,14]. These examples are the initial studies that demonstrated degradable nanoparticles into complexes could also be excreted through kidneys, revealing significant understanding of nanotoxicity and dissociation behavior of inorganic nanoparticles. Actually, diverse small molecular fluorescence probes have demonstrated potential translation to clinical applications [15,16,17,18,19]. While important achievements have been attained in the fabrication of renal clearable probes, further understanding of the charge effect of probes in in vivo metabolism was seldom considered.
Copper, the third most abundant trace element in the human body, is essential for the normal growth and development of animals and human, including erythropoiesis, energy production, nerve conduction, enzyme catalysis, and immune system, etc. [20]. Copper deficiency results in anemia, impaired growth, bone abnormalities, frequent risk of infections, abnormal metabolism, and so on [21]. In contrast, excess copper intake in the body can cause oxidative stress, acute toxicity, and diseases (e.g., Wilson disease) [22]. Although copper reveals vital importance in living organisms, it is barely employed in the biological applications except antibacterial and antifouling, etc. [23]. In this work, we employed glutathione (GSH), which is the most predominant tripeptide biothiol in cells, to coordinate copper ions for the synthesis of luminescent Cu(I)-GSH complex. The as-prepared luminescent Cu(I)-GSH complex reacted easily with molecular oxygen and form non-luminescent Cu(II)-glutathione disulfide (Cu(II)-GSSG) complex [24,25,26]. Through systematic investigation of the renal elimination and biodistribution of two different complexes, we found that much more (~40%) of the Cu(I)-GSH complex can be excreted from kidney than Cu(II)-GSSG complex in 24 h, although their compositions are similar. Consequently, the quantitative analysis of Cu(I)-GSH and Cu(II)-GSSG complexes in vivo is fundamentally significant for further understanding the valence-dependent renal clearance difference and designing various other renal clearable materials with low toxicity towards clinical translation.

Glutathione (GSH) and sodium hydroxide (NaOH) were purchased from Aldrich. Hydrochloric acid (HCl, 12.1 M), cupric chloride anhydrous (CuCl2), and ethanol were obtained from Fisher Scientific (275 Aiken Rd, Asheville, NC 28804, USA). Radioactive 64CuCl2 solution was provided by University of Wisconsin-Madison. Water was deionized with a Milli-Q system (resistivity ≥ 18.2 MΩ·cm) prior to use. Phosphate buffered saline (PBS) buffer was bought from Lonza. All the chemicals are used as received unless specified.

First, 4 mmol of GSH dissolved in 20 mL water was mixed with 20 mL CuCl2 (1 mmol) solution to form a cloudy mixture under stirring. After tuning the pH value to ~4 via 5 M NaOH solution, the mixture turned clear with light yellow color and showed red fluorescence, and the Cu(I)-GSH complex was synthesized with total volume of 50 mL after adding extra deionized water (DI) water. The as-prepared Cu(I)-GSH complex solution was stored under room atmospheres for about one week in the closed vials and the solution color changed to deep blue, indicating the Cu(II)-GSSG complex was successfully achieved.
For animal study, the as-prepared complexes were purified by adding three times volume of ethanol (21,000 g, 1 min) and the precipitates were dried by N2 purge. After redissolved in phosphate buffered saline (PBS), the complexes were immediately iv-injected into mice.

As Animal Care and Use Committee required, the animal studies were implemented under their guidelines [27]. The BALB/c mice of 6–8 weeks old (~20 g), were ordered from the standard source and housed in ventilated cages under standard environmental conditions (23 ± 1 °C, 50 ± 5% humidity and a 12/12 h light/dark cycle) with free access to water and standard laboratory diet.

The mice were sacrificed at 24 h (n = 3) after iv-injection of Cu(I)-GSH and Cu(II)-GSSG complexes, respectively. The collected organs were weighed and the copper contents were obtained from the ICP-MS (Fisher Scientific, Asheville, NC, USA).

The collected organs/tissues were weighed and the copper contents were received via the ICP-MS analysis. The organs, tissues, and blood were dissolved in 2 mL 70% nitric acid in screw-capped glass bottles (20 mL) under sonication for over 12 h, followed by evaporating acid. The residue was then washed by 1% HNO3 with final constant volume of 10 mL and centrifuged at 4000 rpm for 10 min to remove precipitates. The copper contents of the resultant clear samples were gained by a PerkinElmer-SCIEXELAN 6100 DRC Mass Spectrometry (940 Winter Street, Waltham, MA, USA). In view of the background of copper, the average copper contents in the various organs/tissues from three BALB/c mice were analyzed via the same treatment process and deducted in the calculation of copper biodistribution.

The used 64Cu-doped Cu(I)-GSH for PET imaging was synthesized and purified like the previous process with minor modification of adding radioactive 64CuCl2. In vivo mouse imaging was carried out on a Siemens Inveon PET-CT multimodality system (Siemens Medical Solutions, Knoxville, TN, USA) with spatial resolution of ~1.5 mm. 64Cu-doped Cu(I)-GSH was administered to the BALB/c mouse (6–8 weeks) via iv-injection. PET images were collected immediately post injection (p.i.) for 1 h. The CT projections (360/rotation) were conducted with a power of 80 kV(p), current of 500 μA, exposure time of 145 ms, and binning size of 4. The first 1 h PET images were reconstructed into 20 frames of 180 s using a 3D Ordered Subsets Expectation Maximization (OSEM3D/MAP) algorithm. The CT reconstruction protocol used a down sample factor of 2, was set to interpolate bilinearly, and used a Shepp–Logan filter. The PET and CT images were coregistered in Inveon Acquisition Workplace (Siemens Medical Solutions, Knoxville, TN, USA) for analysis. Circular regions of interest (ROI) were drawn manually, encompassing the kidney and bladder in all planes containing the organs. The target activity was calculated as percentage injected dose per gram (%ID/g), which is defined as (activity (mCi/mL))/(total injected dose (mCi))/density (assuming density = 1 g/mL).

In summary, we have successfully synthesized luminescent Cu(I)-GSH complex and oxidized non-luminescent Cu(II)-GSSG complex, followed by studying their clearance behavior and in vivo distribution. It has been found that there is obvious difference in renal clearance and liver accumulation of two kinds of copper complexes. Cu(I)-GSH complex showed much higher renal clearance and lower liver accumulation than that of Cu(II)-GSSG complex, which was ascribed to the higher negative charge of Cu(I)-GSH complex being able to facilitate greater clearance than Cu(II)-GSSG complex [39,40]. Moreover, we have demonstrated radioactive Cu(I)-GSH complex can act as a potential PET contrast agent. To our best knowledge, this is the first example to study the valence-dependent clearance difference of copper/glutathione complexes that may serve as a biological imaging agent. Thus, it is meaningful for understanding the toxic metal ions and oxygen species, and metabolism behavior of various promising in vivo agents. 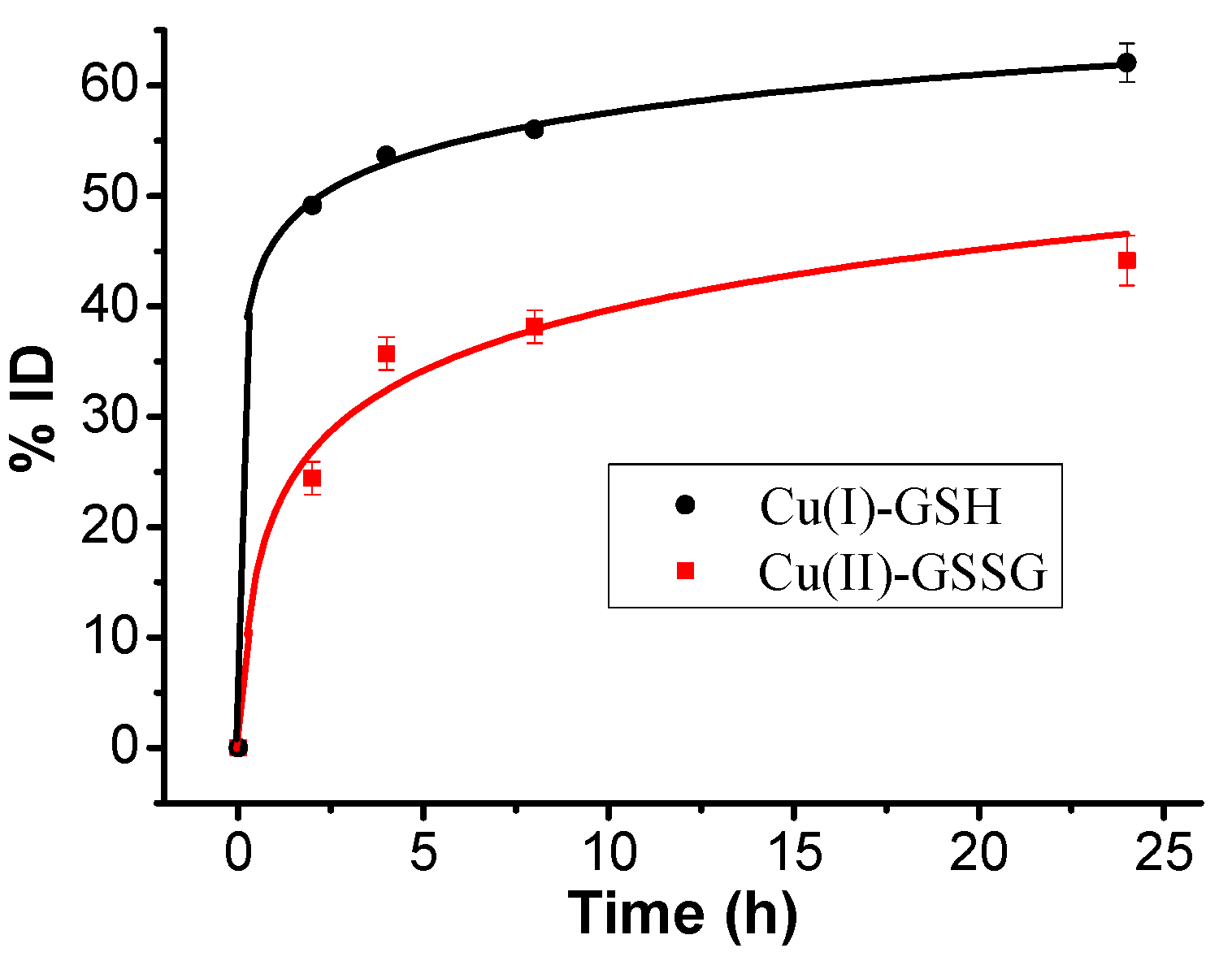 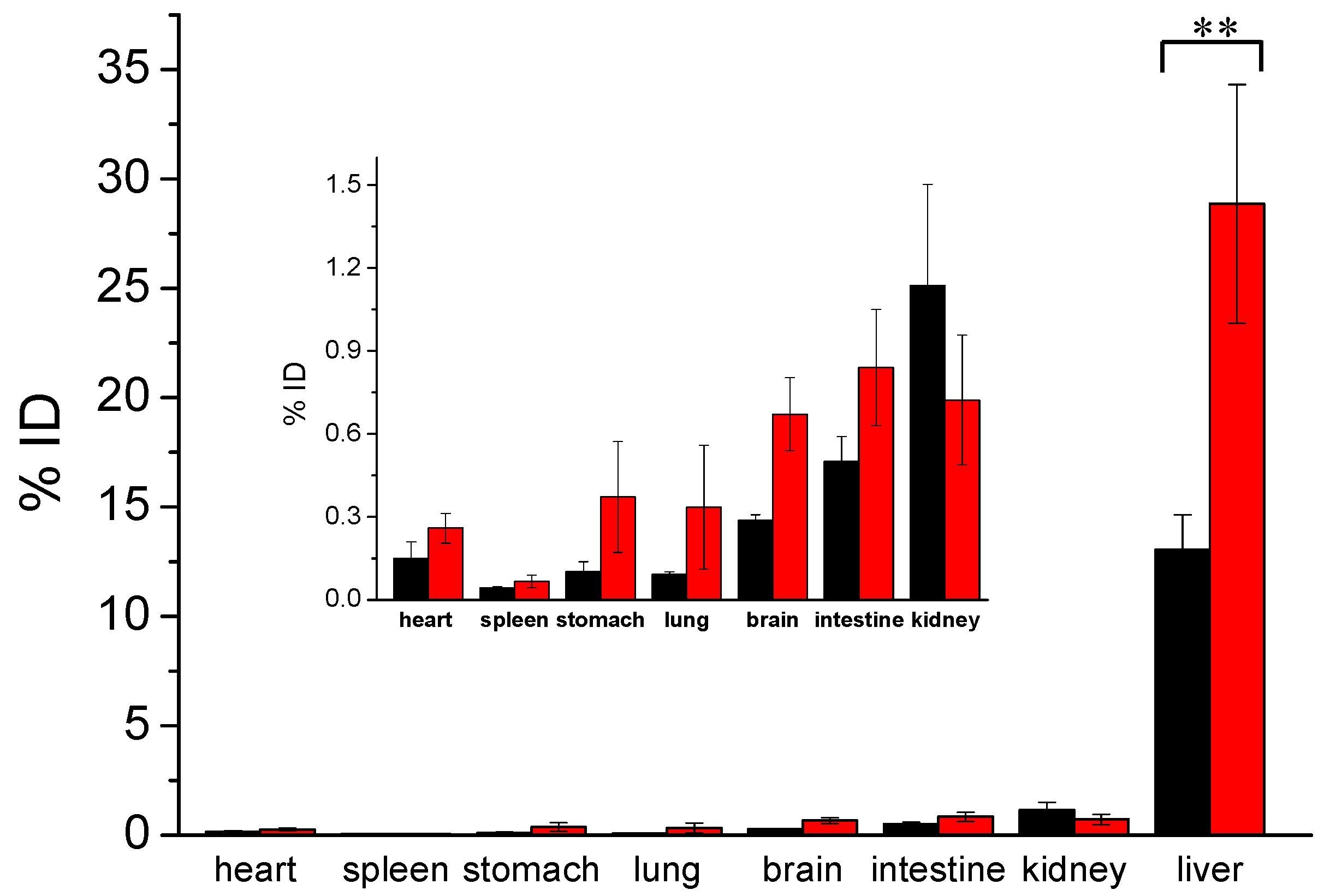