Oxide thin film transistors (TFTs) have attracted considerable interest because of their high-performance. In addition to oxide semiconductors, which were mostly investigated in the last few decades, the metal oxide dielectric plays an important role in the performance of TFTs. In recent years, as a novel structure of dielectrics, a nanolaminate dielectric has been studied and applied widely in optoelectronic devices [1,2]. Waggoner et al. found that nanolaminates can take advantage of different components thereby enhancing the performance and stability of the devices compared to single-layer dielectrics [2]. López et al. demonstrated that the optical properties of dielectrics can be modulated by varying the nanolaminate’s thickness [3]. The TiOx and AlOx nanolaminate dielectric has been applied in organic devices as moisture barriers by Nehm et al., and it is helpful to delay the degradation of OLEDs which was caused by moisture erosion [4]. Meanwhile, so many techniques have been developed to fabricate nanolaminate dielectrics, such as atomic layer deposition (ALD) [5], pulsed plasma-enhanced chemical vapor deposition [6], and cyclic chemical vapor deposition (CVD) [7]. However, the application of solution-process to fabricate nanolaminates were rarely reported, especially for spin-coating. Spin-coating has attracted more and more attention for low cost, simplicity, and high throughput [8]. Metal oxide dielectrics, such as Al2O3, HfO2, and ZrO2 can be obtained easily by spin-coating [9,10,11]. Meanwhile, it has the potential to realize fully transparent, flexible, and portable electronics [12,13].
In this work, we fabricated a series of nanolaminate dielectrics by spin-coating and the relevant structures and properties were investigated. Nanolaminate dielectric was prepared in two approaches: (1) changing the content of Al2O3 in nanolaminates with constant number of bilayers; and (2) changing the number of bilayers with a constant content of Al2O3. The results showed that the properties of the dielectric can be adjusted by controlling the content of the components in nanolaminates and the number of bilayers. It was demonstrated that the performance of nanolaminates fabricated by vacuum-process can also be realized in the solution process. Compared with the vacuum process, the nanolaminate dielectric fabricated by spin-coating succeeded in avoiding rigorous experimental conditions (such as a high ambient vacuum) and complex operation (such as controlling the deposition speed of the thin film) [2,14]. This paper provided a new idea to fabricate dielectrics by the solution process.

The precursor solution was prepared by dissolving ZrOCl2·8H2O and Al(NO3)3·9H2O in methoxyethanol, respectively. Substrates were cleaned by isopropanol, tetrahydrofuran, lotion, deionized water (twice), and isopropanol sequentially, and then dried at 80 °C in an oven. To activate the surface, substrates were treated by O2 atmospheric pressure plasma for 10 min [15]. The precursor was coated at 4000 rpm on substrate for 40 s and the resulting film was annealed in air for 1 h.
To find out the optimized annealing temperature for nanolaminate fabrication, ZrO2 and Al2O3 single layers were prepared. The resulting films were measured by X-ray reflectivity (XRR) to explore the relationship between thickness (as well as density) and annealing temperature. Then, the relationship between thickness and precursor concentration was also explored after the optimized temperature was confirmed. Finally, the results were analyzed by mathematical statistics and tested by Student’s t-test [16,17].
Al2O3-ZrO2 nanolaminates were fabricated by coating the precursor on substrate repeatedly, the resulting film will be annealed at optimized temperature for one hour in air before the next coating. The cross-sectional image of the nanolaminates is shown in Figure 1. The content of the components in the nanolaminates were controlled by the thickness ratio of Al2O3 (T1) and ZrO2 (T2). For example, if T1/T2 was 1:1 in bilayers, the content of Al2O3 was 50%. In this work, the content of Al2O3 was set to 0%, 25%, 50%, 75%, and 100%, and the number of bilayers was set to 1, 2, 3, and 6.
Crystallizations of the nanolaminate dielectric was identified by X-ray diffraction (XRD) at 40 kV and 40 mA, with Cu-kα used as X-ray source. The scanning was carried out at the rate of 0.1°/s from 20° to 70°. A UV-VIS spectrophotometer was used to characterize the transmittance of nanolaminates in a range from 200 nm to 800 nm and Eg can be obtained by the Tauc formula [18]. The microstructure of nanolaminates was analyzed by HR-TEM and EDS. The crystallite size of nanolaminates was calculated by Scherrer’s equation [19]: where D is the crystallite size, is the wavelength of X-ray (15.4056 nm), B is the full width at half maximum (FWHM), is the Bragg angle and k is the Scherrer constant (0.89). Substrates deposited with 150 nm indium tin oxide (ITO) were used to fabricate metal insulator metal (MIM) devices, as shown in Figure 2. ITO acts as the bottom electrode and top electrodes are prepared with aluminum (Al) deposited by an Edward Auto 500 unit. The diameter and thickness of Al electrodes are 400 μm and 150 nm, respectively. A semiconductor parameter analyzer was used to measure breakdown voltage under the direct current, the test voltage was applied from 0 V to 20 V with the step of 0.2 V. Vds was the value of breakdown voltage divided by electrode separation distance. Capacitance was measured by a Keithley4200-SCS unit. Meanwhile, relative permittivity () also can be calculated by the following formula [20]: where C, d, and S are the capacitance, thickness, and area of nanolaminates, respectively, and = 8.854 × 10−12 F/m (permittivity in free space).

To avoid the difference of properties caused by thickness and density, the optimized annealing temperature was explored by Al2O3 and ZrO2 single layers. As shown in Figure 3a,b, the variations of thickness of Al2O3 and ZrO2 single layers tended to be stable when the annealing temperature was above 300 °C. Similarly, the density fluctuation of ZrO2 and Al2O3 was also suppressed significantly when the temperature was higher than 350 °C, as shown in Figure 3c,d. The results showed that thickness and density were relatively stable when the annealing temperature was over 350 °C. Therefore, 400 °C (between 350 °C and 500 °C) was selected as the annealing temperature.
Meanwhile, the percentage marked in Figure 4 showed little difference between the thickness of Al2O3 and ZrO2 single layers, which were coated by precursors with the same concentration. The result was analyzed by mathematical statistics theory, as shown by the linear regression equations in Figure 4. With the concentration increased by 0.1 mol/L, the thicknesses of Al2O3 and ZrO2 were increased by 6.6 nm and 7.21 nm respectively. The result was tested by t-test ( = 0.05). It was demonstrated that the result was reasonable since the test statistics of Al2O3 ( = 17.0264) and ZrO2 ( = 11.3591) were higher than the critical value (). Thus, it is believed that the thickness of the layers which were fabricated by precursors with the same concentration were similar.
Additionally, it was also demonstrated that the conclusions drawn above were suitable for nanolaminates. First of all, the TEM result showed smooth interfaces of nanolaminates, as shown in Figure 5a. That benefits to the coating of next layer. As meanwhile, the layers were dense and had good contact with each other, which was helpful to avoid defects, such as holes. Secondly, the cross-sectional EDS image of nanolaminates showed that there was no diffusion between Al2O3 and ZrO2, as shown in Figure 5b. Thus, the influence of solution permeation caused by the next coating was avoided, which guaranteed the relative independence of thickness and density. Lastly, as the three samples showed in Figure 6b, the thickness of layers in nanolaminates fabricated by the same precursor were uniform. The ratio of thickness was approximate to the ratio of precursor concentration, and the total thicknesses were all around 70 nm. As the results above show, it was verified that 400 °C was the optimized annealing temperature to fabricate nanolaminates.

3.2.3. The Influence of the Number of Bilayers

The main manuscript text was written by Junbiao Peng and Jinglin Wei. Hong Tao, Yanqiong Zheng, and Xubing Lu provided the equipment for characteristics testing of the samples. References were searched by Wei Cai, Zhennan Zhu and Kuankuan Lu. Honglong Ning and Rihui Yao provided advice about the content and the structure of this work. 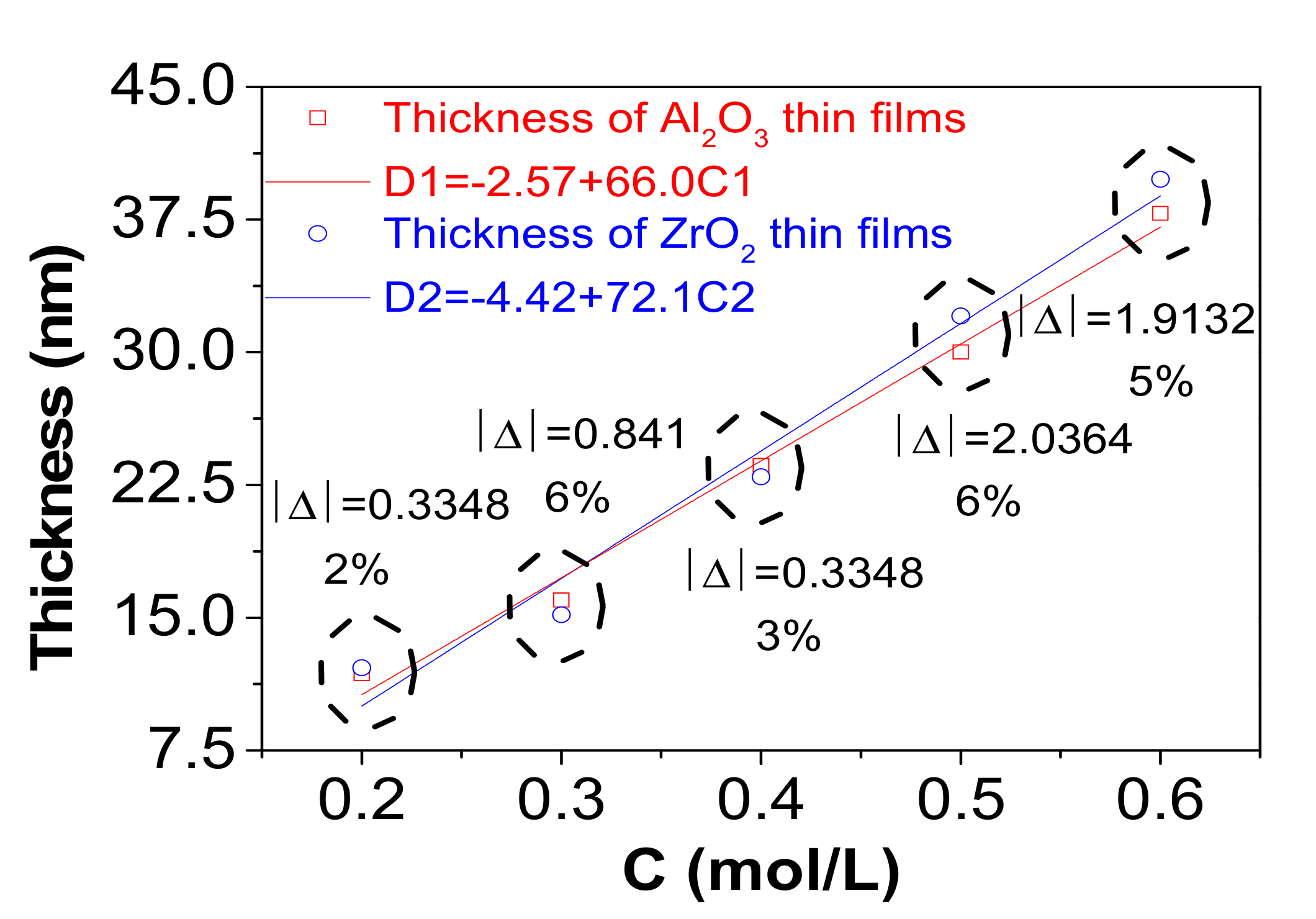 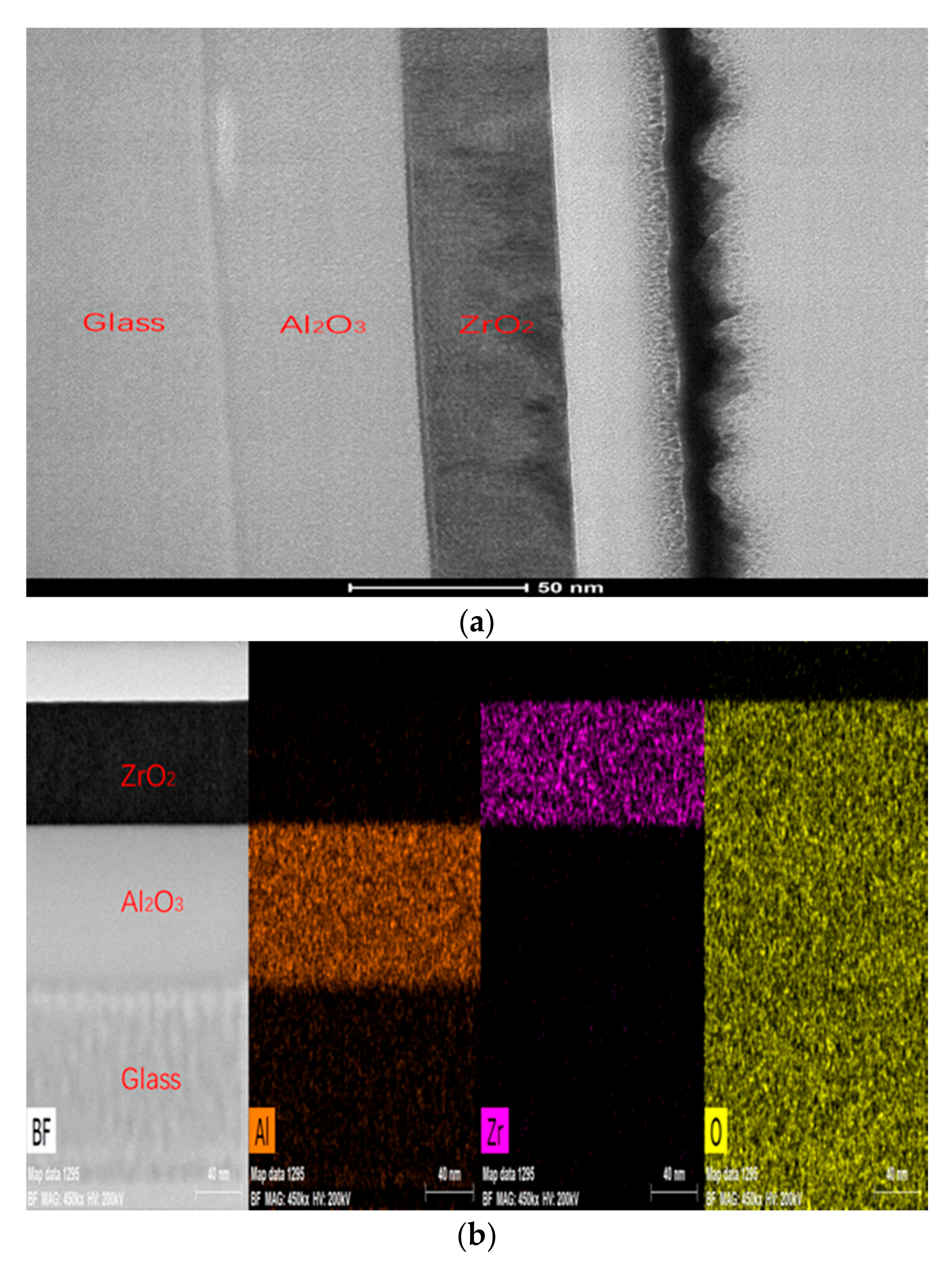 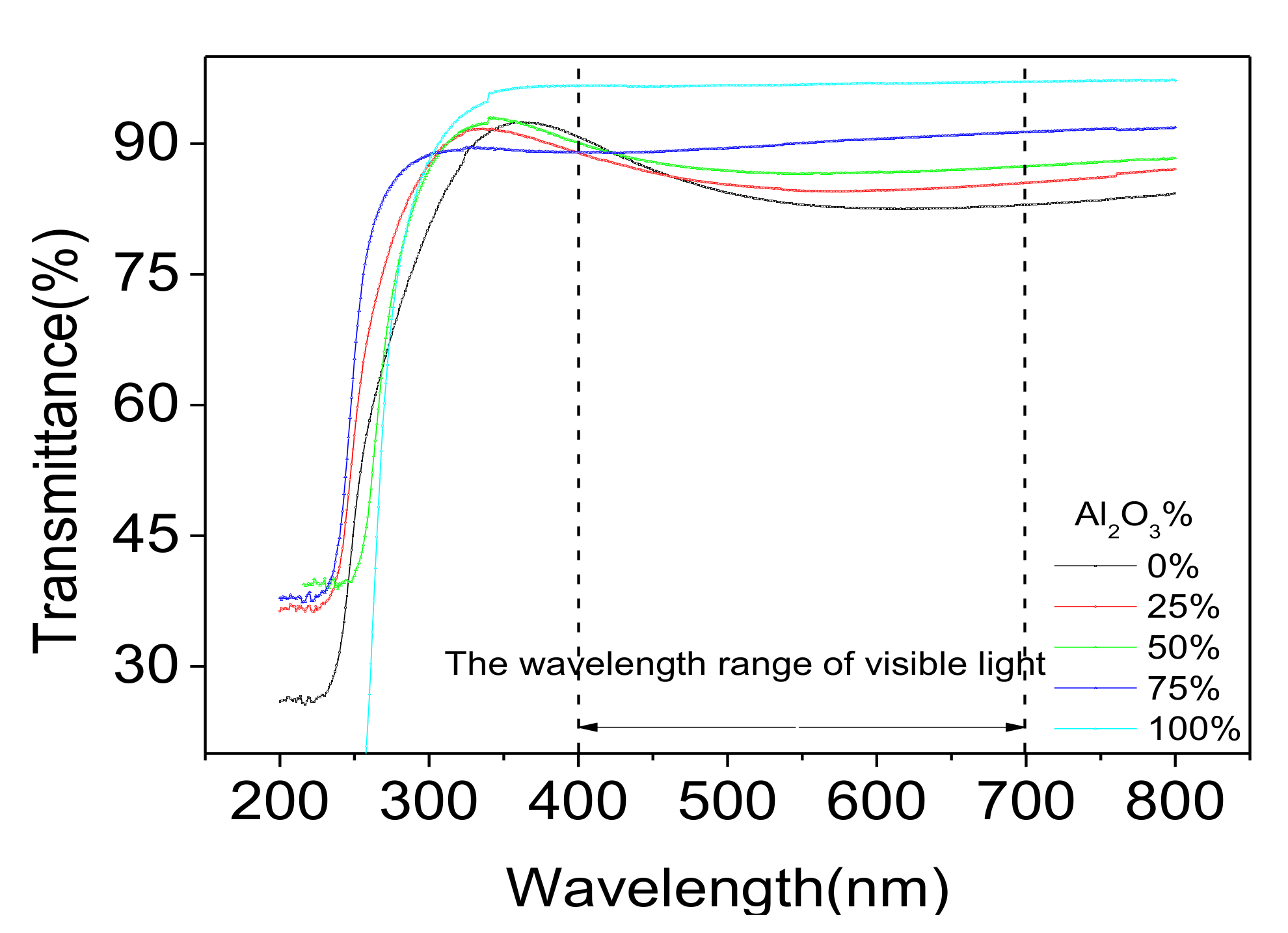 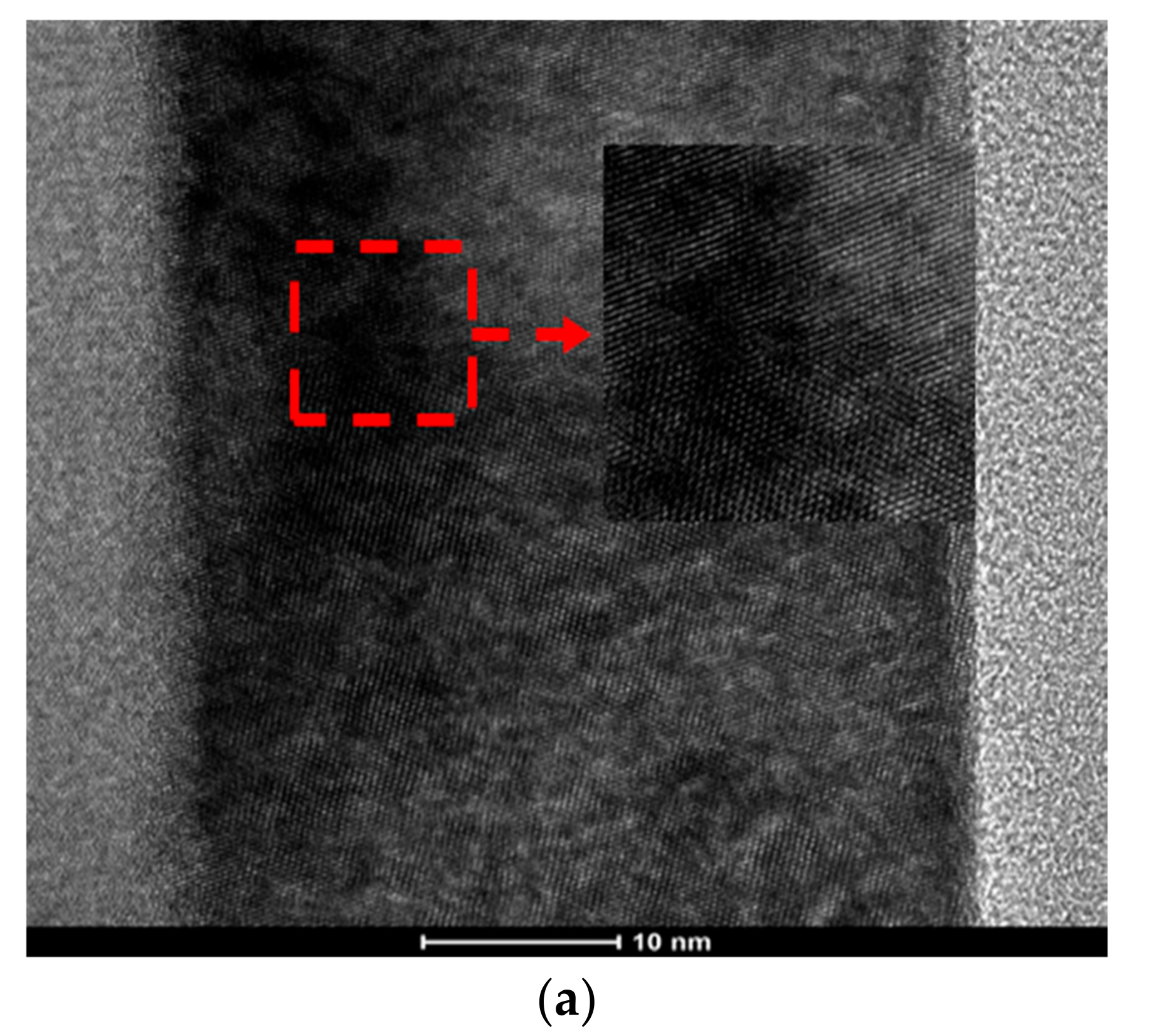