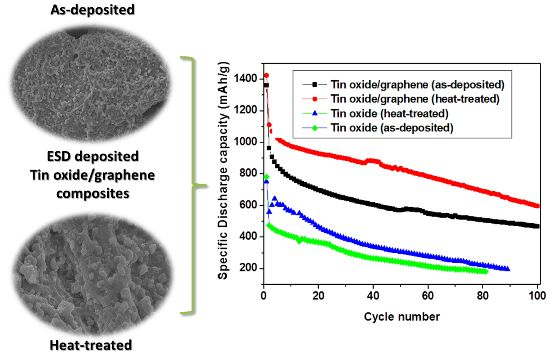 To meet the ever increasing energy requirements for modern communication and transportation systems, much research have been invested in improving the performance of lithium-ion batteries (LIBs). One of the most researched areas is the development of novel electrode materials for LIBs, mostly including the usage and development of nanostructures [1,2,3,4]. Due to their high theoretical specific capacity, amorphous tin oxides have been reported as promising candidates for rechargeable LIB anodes [1,5]. It has been proposed that SnO2 reacts with lithium and forms Sn and lithium oxide in the first step of the reaction [6,7]. This two-step process is depicted in Equations (1) and (2):
SnO2 + 4Li+ + 4e− → 2Li2O + Sn
Sn + xLi+ + xe− → LixSn
The Lithium oxide (Li2O) formed in the first step of the reaction acts as a buffer matrix during the formation of Li–Sn (LixSn) alloys in the second step of the reaction. Lithium is consumed in the first step, which is in general an irreversible reaction and hence results in the loss of lithium. Besides this loss of lithium, there is a large volumetric expansion in SnO2 (>300%) anodes during cycling which results in pulverization of the electrodes and loss of electrical contact. Different methods have been employed to improve the performance of the SnO2 anodes such as the use of nanomaterials [8,9], alloys [10,11], and composites [12,13,14]. Tin oxide and graphene composites, for instance, have shown enhanced electrical performance over that of SnO2 electrodes [15,16].
The addition of graphene can aid in the improvement of electrical conductivity, thereby resulting in better performance of the electrodes. It can also contribute to the capacity because Li+ can adsorb on the surface of the graphene sheet and also along the edges [17]. Graphene has a very high theoretical specific surface area (>2600 m2/g). This high specific surface area of graphene increases the accessible area for the electrolyte ions resulting in better charge-transfer kinetics. Graphene can also act as a buffer for volumetric changes during cycling by acting as an inactive matrix when Sn alloys with Li. The literature reporting the use of tin oxide and graphene composites as LIB electrodes has utilized various methods to fabricate these composites including—self-assembly [15], in situ chemical synthesis [18], hydrolysis [19], reduction [20], etc. Wang et al. [16] reported a capacity of 520 mA·h/g for SnO2/40% graphene composites after 100 cycles tested in the range of 0.01–3.0 V. For the same composition, Aksay et al. [15] reported a capacity of 625 mA·h/g after 100 cycles for anodes tested between 0.02 and 1.5 V. Similarly, for SnO2/34% graphene and SnO2/36% graphene, the capacities obtained were 634 and 513 mA·h/g after 50 and 10 cycles, respectively and the voltage windows used to test were 0.001–3.0 V and 0.05–3.0 V for SnO2/34% graphene and SnO2/36% graphene, respectively [18,19]. The discrepancy in the reported electrochemical performances of the composite electrodes can be attributed to several factors such as synthesis method, voltage window, morphology, etc.
The fabrication of the electrodes can be simplified by depositing the composite material directly on a current collector. This can be achieved by using electrostatic spray deposition technique (ESD). Samples can be tested without the addition of a binder unlike conventional electrode fabrication techniques. In this work, we have fabricated tin oxide/graphene (TG) composite electrodes using electrostatic spray deposition technique (ESD). Two different sets of composite samples namely as-deposited (195 °C) and post-heat treated (280 °C) were studied along with control samples of pure tin oxide both as-deposited (195 °C) and post-heat treated (280 °C). The samples were characterized and the electrochemical performances were analyzed. It is seen that heat-treated TG composites showed enhanced specific capacity and specific energy density over both the as-deposited TG composites and pure tin-oxide samples. The improvement in electrochemical performance of TG composites as compared to pristine tin oxide samples is ascribed to the synergistic action between tin-oxide and graphene whereas the better performance of the heat-treated samples with respect to as-deposited samples can be attributed to the improvement in crystallinity with heat treatment. 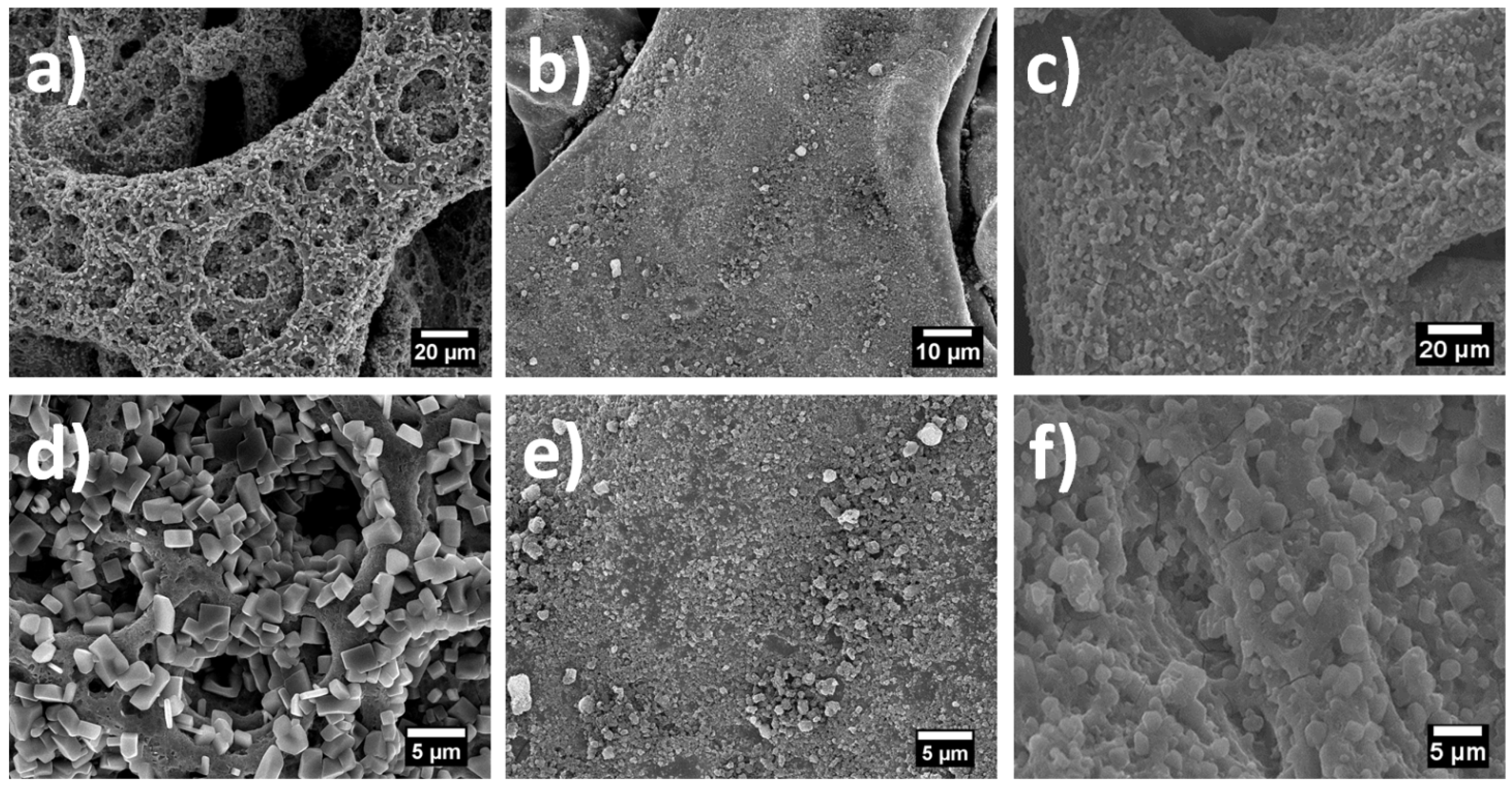 Figure 2 shows the X-ray diffraction patterns of the as-deposited and post-heat treated tin oxide samples and those of as-deposited and post-heat treated TG composites. All the samples for XRD were deposited on a glass substrate to avoid the interference from the Ni foam substrate. The peaks at 2θ = 26°, 34°, 52° were assigned to the (110), (101) and (211) planes of SnO2 [Joint Committee for Powder Diffraction Standards (JCPDS) card No.: 41-1445] respectively for both pure tin oxide and TG composite samples. The graphene peaks (002) at ~27° are overlapped with tin oxide peaks in the composite samples. Peaks from the residual NaCl in the tin oxide powder used in the precursor solution can be observed in the patterns (JCPDS card No.: 05-0628) for both as-deposited tin oxide and the TG composite samples. However, these NaCl peaks are not seen for the heat-treated films, indicating that the heat-treated samples had higher purity than the as-deposited samples.

The energy density of the anodes (Figure 3b) was calculated using the following formula: where Voltage (V) is the voltage window.
At the 70th cycle, the energy density of the as-deposited and heat treated TG composites was 1240 and 1760 W·h/kg. These values are much higher than those of the commercially used graphite anodes, which usually have energy densities in the range of 37.2–74.4 W·h/kg [21].
Figure 5 shows the rate capability of the composite anodes and normalized capacities with respect to the capacity obtained at 0.5 C. The samples were tested at 0.5 C, 1 C, 2 C, 4 C, 6 C, 8 C, and 10 C rates. The rate capability of heat treated TG composite was better than the as-deposited TG composite. The degradation rates of specific discharge capacities with increasing current density were lower for composites at 280 °C. However, both the composites lose their capacity with increasing rate of discharge. At a discharge rate of 10 C, the capacity obtained was only 30% of the capacity obtained at 0.5 C rate for the heat-treated TG composites, whereas it was only 10% for the as-deposited TG composite.
From the above figures and discussions, it can be concluded that (a) The TG composites although had a porous structure but the porosity was not as pronounced as that in tin oxide films; (b) XRD patterns for TG composites showed SnO2 peaks along with graphene peaks. In addition, peaks corresponding to NaCl were observed, indicating the remnant impurity during the sol-gel process. These peaks were not observed for the heat-treated samples, indicating higher levels of purity in the heat-treated samples; (c) The Columbic efficiencies increased in the second cycles for both TG composites at 195 °C and 280 °C indicating a decrease in the number of trapped Li+ and/or the Li+ ions undergoing side reactions; (d) From Figure 4, it is seen that the TG composites at 280 °C exhibit better cycle performance and energy density than both the TG composites at 195 °C and the tin oxide samples; (e) TG composites at 280 °C showed superior rate capability and as well as normalized capacity than the TG composites deposited at 195 °C.

0.108 M NaOH was added slowly to 0.054 M SnCl4. Both the chemicals were purchased from Sigma Aldrich. The resulting sol solution was heated until all the solvent evaporated, leaving behind a white powder. This powder was then used in the preparation of the precursor solution. The precursor solution for tin oxide/graphene composites (TG composites) was prepared by mixing tin oxide and 30 wt.% graphene (Cheaptubes Inc., Brattleboro, VT, USA) with ethylene glycol (Sigma Aldrich, St. Louis, MO, USA) and ethanol (Sigma Aldrich, St. Louis, MO, USA). This solution was then deposited on a nickel foam substrate (Hunan Corun New Energy Co. Ltd, Changsha, China) by using electrostatic spray deposition (ESD) technique at a temperature of 195 °C. Some of the samples deposited were post-heat treated at a temperature of 280 °C in an N2 atmosphere. The morphologies of the as-deposited films were investigated using Scanning electron microscopy (JEOL 6335 FE-SEM, Peabody, MA, USA). X-ray diffraction (XRD) studies were carried out using the D5000 diffracktometer. Electrochemical test cells were assembled in an argon atmosphere using TG thin film samples as anode and lithium as counter and reference electrode in an electrolyte of 1.1M FC-130 dissolved in ethylene carbonate, dimethyl carbonate and diethyl carbonate (EC:DMC:DEC, 1:1:1 w/w/w). Electrochemical tests were carried out between 3.00 and 0.02 V at a rate of 0.2 C.