Organic Thin Films Based on DPP-DTT:C60 Blends Deposited by MAPLE

:
The matrix-assisted pulsed laser evaporation (MAPLE) technique was used for depositing thin films based on a recently developed conjugated polymer, poly[2,5-(2-octyldodecyl)-3,6-diketopyrrolopyrrole-alt-5,5-(2,5-di(thien-2-yl)thieno [3,2-b]thiophene)] (DPP-DTT) and fullerene C60 blends. The targets used in the MAPLE process were obtained by freezing chloroform solutions with different DPP-DTT:C60 weight ratios, with the MAPLE deposition being carried at a low laser fluence, varying the number of laser pulses. The structural, morphological, optical, and electrical properties of the DPP-DTT:C60 blend layers deposited by MAPLE were investigated in order to emphasize the influence of the DPP-DTT:C60 weight ratio and the number of laser pulses on these features. The preservation of the chemical structure of both DPP-DTT and C60 during the MAPLE deposition process is confirmed by the presence of their vibrational fingerprints in the FTIR spectra of the organic thin films. The UV-VIS and photoluminescence spectra of the obtained organic layers reveal the absorption bands attributed to DPP-DTT and the emission bands associated with C60, respectively. The morphology of the DPP-DTT:C60 blend films consists of aggregates and fibril-like structures. Regardless the DPP-DTT:C60 weight ratio and the number of laser pulses used during the MAPLE process, the current–voltage characteristics recorded, under illumination, of all structures developed on the MAPLE deposited layers evidenced a photovoltaic cell behavior. The results proved that the MAPLE emerges as a viable technique for depositing thin films based on conjugated polymers featured by a complex structure that can be further used to develop devices for applications in the solar cell area.
Keywords:
MAPLE; organic thin films; conjugated polymer DPP-DTT; fullerene C60; photovoltaic cell

Conjugated polymer poly[2,5-(2-octyldodecyl)-3,6-diketopyrrolopyrrole-alt-5,5-(2,5-di(thien-2-yl)thieno[3,2-b]thiophene)] (DPP-DTT, Mw ≥ 30,000, PDI ≤ 3) and fullerene C60 were purchased from Ossila (Sheffield, England) while chloroform was acquired from Sigma-Aldrich (Saint Louis, MO, USA). The poly(3,4-ethylenedioxythiophene) polystyrene sulfonate (PEDOT:PSS) solution and ITO/glass with a 20 Ω/square resistance and a roughness lower than 1.8 nm used as substrates for the fabrication of the photovoltaic cells were also bought from Ossila. Thus, before MAPLE deposition, ITO was covered with a PEDOT:PSS thin film using a Chemat Technology spin coater at 6000 rpm speed for 30 s, the obtained coating being annealed for 5 min at 120 °C for improving its stability. Further, this substrate is labelled as ITO/PEDOT:PSS.
In the MAPLE deposition, both organic powders, DPP-DTT and C60, were separately dissolved in chloroform, stirred for several minutes, and then mixed. Further, these solutions with a concentration of 3% weight/volume (w/v) containing DPP-DTT:C60 in different weight ratios (1:1, 1:2 and 1:3) were immersed in liquid nitrogen for 30 min to obtain MAPLE solid targets. During the laser process deposition, an excimer laser beam (ArF*, CompexPro 205, Lambda Physics Coherent, Göttingen, Germany) with λ = 193 nm and τ FWHM∼ 25 ns was focused on the frozen target [26,27,28]. Hence, when the laser source is focused on the target surface, the laser energy is mainly absorbed by the matrix (solvent), which is vaporized together with the organic molecules. Then, the solvent molecules are pumped away from the deposition chamber, with only the organic molecules reaching on the surface of the substrate, resulting in the formation of the thin film [26]. Throughout the deposition process, the target is constantly rotated with a 0.4 Hz frequency for preventing its local drilling and to improve the deposition uniformity. For all depositions, the target–substrate distance (5 cm) and the laser fluence (100 mJ/cm2) were maintained constant. In the same deposition cycle, besides the ITO/glass covered with PEDOT:PSS film used as substrates for developing the photovoltaic structures, glass and silicon were also coated with organic films for the structural, morphological, and optical investigations. Additionally, for comparison reasons, films containing raw organic compounds (DPP-DTT and C60) were deposited by drop casting from the solutions used in the preparation of the MAPLE target films.
The thickness of the organic layers deposited on glass substrates was estimated using an Ambios Technology XP 100 profilometer and given as an average value between three measurements made in different points on each sample.
The vibrational and optical properties of the MAPLE-deposited thin films were evaluated by Fourier transformed infrared spectroscopy (FTIR), UV-VIS spectroscopy, and photoluminescence (PL) techniques. The FTIR spectra were acquired in the 500–3200 cm−1 range on a IRTracer-100 (Shimadzu, Kyoto, Japan) spectrometer, the UV-VIS spectra in the 250–1100 nm range on a Thermo Scientific Evolution 220 Spectrophotometer (Waltham, MA, USA) and the PL spectra in the 450–850 nm range at λex = 435 nm on an FL920 Edinburgh Instruments Spectrometer (Livingston, UK) with a 435 W Xe lamp excitation and double monochromators on both excitation and emission.
The morphological properties of the MAPLE-deposited thin films were investigated by field emission scanning electron microscopy (FESEM) using a Zeiss Merlin Compact field emission microscope (Oberkochen, Germany) and atomic force microscopy (AFM) involving a Nanonics Multiview 4000 system (Jerusalem, Israel). Additionally, optical images of the organic layers were acquired using the same system implied in the AFM measurements.
For the electrical measurements, lithium fluoride (LiF) and aluminium (Al) films with thicknesses of ~1.5 and ~100 nm, respectively, were deposited as back electrodes on the structures formed on ITO by vacuum evaporation (1.6 × 10−6 mbar pressure, substrate at room temperature, substrate rotating) using a Tecuum AG, VCM600-V3-80 (Winterthur, Switzerland) set-up. The current–voltage (J-V) characteristics of the photovoltaic structures developed on the MAPLE-deposited organic films were recorded at room temperature under AM 1.5 illumination using a LOT-Oriel solar simulator (Quantum Design Europe, Darmstadt. Germany) coupled at a Keithley 2602B System Source Meter (Cleveland, OH, USA).

Thin films based on DPP-DTT and C60 blends were deposited by MAPLE technique, the influence of two experimental parameters (the weight ratio between the two components and the number of laser pulses used in the deposition process) on the properties of the obtained DPP-DTT:C60 blend layers being investigated. The presence of the vibrational fingerprints of both organic compounds, DPP-DTT and C60, in the organic layers deposited by MAPLE confirm that their chemical structure is preserved during the laser processing. Regardless the weight ratio between the two organic components and the number of laser pulses used during the laser-assisted deposition, in the UV-VIS spectra of the prepared DPP-DTT:C60 blend layers the absorption bands associated with DPP-DTT can be identified, whereas only in the PL spectra of the thicker blend films obtained at 90 k laser pulses can the emission bands attributed to C60 be observed. The FESEM images show that the surface of the organic films contains aggregates and fibril-like structures. Moreover, the aggregates seem to assemble into the fibril-like structure that further tends to form an interpenetrating network architecture in the thicker layers deposited at 90 k laser pulses. The roughness parameters of the obtained organic blend layers are significantly influenced by the presence of C60 in addition to DPP-DTT and the number of the laser pulses. However, the increase in the DPP-DTT:C60 weight ratio does not affect in a major way the RMS values due to the small size of the fullerene molecule in comparison with that of the DPP-DTT. Regardless the DPP-DTT:C60 weight ratio and the number of laser pulses, the current–voltage characteristics recorded, under illumination, of all the structures developed on the MAPLE-deposited films evidenced a photovoltaic cell behavior. The best electrical parameters were obtained for the sample deposited at 90 k laser pulses with DPP-DTT:C60 in a 1:2 weight ratio. This study proved the potential of the MAPLE technique to be used as a feasible approach in the deposition of the organic thin films based on conjugated polymers, with tailored properties which can be further integrated in organic photovoltaic devices. 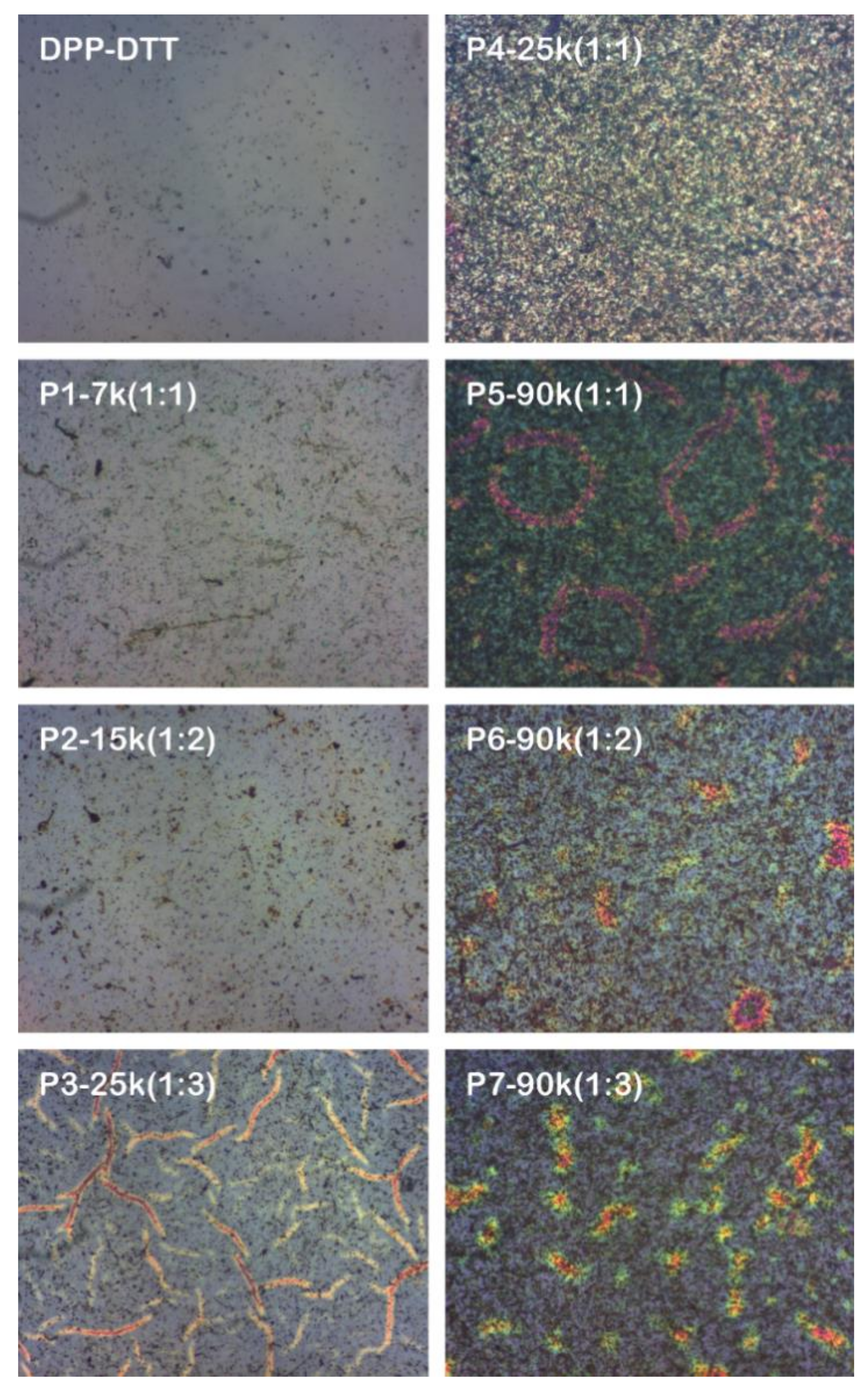 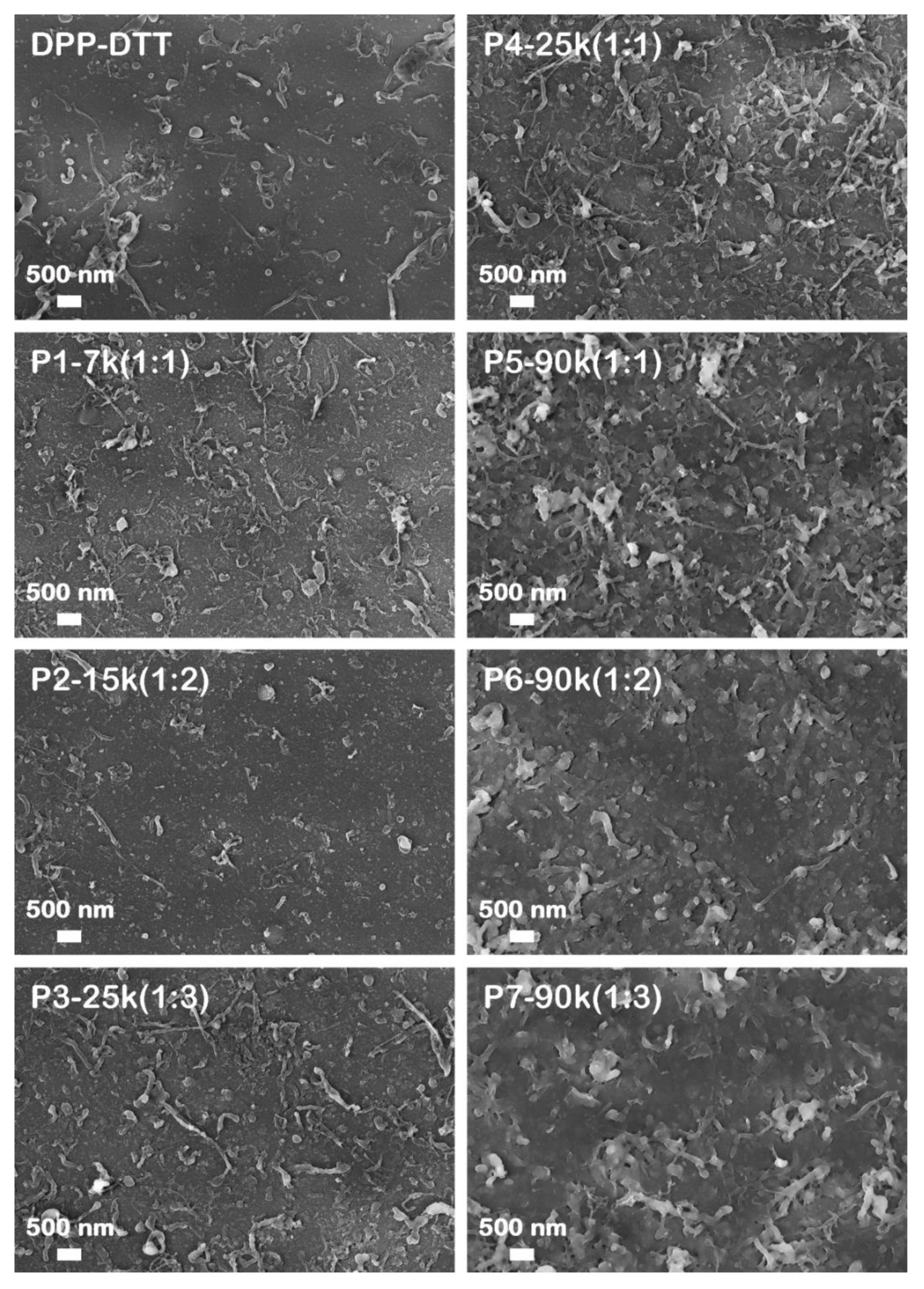 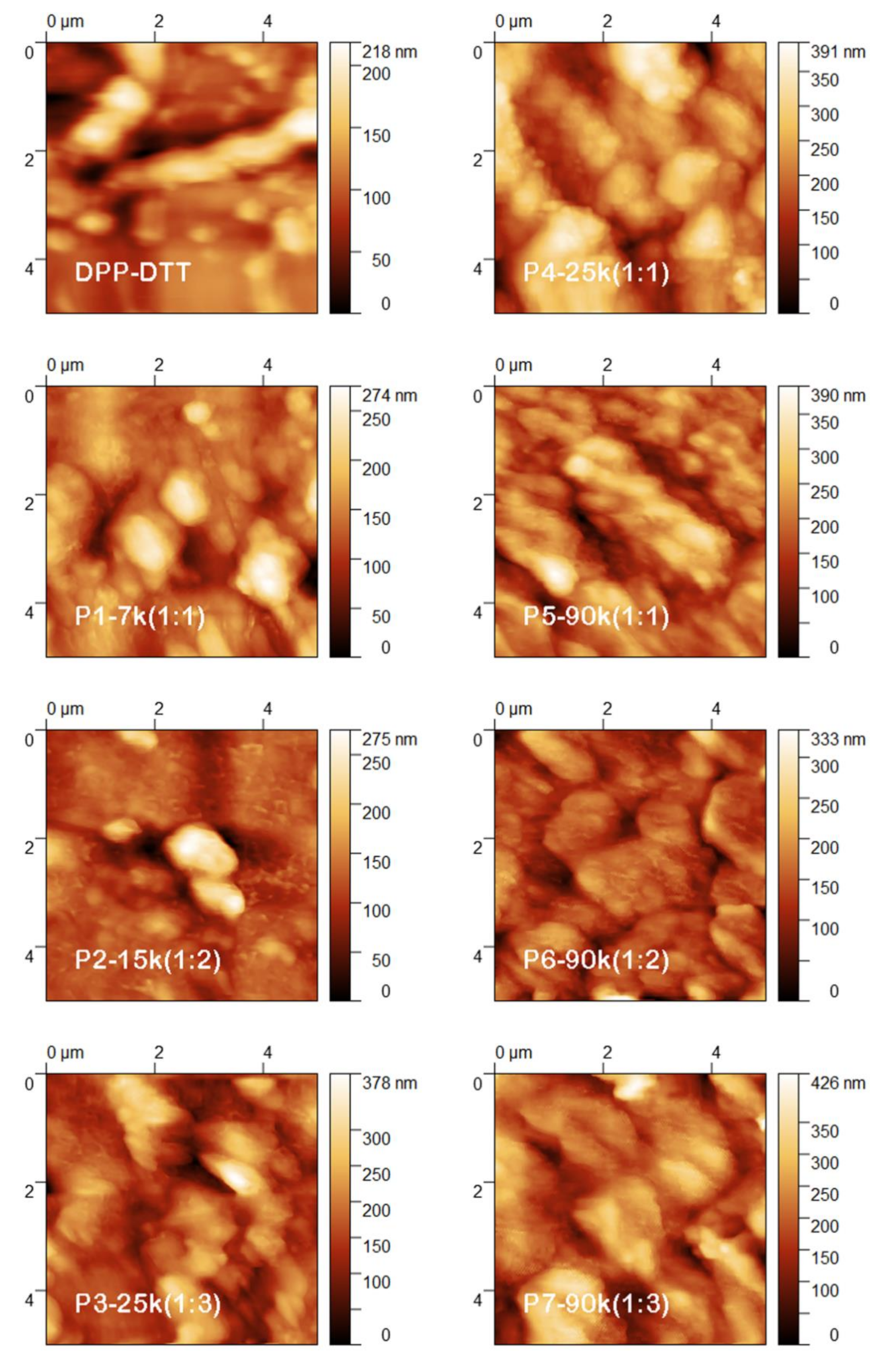 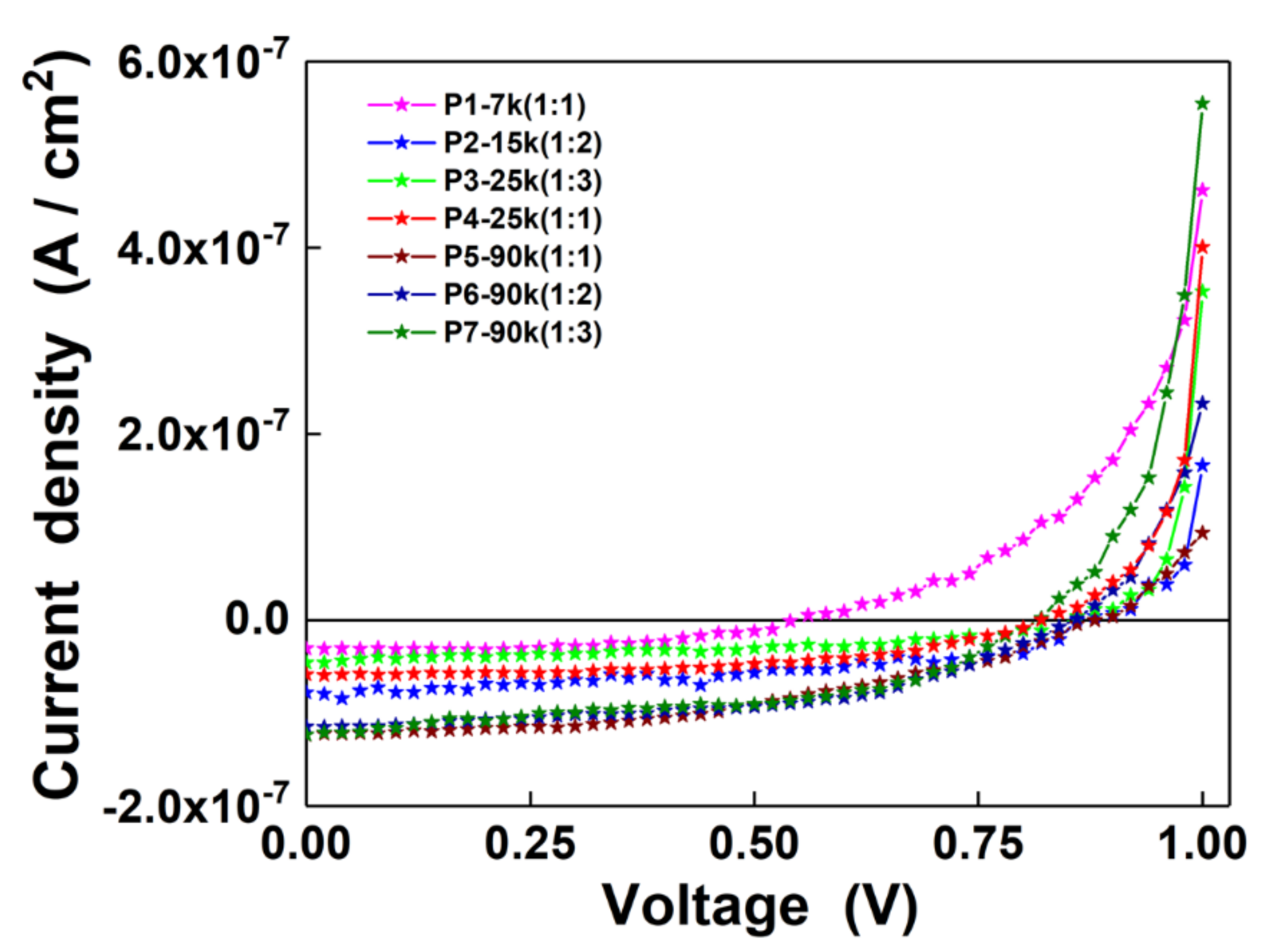