Enhanced Osseointegration of a Modified Titanium Implant with Bound Phospho-Threonine: A Preliminary In Vivo Study
Next Article in Special Issue

Constipation is a gastrointestinal motility disorder that represents a major health problem in Japan. Approximately 26% of young Japanese adult women are reported to have this complaint. We report on the health effects of daily intake of Sujiaonori algal biomaterial (SBM) on constipation on 12 Japanese adult women. Data are from a four-week dietary intervention study on the health effects of daily Sujiaonori supplementation on cardiovascular, skin, and gastrointestinal health in which 32 adult Japanese volunteers (age range: 20–54 years) participated. They underwent clinical and laboratory investigations, and completed two study questionnaires (the brief diet history questionnaire (BDHQ) and the current health questionnaire) before and after dietary intervention. Of the 12 women volunteers with functional constipation, there were six SBM-supplemented subjects who received 3 g of Sujiaonori powder twice daily during meal, whereas the six others (controls) were from the group of those who took 3 g of a power made of 70% corn starch and 30% Japanese spinach mixture. The analysis of data on daily nutrient intake showed no significant dietary changes for nutrients (minerals, proteins, fiber, fat) and calorie intake (except alcohol intake that was reduced) in both groups. In SBM group, a significant reduction of the proportion of women with constipation was observed (p < 0.001), whereas no significant change was noted within the control group (p > 0.05). When both groups were compared, SBM was more effective than the control product; 66.7% (4/6) of SBM-supplemented women had their constipation relieved, whereas only one control (16.7%) controls benefited from dietary intervention (p < 0.001). In addition, no adverse effect was reported in the SBM group, whereas two controls reported nausea at post-survey. These results suggest that Sujiaonori contains compounds that can improve gastrointestinal function and relieve constipation. View Full-Text
Keywords: constipation; dietary intervention; Sujiaonori; women constipation; dietary intervention; Sujiaonori; women
►▼ Show Figures 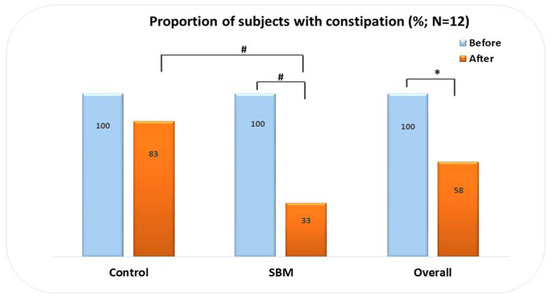