Old and New Approaches to Animal Cognition: There Is Not “One Cognition”

Using the comparative approach, researchers draw inferences about the evolution of cognition. Psychologists have postulated several hypotheses to explain why certain species are cognitively more flexible than others, and these hypotheses assume that certain cognitive skills are linked together to create a generally “smart” species. However, empirical findings suggest that several animal species are highly specialized, showing exceptional skills in single cognitive domains while performing poorly in others. Although some cognitive skills may indeed overlap, we cannot a priori assume that they do across species. We argue that the term “cognition” has often been used by applying an anthropocentric viewpoint rather than a biocentric one. As a result, researchers tend to overrate cognitive skills that are human-like and assume that certain skills cluster together in other animals as they do in our own species. In this paper, we emphasize that specific physical and social environments create selection pressures that lead to the evolution of certain cognitive adaptations. Skills such as following the pointing gesture, tool-use, perspective-taking, or the ability to cooperate evolve independently from each other as a concrete result of specific selection pressures, and thus have appeared in distantly related species. Thus, there is not “one cognition”. Our argument is founded upon traditional Darwinian thinking, which—although always at the forefront of biology—has sometimes been neglected in animal cognition research. In accordance with the biocentric approach, we advocate a broader empirical perspective as we are convinced that to better understand animal minds, comparative researchers should focus much more on questions and experiments that are ecologically valid. We should investigate nonhuman cognition for its own sake, not only in comparison to the human model. View Full-Text
Keywords: animal cognition; comparative psychology; comparative cognition; animal psychology; animal minds; cognitive evolution animal cognition; comparative psychology; comparative cognition; animal psychology; animal minds; cognitive evolution
►▼ Show Figures 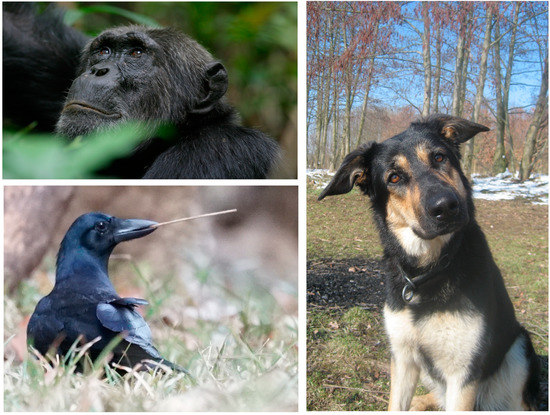