The traditional studies of complex systems have been mainly conducted through mathematical modelling via differential equations, application of dynamical systems and bifurcation theory to analyze the effects of the models’ parameters on the complex systems dynamics. With the development of mathematical models different from differential equations based, for example agent based simulation models, the traditional approaches of dynamical systems to understanding the effects of the models’ parameters on the complex systems dynamics often are not possible. Thus, to understand how parameters affect complex system dynamics and performance one must apply various statistical methods to the models’ simulation data. For example, one may try to apply various types of statistical modelling to the simulation data. From the statistical perspective, it is essential to investigate the simulation data through some modelling techniques, as they may provide better understanding of the behaviors of complex systems in engineering or other sciences. While the traditional linear or generalized linear models are working well for designed experiments of simple systems, they often do not perform well in the case of complex systems. Thus, more complex or non-linear models are required by the complex systems data, as such data may be non-linear and multi-scale, or may be obtained through some evolutionary computation.
In this work, we have conducted a statistical modelling study of simulation data of autonomous agents learning to cross CA-based highway model. We have investigated the modelling relationships between the input factors and output variables for our designed simulation experiments. We have proposed artificial neural network models as a regression technique for capturing the functionality between the input factors and response variables. Our study has demonstrated that the artificial neural network models outperform the classical statistical modelling approaches, including both multiple linear regression models and generalized linear models.
Due to the model assumptions associated with classical statistical models, both MLR and GLM have failed to explain the nature of our simulation data. In contrast, the ANN models have been more successful in establishing the mathematical relationships between input factors and output variables. Based on the results of the model validation, the ANN model with two hidden layers is the best model among other considered ones, in terms of model prediction accuracy and stability. Both linear and generalized linear models perform poorly in all cases considered, as they are linear models and one must make explicit model assumptions about the response variables. As a non-linear approach with the capability of performing adaptive model training, the ANN models provide more flexibility in building a model and they can be more successful in capturing the non-linear nature of the data. However, finding an optimal neural network for modelling simulation data may not be an easy task. Since the choice of the numbers of hidden layers or hidden neurons can be challenging, one must cross-validate all candidate models, to be able to determine the optimal one. A small number of hidden layers and hidden neurons can help to reduce the complexity of the models. Simple neural network models may be preferable from the complexity and computational point of view. However, they may fail to capture correctly some details of the relationships between input factors and output variables. By measuring the importance of the input factors using Olden function for different ANNs that are used to model the data corresponding to different decision types, we found that the most important factors affecting the decisions are CCP and KBT.
In the future, we plan to explore the optimal choices of the numbers of hidden layers and the numbers of hidden neurons, so that the model is optimal. It will also be interesting to compare the performance of ANNs with the deep learning approach to see if there is an improvement in explaining the model variation. 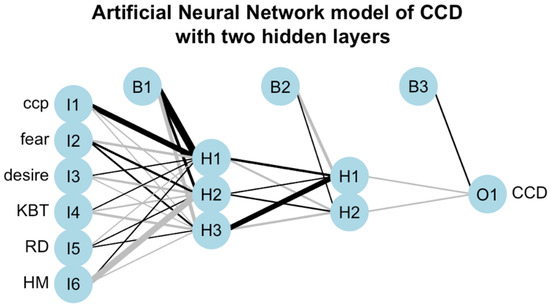 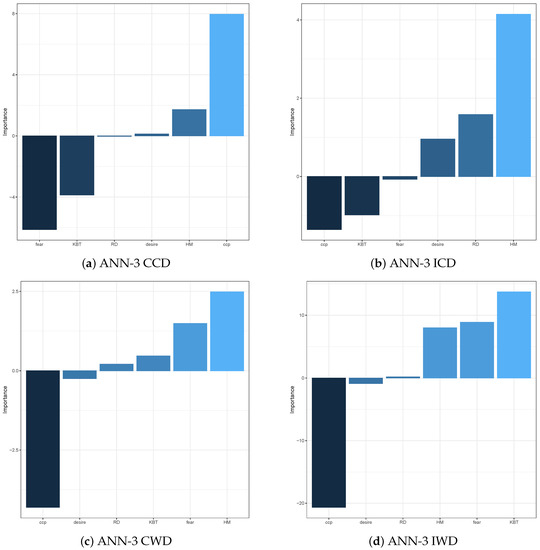