SBMLSimulator: A Java Tool for Model Simulation and Parameter Estimation in Systems Biology
Next Article in Special Issue

Endogenous retroviruses (ERVs) are a class of transposable elements found in all vertebrate genomes that contribute substantially to genomic functional and structural diversity. A host species acquires an ERV when an exogenous retrovirus infects a germ cell of an individual and becomes part of the genome inherited by viable progeny. ERVs that colonized ancestral lineages are fixed in contemporary species. However, in some extant species, ERV colonization is ongoing, which results in variation in ERV frequency in the population. To study the consequences of ERV colonization of a host genome, methods are needed to assign each ERV to a location in a species’ genome and determine which individuals have acquired each ERV by descent. Because well annotated reference genomes are not widely available for all species, de novo clustering approaches provide an alternative to reference mapping that are insensitive to differences between query and reference and that are amenable to mobile element studies in both model and non-model organisms. However, there is substantial uncertainty in both identifying ERV genomic position and assigning each unique ERV integration site to individuals in a population. We present an analysis suitable for detecting ERV integration sites in species without the need for a reference genome. Our approach is based on improved de novo clustering methods and statistical models that take the uncertainty of assignment into account and yield a probability matrix of shared ERV integration sites among individuals. We demonstrate that polymorphic integrations of a recently identified endogenous retrovirus in deer reflect contemporary relationships among individuals and populations. View Full-Text
Keywords: endogenous retrovirus; insertional polymorphism; mixture models; de novo clustering; mule deer; population history endogenous retrovirus; insertional polymorphism; mixture models; de novo clustering; mule deer; population history
►▼ Show Figures 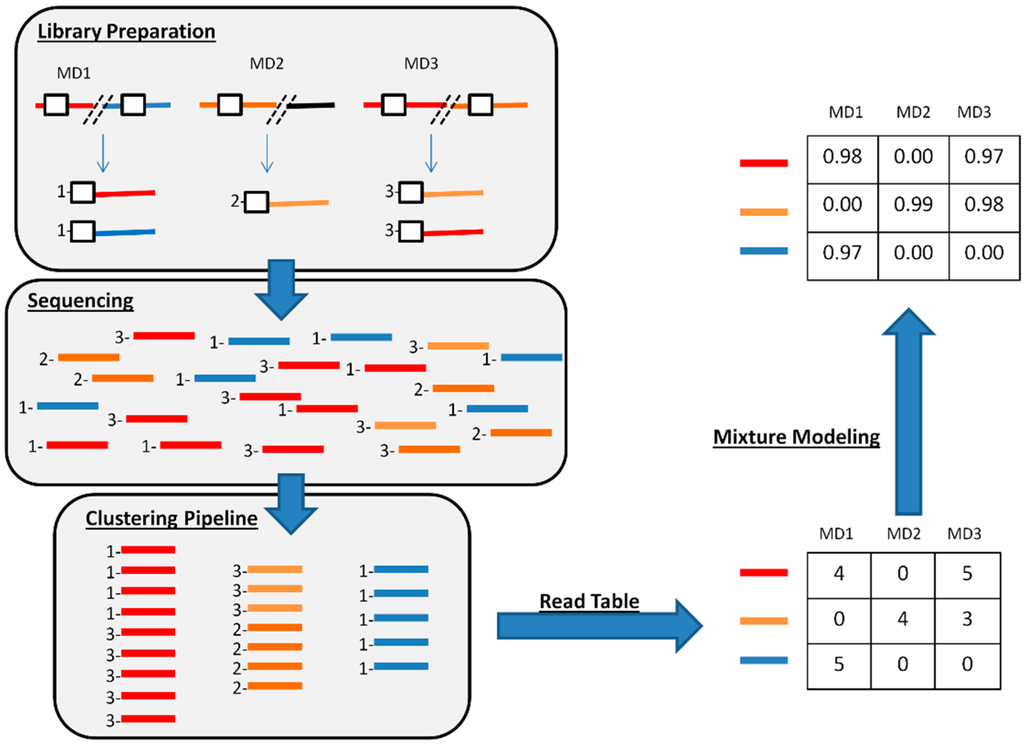