Collaborative Mapping and Digital Participation: A Tool for Local Empowerment in Developing Countries
Next Article in Special Issue

In this paper, I first review signal detection theory (SDT) approaches to perception, and then discuss why it is thought that SDT theory implies that increasing attention improves performance. Our experiments have shown, however, that this is not necessarily true. Subjects had either focused attention on two of four possible locations in the visual field, or diffused attention to all four locations. The stimuli (offset letters), locations, conditions, and tasks were all known in advance, responses were forced-choice, subjects were properly instructed and motivated, and instructions were always valid—conditions which should optimize signal detection. Relative to diffusing attention, focusing attention indeed benefitted discrimination of forward from backward pointing Es. However, focusing made it harder to identify a randomly chosen one of 20 letters. That focusing can either aid or disrupt performance, even when cues are valid and conditions are idealized, is surprising, but it can also be explained by SDT, as shown here. These results warn the experimental researcher not to confuse focusing attention with enhancing performance, and warn the modeler not to assume that SDT is unequivocal.
Keywords: signal detection theory; attention; performance signal detection theory; attention; performance

1.2. The Role of Selective Attention

The data discussed in this paper are a subset of those presented by Fine and Reeves [6]. The purpose of this paper is to explain the role of signal detection theory in helping understand these data. We [6] had restricted our experiments to those in which the signal is known in advance, its form and timing are unvarying, and its spatial location is validly cued, and we had asked whether focusing attention necessarily improves processing even in this restricted domain. We ran conditions in which attention was endogenous by using the ‘offset’ or placeholder method of Jonides and Yantis [21], as in the exogenous case, attention is by definition facilitatory. Placeholders (boxy numeral 8′s) were converted into letters or into optotypes (forward or backward pointing Es) by briefly removing some of the line segments that formed the placeholder in the target location, the remaining three placeholders being unaltered.
Our subjects (a total of 78 young adults, all with 20:20 vision or better) viewed a TV raster screen on which the four placeholders appeared at top, bottom, right, and left of fixation (see [22] for further details). The stimuli (letters, optotypes, and placeholders) were black, presented on a moderately bright white screen. Stimuli subtended 0.57 deg at the eye when shown at 5 deg eccentricity. After 1025 ms, one of the placeholders changed into a letter for 250 ms (or an optotype for 50 ms) by offsetting the necessary line segments, and then returned to placeholder form for a final 250 ms. The after-coming placeholders were expected to act as backward patterned masks, that is, to restrict processing time [23,24], but were not chosen to make the letters or Es subliminal (and they did not).
Subjects self-initiated trials by pressing the space bar. They reported the direction of the E, forward or backward, or the identity of the letter, by having the subject select (using a mouse) the letter, the E, or the backward E, on a display screen which followed each trial and remained on until the response was collected. Speed and accuracy were recorded for each trial. Conditions were fixed for each block of 24 trials, and subjects were well practiced in each condition beforehand. Critically, the task instructions, to focus attention on two locations (left and right, or top and bottom), or to diffuse attention to all four locations, were fixed for every block, were flagged to the subject before each block, and were understood by all. Stimulus class (letters or optotypes) was varied across sessions but never within. Thus, every aspect of the experiment was known in advance.
The main result for the 27 subjects of Experiment 1, as reported by us [22], was that when identifying a randomly chosen letter from a set of 20 possible letters, focusing on the top and bottom locations reduced accuracy by10%, and slowed RTs by 49 ms, as compared to diffusing attention to all four locations. These represent large costs for focusing top and bottom. Interestingly, focusing had almost no effect on left and right locations, possibly because left–right reading habits automatized letter identification on the horizontal meridian, or because (as shown for object-based attention) shifts across the horizon are much faster than those in the vertical direction [8] (Barnas and Greenberg [4]). These conclusions were supported by significant interactions in ANOVAs with replications applied both to arc-sine transformed percent corrects (F3,78 = 20.65, p < 0.01) and to reaction times (F3,78 = 7.78, p < 0.01).
We had been concerned that the perverse effect of focusing on top and bottom locations might have somehow resulted from a mid-line hemispheric interaction. However, Experiment 2 in Fine and Reeves [22] presented offset letters in a diagonal format, one in which the 4 placeholders were rotated by 45° to move away from the mid-line. Results showed that, compared to diffusing attention to all four placeholders, focusing on either of the opposite diagonals once again came at a cost, response latency being slowed by 24 ms (F1,14 = 12.5, p < 0.01) and accuracy deteriorating by 4% (F1,14 = 9.91, p < 0.01).
In contrast, in Experiment 3, focusing improved performance with offset optotypes (Es) (F1,19 = 9.2, p = 0.007), by more in the top and bottom locations (by 51 ms) than in the left–right ones (by 7 ms) (F3,57 = 2.71, p = 0.049). Accuracy was high (93%) and did not vary significantly with condition. The improvement in latency is consistent with the usual effects of focusing and in marked contrast to the results with offset letters. Focusing on letters also came at a cost when the response was binary (a two-key choice between 5 vowels or 5 consonants), rather than one out of 20 letters, so the difference between results with letters and those with Es was not due to the type of report (our Experiment 4 in [6].)

Data collection was supported by a grant from the William Randolph Hearst Foundation to Elizabeth Fine. 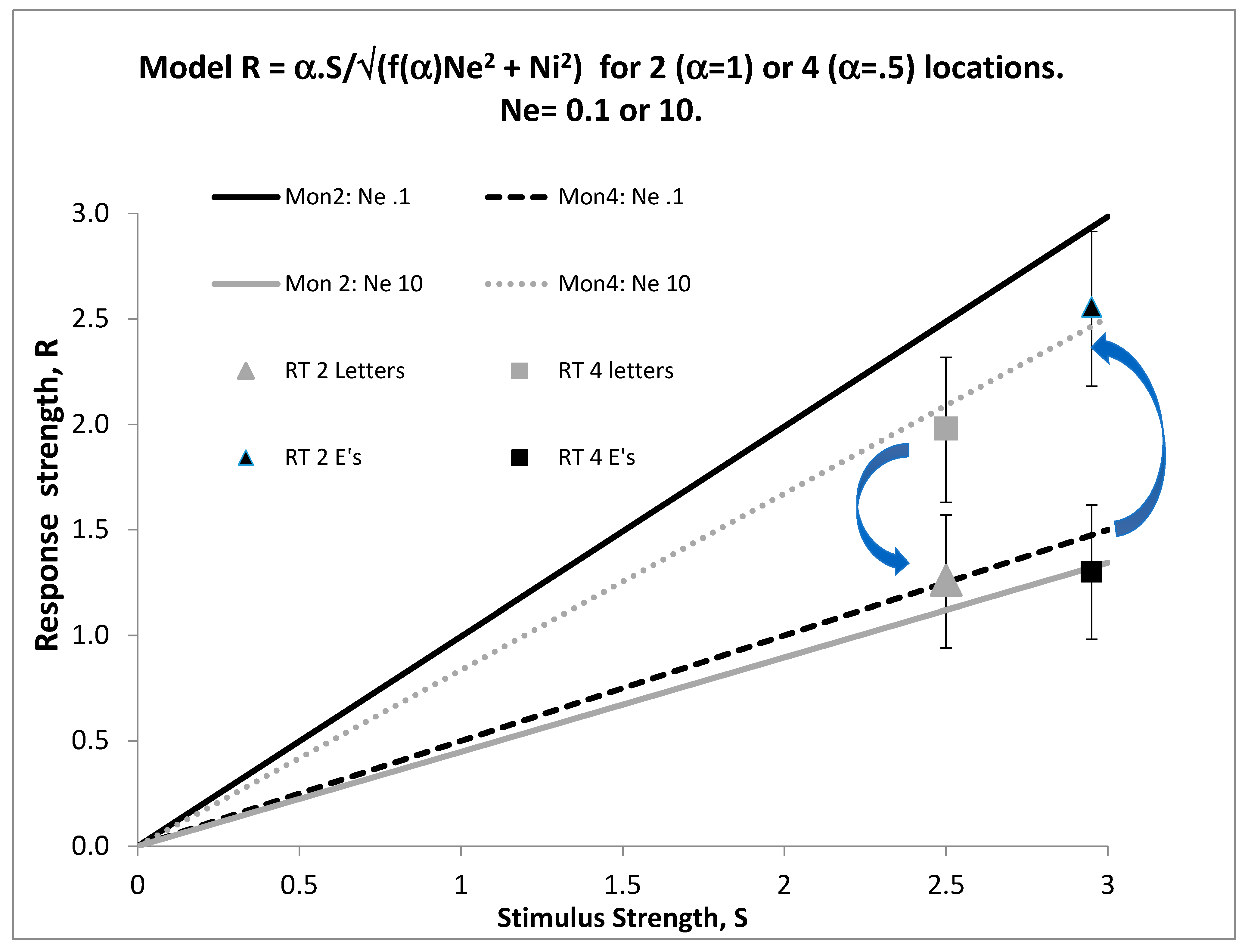