“Getting Along” in Parkchester: A New Era in Jewish–Irish Relations in New York City 1940–1970
Previous Article in Journal

From Antisemitism to Philosemitism? Trends in American Attitudes toward Jews from 1964 to 2016

This paper uses the feeling thermometer toward Jews on the American National Election (ANES) surveys from 1964 through 2016 to track trends in Americans’ attitudes toward Jews. The feeling thermometer is one of the longest continuous time series studies in which Americans are asked about their attitudes toward Jews, and there are items on the ANES surveys that can be used to partially correct for social desirability response effects. The analysis compares several demographic groups, an important focus of extant research. Findings indicate a modest warming trend for most groups, with older Americans and the least educated displaying the greatest warmth increases. In contrast, Catholics have become slightly cooler. Analysis suggests that the immigration of Catholics from Latin America, nations that lack the religious tolerance tradition, may account for this counter-trend. The conclusion offers suggestions for future research and discusses the implications of the rising proportion of Hispanic immigrants into the US for future levels of antisemitism in the US. View Full-Text
Keywords: antisemitism; feeling thermometer; demographic comparisons; measuring prejudicial attitudes antisemitism; feeling thermometer; demographic comparisons; measuring prejudicial attitudes
►▼ Show Figures 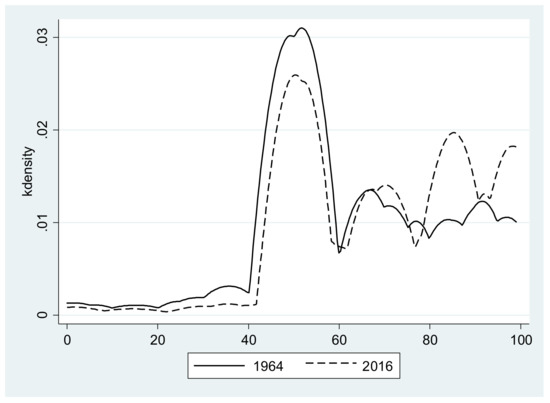