Searching for the Hidden: A Phenomenological Study Exploring the Spiritual Aspects of Day Case Surgery from Staff Perspectives

A Feasibility Study of Taste & See: A Church Based Programme to Develop a Healthy Relationship with Food

Holistic approaches which include a religious element are a promising intervention within obesity, but have not been explored in the UK. Objective: To conduct a feasibility study of a three-month, Christian-based intuitive-eating programme in a church. Methods: A total of 18 adults participated. Ethical approval was granted by Coventry University Ethics Committee. Participant and facilitator experience was investigated qualitatively. Results showed participants accepted the programme and engaged well with its spiritual component. Lay facilitators managed to adequately run the programme, although some difficulties identified training needs. Clinical, psychological and spiritual measures were analysed using intention to treat; baseline observation carried forward to input missing data. Mental well-being, anxiety, depression, quality of life, pain/discomfort uncontrolled-eating, emotional-eating, cognitive-restrained-eating, intuitive-eating and Body Mass Index (BMI) improved significantly post-intervention. There were improvements in spiritual well-being, and reductions in energy, fat and saturated fat intake. Between the end of the intervention and a six-month follow-up, there were no statistically significant changes. However, the extent that weight and BMI returned to baseline levels meant that the reduction from baseline was no longer significant or clinically important. Mean changes in other variables, including uncontrolled eating, emotional eating, mental well-being and anxiety remained statistically improved from baseline. At six-month follow-up, improvements in intuitive eating were fully sustained at this time point and total fat, saturated fat and sugar intake had reduced further even though these values did not reach statistical significance. Conclusion: It is feasible to recruit to, deliver and evaluate Taste & See in a UK church, with lay volunteers. Clinical outcomes were positive, but a larger, controlled study is needed. View Full-Text
Keywords: obesity; weight; religion; spirituality; church-based; faith-based; Christian; intervention; feasibility trial obesity; weight; religion; spirituality; church-based; faith-based; Christian; intervention; feasibility trial
►▼ Show Figures 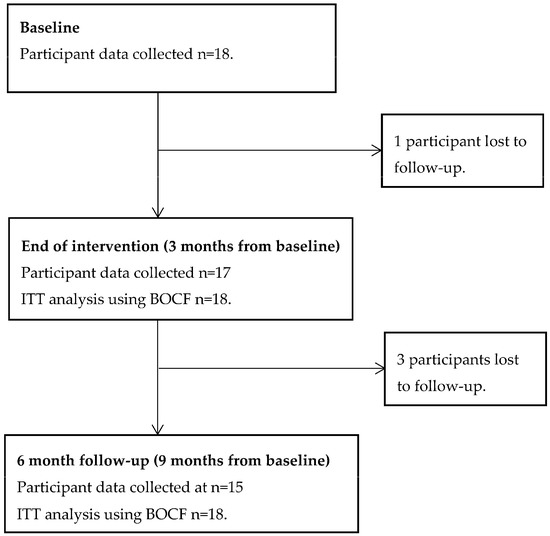