Muslims are often accused of being antisemitic and for being a major source of attacks and violence against Jews and Jewish institutions. Research also finds variation in Muslim orientations toward Jews at the aggregate, cross-national level, with lower levels of anti-Jewish sentiment in some western nations. There is also variation in the antisemitic sentiment of Muslims at the individual level in western nations. This paper asks whether factors that affect antisemitism among non-Muslims similarly affect Muslims with the same weight. In order to estimate these relative effects with precision, it is desirable to have a common dataset that includes both Muslims and non-Muslims. Since Muslims comprise a small percentage of the population in most western nations, nationally representative surveys rarely contain enough Muslim respondents for reliable statistical analysis. This paper uses the Democracy Fund + UCLA Nationscape survey, which has over 500,000 respondents, including 5000 Muslim respondents, sufficient for such analysis. The analysis finds that although American Muslims are less positive toward Jews than non-Muslims, the difference is not great, and, on average, American Muslims have positive views of Jews. Results also find that education, being foreign born, and perceiving discrimination against Muslims similarly affects Muslim and non-Muslim attitudes toward Jews. However, perceptions of a weak economy and age have discernably different effects on Muslim and non-Muslim attitudes toward Jews. View Full-Text
Keywords: antisemitism; public opinion; American Muslims antisemitism; public opinion; American Muslims
►▼ Show Figures 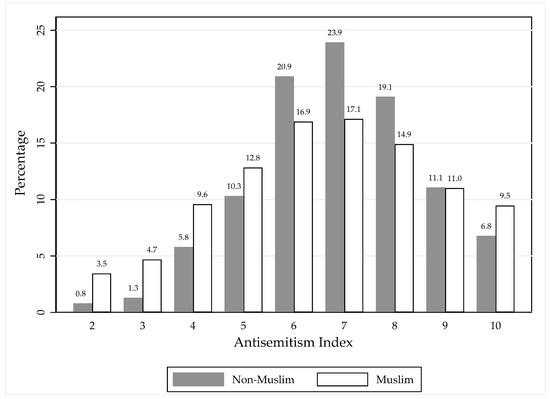