The Altar and the Rail: “Catholicity” and African American Inclusion in the 19th Century Episcopal Church
Previous Article in Journal

Śaivism after the Śaiva Age: Continuities in the Scriptural Corpus of the Vīramāheśvaras

In this article, I study in depth the first vita of the Franciscan Tertiary abbess Juana de la Cruz (Vida y fin de la bienaventurada virgen sancta Juana de la Cruz, written c. 1534), examining it as a chronicle that narrativizes the origins and reform of a specific religious community in the Castile of the Catholic Monarchs. I argue that Vida y fin constitutes an account that was collectively written inside the walls of the enclosure that can help us understand themes, motifs, and symbolic Franciscan elements that were essential for the self-definition of its original textual community. I first discuss the narrative of the convent’s foundation and then examine the penitential identity of the community, highlighting the inspiration that Juana’s hagiography takes from the infancy of Caterina da Siena, as described in the Legenda maior by Raimondo da Capua, and analyzing to what extent the represented penitential practices related to the imitatio Christi reflect a Franciscan Tertiary identity in opposition to a Dominican one. Finally, I address the passages in which the hagiographer(s) discuss(es) the sense of belonging to the Franciscan order rather than the Dominicans, and the mystical figure of Francesco d’Assisi as a founder, guide, and exemplar. View Full-Text
Keywords: Juana de la Cruz; Franciscan Tertiaries; reform; women mystics Juana de la Cruz; Franciscan Tertiaries; reform; women mystics
►▼ Show Figures 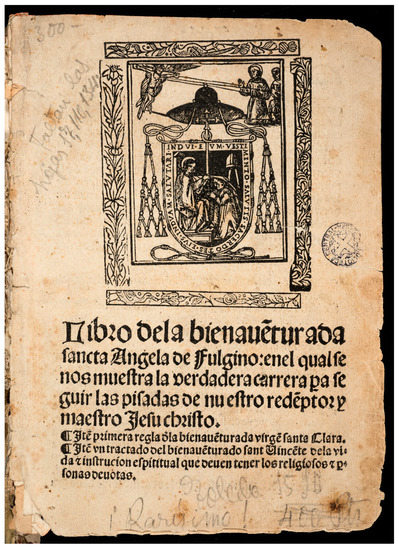