‘Uncovering the Self’: Religious Doubts, Spirituality and Unveiling in Egypt
Next Article in Special Issue

World Youth Day 2016 in the Archdiocese of Lodz: An Example of the Eventization of Faith

Japanese Shinto shrines are popular pilgrimage sites not only for religious reasons, but also because of their connections to popular culture. This study discusses how tourism is involved in the construction of the shrine space by focusing on the material environment of the shrine, visitor performances, and how the shrine is contested by different actors. The subject of the study, Seimei Shrine, is a shrine dedicated to the legendary figure Abe no Seimei (921–1005), who is frequently featured in popular culture. Originally a local shrine, Seimei Shrine became a tourist attraction for fans of the novel series Onmyōji (1986–) and the movie adaptation (2001). Since then, the shrine has branded itself by placing themed statues, which realize the legend of Abe no Seimei in material form, while also attracting religious and touristic practices. On the other hand, visitors also bring new meanings to the shrine and its objects. They understand the shrine through different kinds of interactions with the objects, through performances such as touching and remembering. However, the material objects, their interpretation and performances are also an arena of conflict and contestation, as different actors become involved through tourism. This case study shows how religion and tourism are intertwined in the late-modern consumer society, which affects both the ways in which the shrine presents and reinvents itself, as well as how visitors understand and perform within the shrine. View Full-Text
Keywords: shinto shrine; popular culture; tourist performances; material religion shinto shrine; popular culture; tourist performances; material religion
►▼ Show Figures 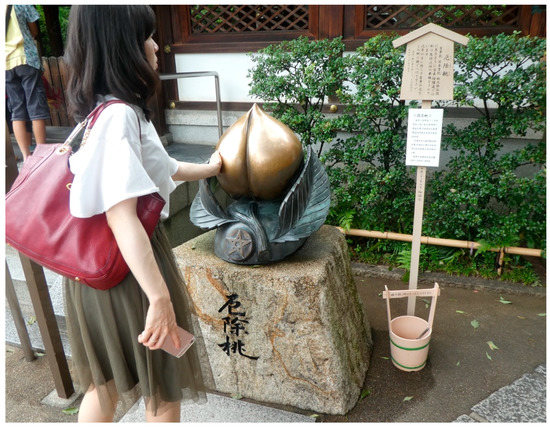