Centrality of Religiosity as a Resource for Therapy Outcome?
Previous Article in Journal

Research on Islamophobia in Switzerland, and on the role of religiosity in relation to Islamophobia, is in its infancy. Against this background, we analyzed data from an online survey conducted in Switzerland on “Xenosophia and Xenophobia in and between Abrahamic religions”. The results of a multivariate analysis revealed that, besides right-wing authoritarianism, social dominance orientation, and political orientation, indicators related to religion play a crucial role. We found that the greater the role of religion, and the more central it is for the individual, the more likely it is that the individual has a positive view of Islam. We claim that a person’s level of religiosity is accompanied by her adoption of religious values, such as neighbourliness and tolerance, and that the more religious individuals are, the more likely they are occupied with different religions, which leads to tolerance as long as it is not accompanied by a fundamentalist religious orientation. Also relevant is that the preference for the state to have a secularized relationship with religion is accompanied by a fear of Islam. We propose that studies on Islamophobia, as well as on other prejudices, should use differentiated measures for religiosity; the Centrality of Religiosity Scale (CRS) turned out to be a reliable instrument of measurement in this regard. View Full-Text
Keywords: centrality of religiosity; Islamophobia; prejudices; Switzerland centrality of religiosity; Islamophobia; prejudices; Switzerland
►▼ Show Figures 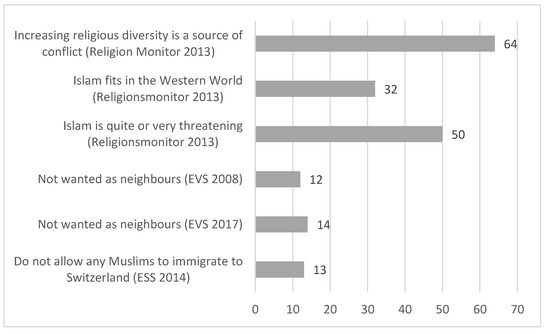 Yendell, A.; Huber, S. The Relevance of the Centrality and Content of Religiosity for Explaining Islamophobia in Switzerland. Religions 2020, 11, 129.


Yendell A, Huber S. The Relevance of the Centrality and Content of Religiosity for Explaining Islamophobia in Switzerland. Religions. 2020; 11(3):129.


Yendell, Alexander; Huber, Stefan. 2020. "The Relevance of the Centrality and Content of Religiosity for Explaining Islamophobia in Switzerland." Religions 11, no. 3: 129.