New Monasticism: An Answer to the Contemporary Challenges of Catholic Monasticism?
Next Article in Special Issue

Tyler Perry and the Rhetoric of Madea: Contrasting Performances of Perry’s Leading Lady as She Appears on Stage and Screen
Previous Article in Journal

FIX IT BLACK JESUS: The Iconography of Christ in Good Times

Good Times is primarily remembered for the situation comedy that it became, rather than how the series began. As a part of what Means Coleman classifies as “The Lear Era: Social Relevancy and Ridiculed Black Subjectivity,” the series was the first sitcom in TV history to feature a loving, working-class, Black nuclear family—the Evanses—with a focus on recounting their racial and socioeconomic challenges and gains. While the representational treatment of the Evanses as a whole and full family by network television (CBS) was groundbreaking, Good Times, perhaps, still reinforced implicit schemas regarding Blackness as the Evanses were poor and lived in Chicago’s rough-and-tumble Cabrini Green Housing Projects. Further, as the series progressed, narrative attention focused on the character J.J., a ‘Jim Crow’ stereotype (i.e., eye-bulging, wide-smiling, hustler) whose emergence as the centerpiece of the series eventually prompted co-star, John Amos, to leave the once stereotype-busting show out of protest. Although Good Times ultimately fell into the stereotype trap, the first two seasons of the series worked effectively in representing Blackness as complex and worthy. This article focuses on “Thank You Black Jesus”, a season-one episode that centers on J.J.’s painting of Black Jesus, an artistic interpretation that is in line with the Bible’s description of Jesus. “Thank You Black Jesus” begs several important questions surrounding religious and secular symbols, the interpellation and hailing of Blackness, and faith or suspending one’s disbelief. In this article, we conduct a critical, cultural analysis to explore the meanings that are associated with symbols, Blackness, and faith. We also consider the staying power of the “Black Jesus” episode in contemporary popular culture, as witnessed in the form of memes, intertextual references to the episode in other media texts, and as elucidated by continued debates surrounding the race of Jesus and the ways to pursue an iconography of inclusiveness. View Full-Text
Keywords: African Americans; television; sitcoms; popular culture; Black Jesus African Americans; television; sitcoms; popular culture; Black Jesus
►▼ Show Figures 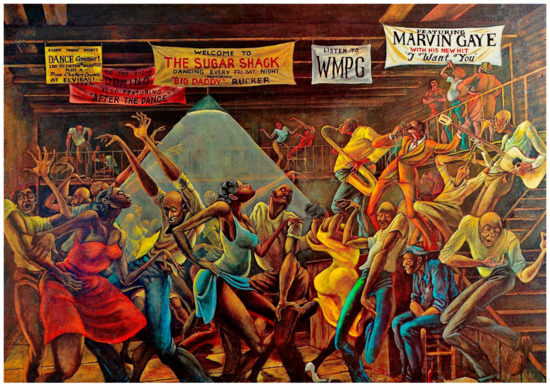