Security, Religion, and Political Culture: A Defense of Weak Disestablishment
Next Article in Special Issue

Carceral Hermeneutics: Discovering the Bible in Prison and Prison in the Bible
Previous Article in Journal

Charged Moments: Landscape and the Experience of the Sacred among Catholic Monks in North America
Previous Article in Special Issue

This paper draws on literary scholar Susan Ryan’s work to show how Americans worked out national as well as racial identities through benevolent activity, including forms of reformative incarceration. Reformers operated as true citizens by sustaining themselves and providing for others. Recipients, on the other hand, functioned as people in need. Ryan argues that benevolent activists ascribed need to entire groups of people. As a result, “the categories of blackness, Indianness, and Irishness…came to signify need itself.” Elite Americans thereby “raced” need, assigning essential difference to populations they sought to relieve. Ryan’s work on racialized need can help us understand the connections between Christianity, race, and mass incarceration. I explore how one nineteenth-century military prison—and the disciplinary institutions later modeled on it—was created in direct response to presumed (and raced) need among Native Americans. I also consider how Christian reformers obscured and concealed the racialized nature of this institution—and how, in that avoidance, they came to sanctify mass incarceration for racial minorities. Finally, I look at two incarcerated Native artists’ drawings to show how people caught up in racialized renderings of their need have something else to say about who they are and what prison is.
Keywords: prisons; Native Americans; reform movements; incarceration; Benevolent Empire; race; nineteenth century prisons; Native Americans; reform movements; incarceration; Benevolent Empire; race; nineteenth century

2. The Sanctification of Native Incarceration

America’s first experiments with incarceration—starting in the 1790s and growing into the 1830s and 1840s—corresponded with what has been called the Age of Benevolence. The leading citizens who built and ministered within New York, Pennsylvania, Massachusetts prisons engaged in a host of other reforming activities, creating what scholars have often called the Benevolent Empire (Cayton 2010). They started Sunday schools, served as agents for the American Bible Society, promoted colonization for African Americans, and organized campaigns for the relief of the poor. They were tirelessly involved in the nation’s first prisons, sites they lobbied for, designed, and sometimes administered with the goal of reforming inmates through a highly mediated period of incarceration (Graber 2011).
The Christian reformers that populated the Benevolent Empire were busy people. They performed a remarkable amount of public service to address the great need they saw around them. Literary scholar Susan Ryan has called us to pay careful attention to the “need” benevolent reformers recognized in others and addressed through their activism. She argues that benevolence proved to be a site in which elite Americans worked out national, as well as racial identities (Ryan 2003, pp. 1–5). Donors were true citizens in their ability to sustain themselves and also provide for others. Recipients, on the other hand, revealed their inability to make it in this geographically and economically expanding new nation. They were people in need (Ryan 2003, pp. 5–8).
Ryan has shown how benevolent reformers came to see need not just in the individuals they assisted, but in entire groups of people. According to them, she writes, “the categories of blackness, Indianness, and Irishness…came to signify need itself” (Ryan 2003, p. 1) In this way, elite Americans “raced” need, ascribing essential difference to the populations whose situations they sought to relieve. The result was an enduring distance. Black need and Indian need made these populations different from self-sufficient white Americans. But this ascribed need also resulted in enduring ties. White Americans felt duty-bound to address the need exhibited in racial others (Ryan 2003, p. 5).
While Ryan did not address prisons or punishment directly, her analysis of how need came to be raced can help us understand the connection between Christianity, race, and mass incarceration. It makes sense of why benevolent reformers praised not only Pratt’s prison at Fort Marion, but also the Carlisle school and other off-reservation boarding institutions for Native children. Ryan showed how antebellum reformers came to view certain racial and ethnic groups as typifying need. This construction of need tied reformers to these particular populations, but also authorized unequal power relationships and coercive interventions. Pratt openly named the raced form of need that he and others associated with American Indians. Left to their own devices on the plains, Native peoples would carry on their doomed way of life. Pratt was forthright about what sort of response this need required. It required force and coercion. It demanded constraints on freedom.
Protestant reformers, on the other hand, accepted the circumstances and power relationships that Pratt described, but never acknowledged them openly. Consider the Quaker committee members who insisted that no suffering occurred at Fort Marion. Rather than dwelling on how ideas of need shaped power relationships, they instead emphasized need as the basis for their sentimental bonds with Native people. They extolled the “noble Christian ladies” who taught classes to the Indian men. They referred to Pratt as a shepherd with a flock. They understood the “power” Pratt exhibited as a “strong man” as an example of the “mighty transforming power of God.” In doing so, Pratt’s prison became an ordinary classroom. A warden became a doting father. Officials who threatened with weapons and punished with drugs and solitary confinement became associated with the very work of God. Pratt claimed that Native people needed prison. Reformers accepted his claim, avoided discussion of the prison’s dehumanizing aspects, and then asserted that Fort Marion was God’s way of working with needy American Indians.
Understanding how need came to be raced, how force was required to address that need, and how Christian benevolent reformers tiptoed around the realities of coercion, helps us understand contemporary American prisons. As Winnifred Sullivan and Tanya Erzen have shown, the dominant model for Christian interaction with incarcerated people is conservative Protestant FBMs or faith-based ministries (Sullivan 2009; Erzen 2017). These scholarly works, along with my own experiences in prison ministries, convince me that FBMs speak the same language about incarcerated people and what they need. They tell stories about prisoners (who are disproportionally black and brown) that emphasize incarcerated peoples’ sorry state prior to incarceration and involvement in faith-based ministries. They focus on the things FBMs make available: counseling, education, support, and connection. They praise prison staff who accommodate FBM programs. They testify to lives transformed and attribute the change to God’s power realized through these programs. According to narratives circulated by FBMs, prisons are sites for needy (and racialized) groups of people to experience God’s amazing work. FBMs are the new Richard Pratt. Present-day prisons are the new Fort Marion.

3. Drawing Other Worlds at Fort Marion

Neither Pratt nor the benevolent reformers who supported him included Native prisoners’ own expressions in their publications, but not because they were unaware of them. Indeed, white officials and visitors to Fort Marion noticed and encouraged Native prisoners’ steady output of drawings. Works by Chê̱thā̀idè (White Horse) and Zó̱tâm (Driftwood) offer useful examples. At Fort Marion, they confronted a regime designed to address what leading Americans considered to be their particular needs. They underwent Pratt’s “preliminary training”. They responded in several ways, including Chê̱thā̀idè’s escape plot. They also drew. Their artistic production addressed the racialized renderings of their need, their “preliminary training” through incarceration, and offered up an alternative vision of what it meant to be Kiowa.
As noted earlier, Chê̱thā̀idè and Zó̱tâm were born into the Kiowa nation at a time of flourishing. They were raised among men who displayed their accomplishments in myriad visual forms. They depicted battles and visions on tipi covers (Ewers 1978). They adorned their bodies with colors, objects, and weapons given to them in dreams and other supernatural encounters (Greene 1997; McCoy 2003). When they got to Fort Marion, they used the materials around them to recall their lives in a state of freedom. Kiowas and other Native prisoners from the southern Plains drew hundreds of pictures during their three-year incarceration (Berlo 1996; Petersen 1971; Szabo 1993; Wong 1989).
Chê̱thā̀idè, for instance, drew pictures of himself as a warrior and raider. (Figure 1) Above the male figure is what art historians call a name glyph. The glyph is a white horse, denoting Chê̱thā̀idè’s name and identifying him as the subject of the picture. In his drawings, Chê̱thā̀idè depicted himself in moments of strength, as in this drawing in which he captures many ponies. In another, he draws himself as the owner of a powerful shield. (Figure 2) Attached at his hip, the shield includes a geometric design, likely received in a vision or inherited from another powerful leader. In Kiowa culture, decorated shields were understood to be imbued with sacred power. In the next example, he leads other men out on an expedition, most likely a raid for animal resources or to battle. (Figure 3) And lastly, he stands with other prominent leaders to give a speech. (Figure 4) If Pratt and benevolent reformers understood him to be a potent symbol of racialized need, Chê̱thā̀idè depicted himself as a man of dignity and power.
Zó̱tâm also represented powerful Kiowa men in images of hunting, diplomacy, and war. After learning to write at Fort Marion, Zó̱tâm used an Anglicized version of his name to identify himself in his drawings. He drew himself engaged in meeting an American army official during important negotiations in 1871. (Figure 5) His images also depicted his family life prior to incarceration, including this drawing of himself and his wife. (Figure 6) Like Chê̱thā̀idè, Zó̱tâm produced pictures in which he presented himself as a strong man and leader of his family and nation.3
Unlike Chê̱thā̀idè, Zó̱tâm also depicted life at Fort Marion. The contrasts with life in freedom could not be greater. He drew Indian prisoners adorned in American uniforms being forced to practice military drills. (Figure 7) In other drawings, he noted prison guards carrying weapons and monitoring the Native men’s movements. He also depicted the local women who taught language classes to the prisoners. (Figure 8) Again, the uniforms stand in stark contrast to the individualized adornment featured in drawings about pre-prison life. Zó̱tâm also drew chapel services in which inmates crammed together and listened to their warden, Captain Pratt, preach sermons on Sundays. (Figure 9).
Chê̱thā̀idè and Zó̱tâm, along with other southern Plains Indian men incarcerated at Fort Marion, created images depicting the reality Pratt described. The imprisoned artists detailed their cultural transformation through “preliminary training.” They showed how coercion and threat functioned as part of the process. They revealed the forced labor, high walls, and loaded guns that facilitated Pratt’s vision. The artists and their work show us how Bishop Whipple and his fellow reformers were wrong. This was not just a Christian school. These were not just meetings for prayer. By racializing need and obscuring the workings of power, benevolent reformers made prison for some people inevitable and desirable. They gave racialized incarceration the Lord’s sanction. 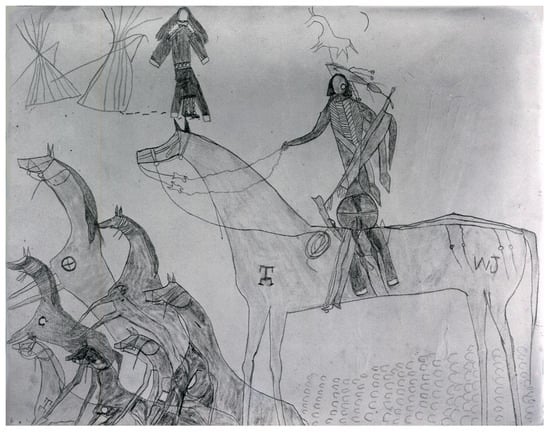 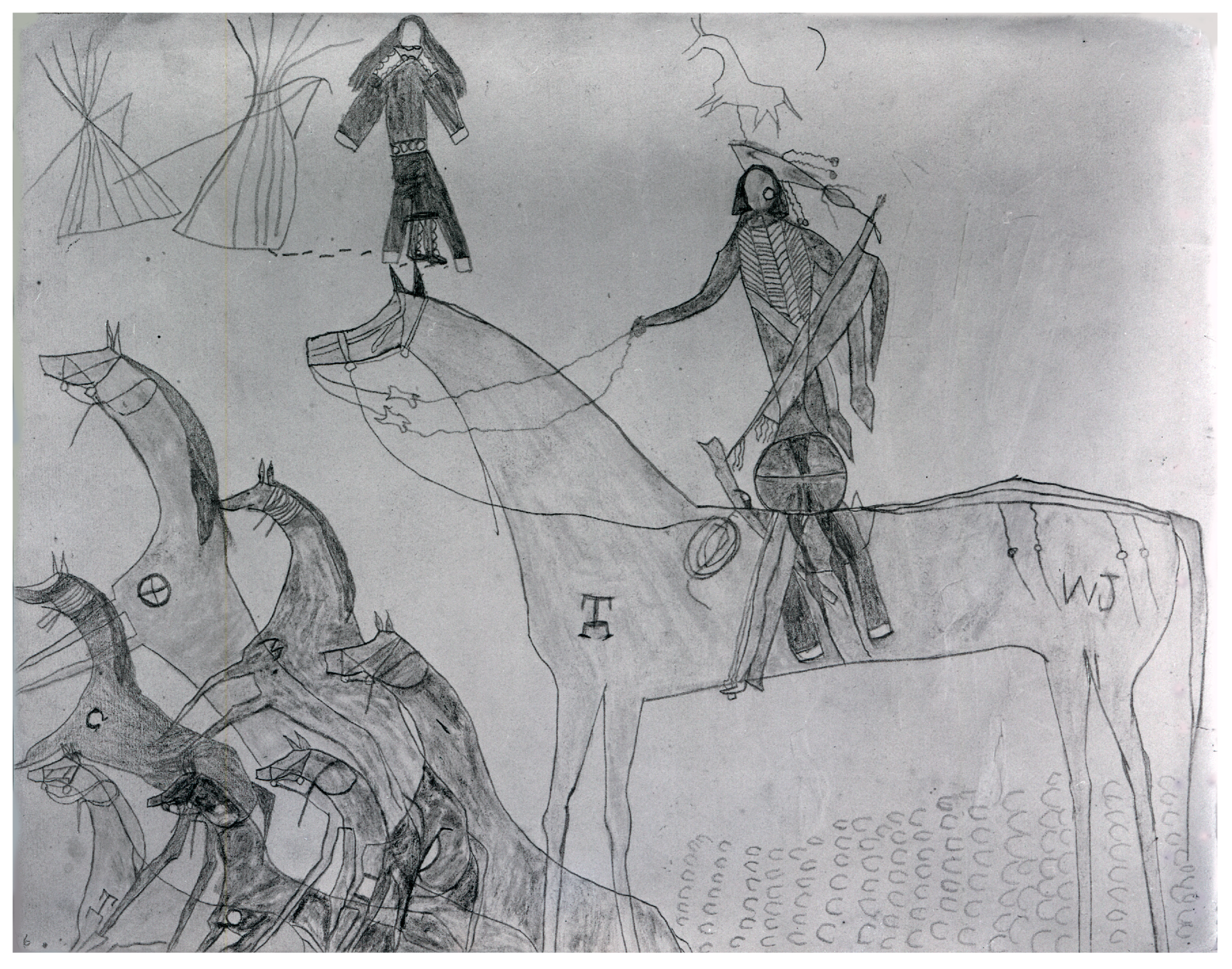 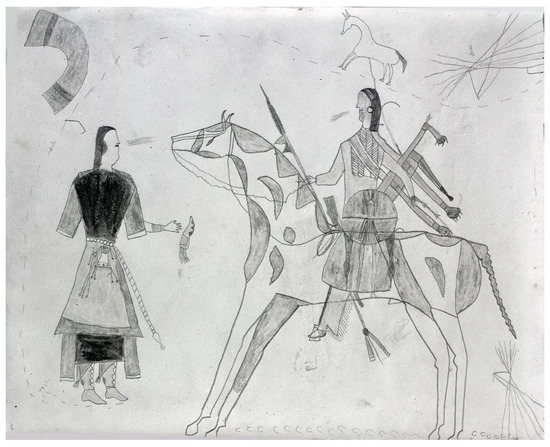 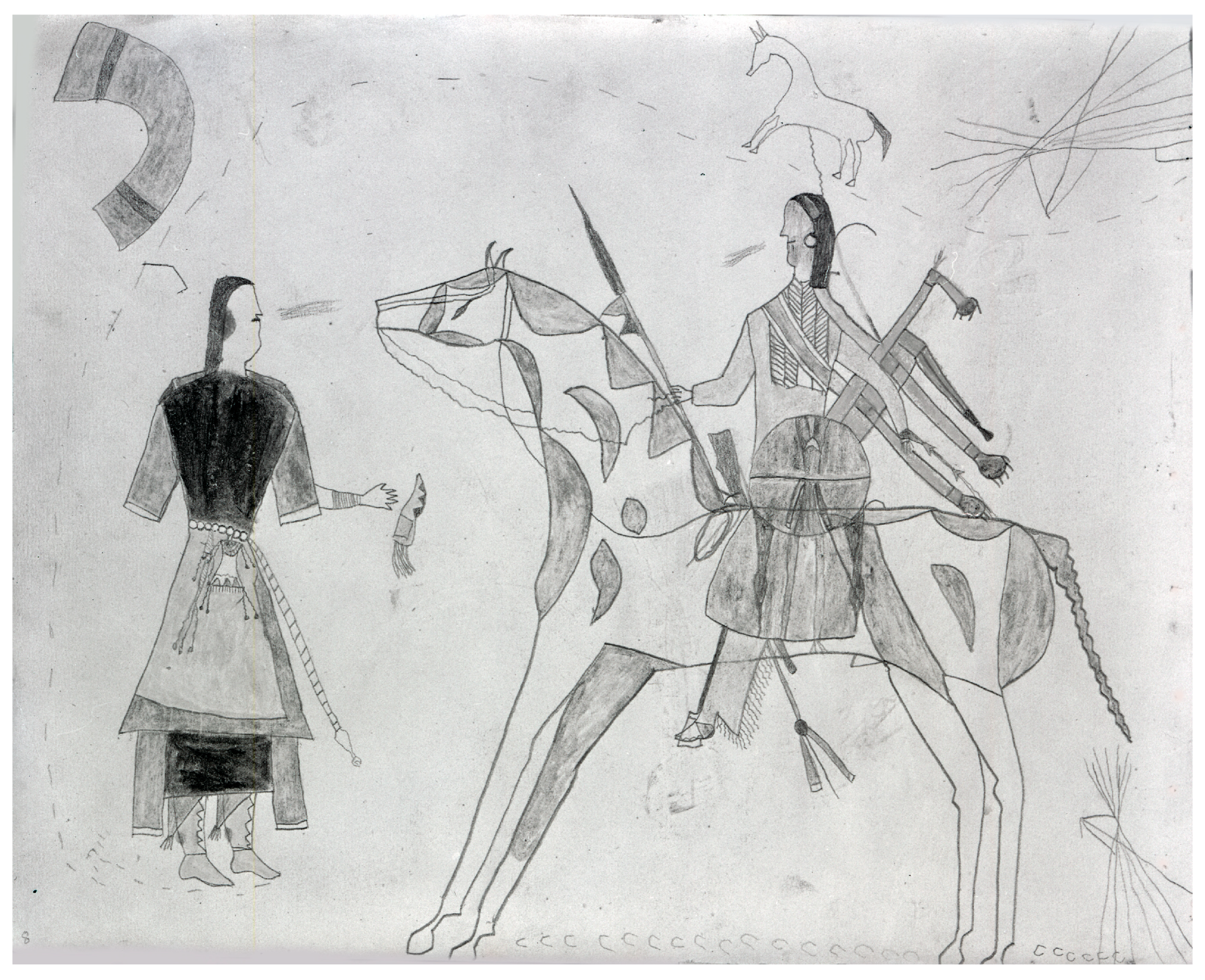 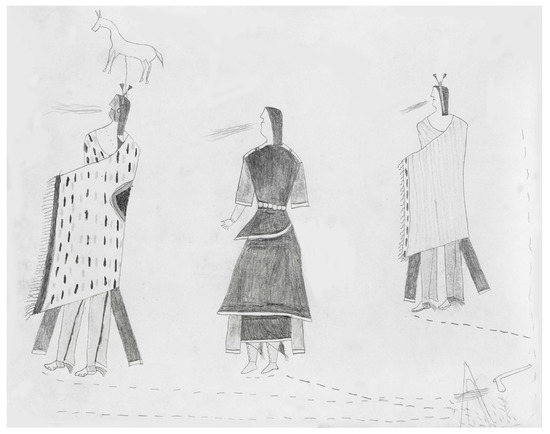 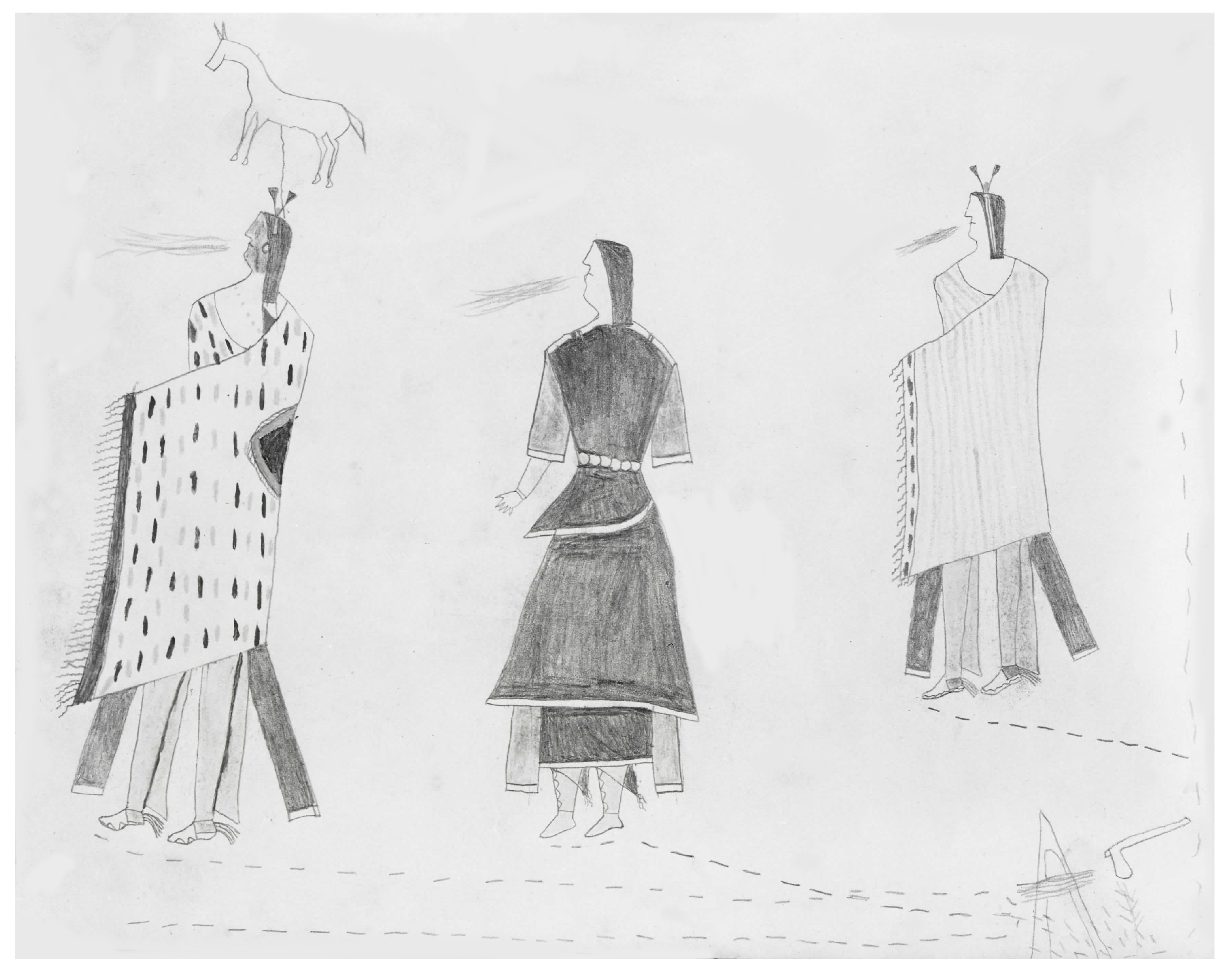 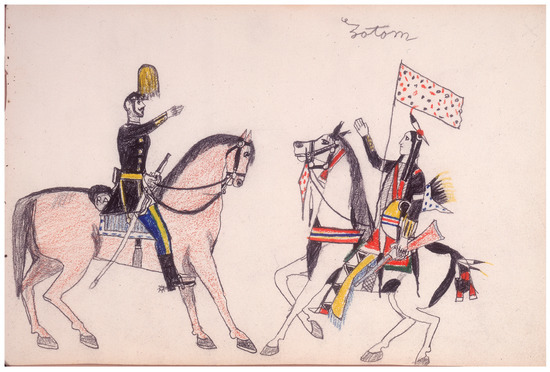 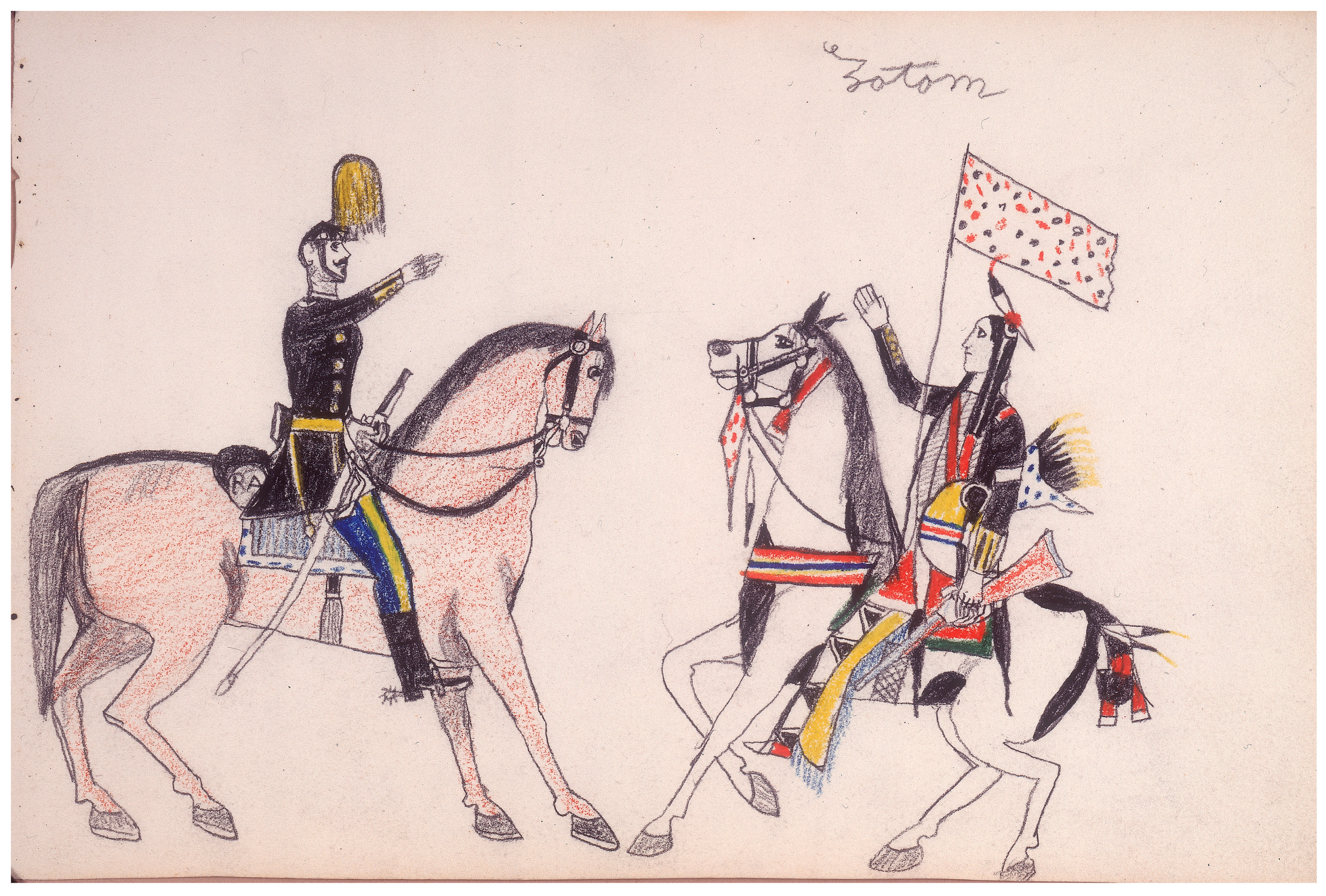 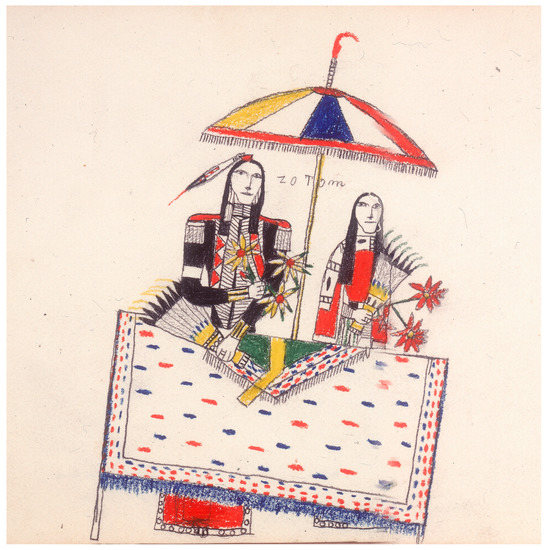 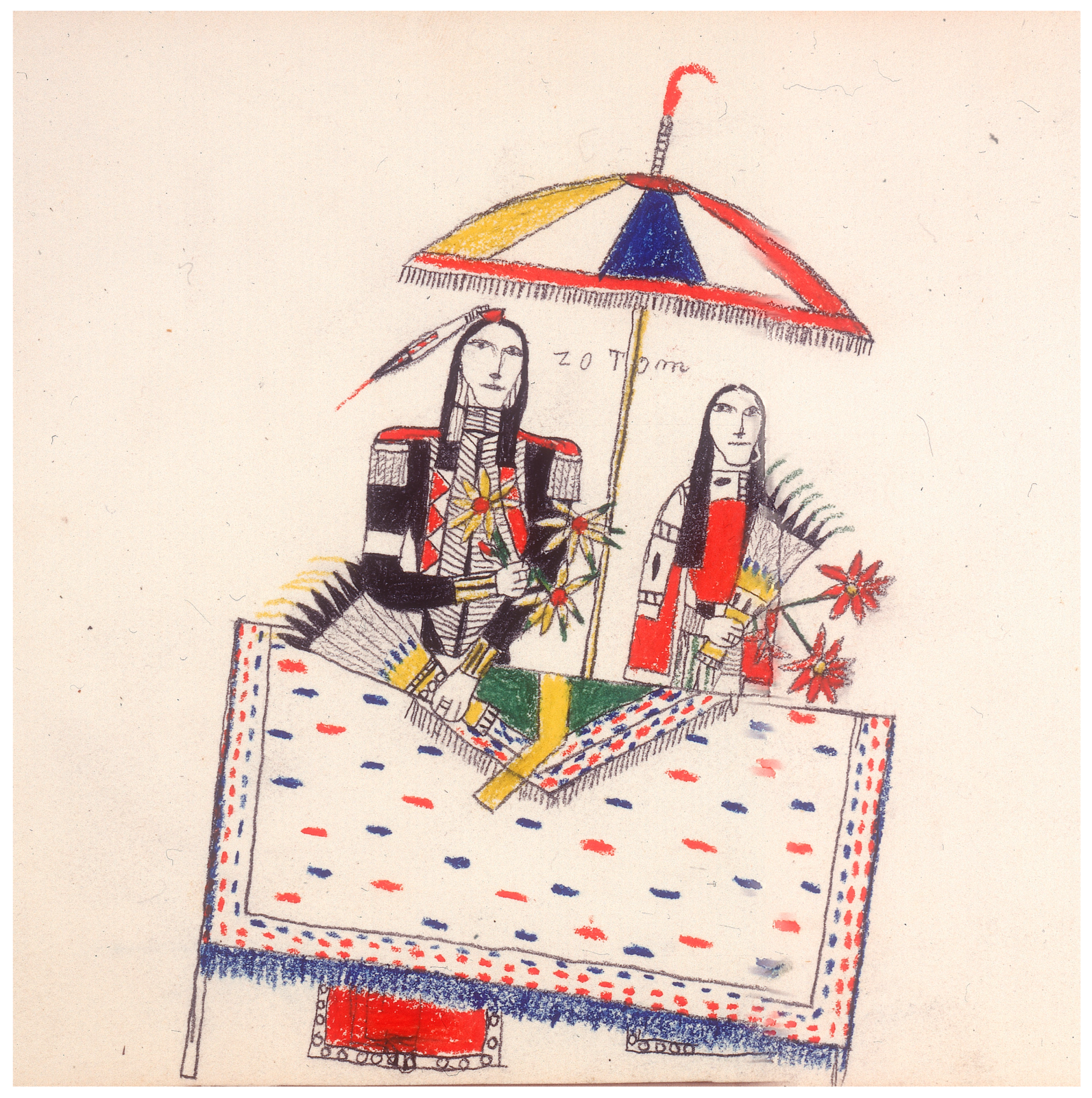 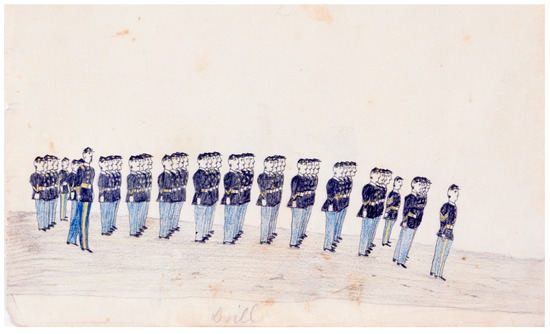 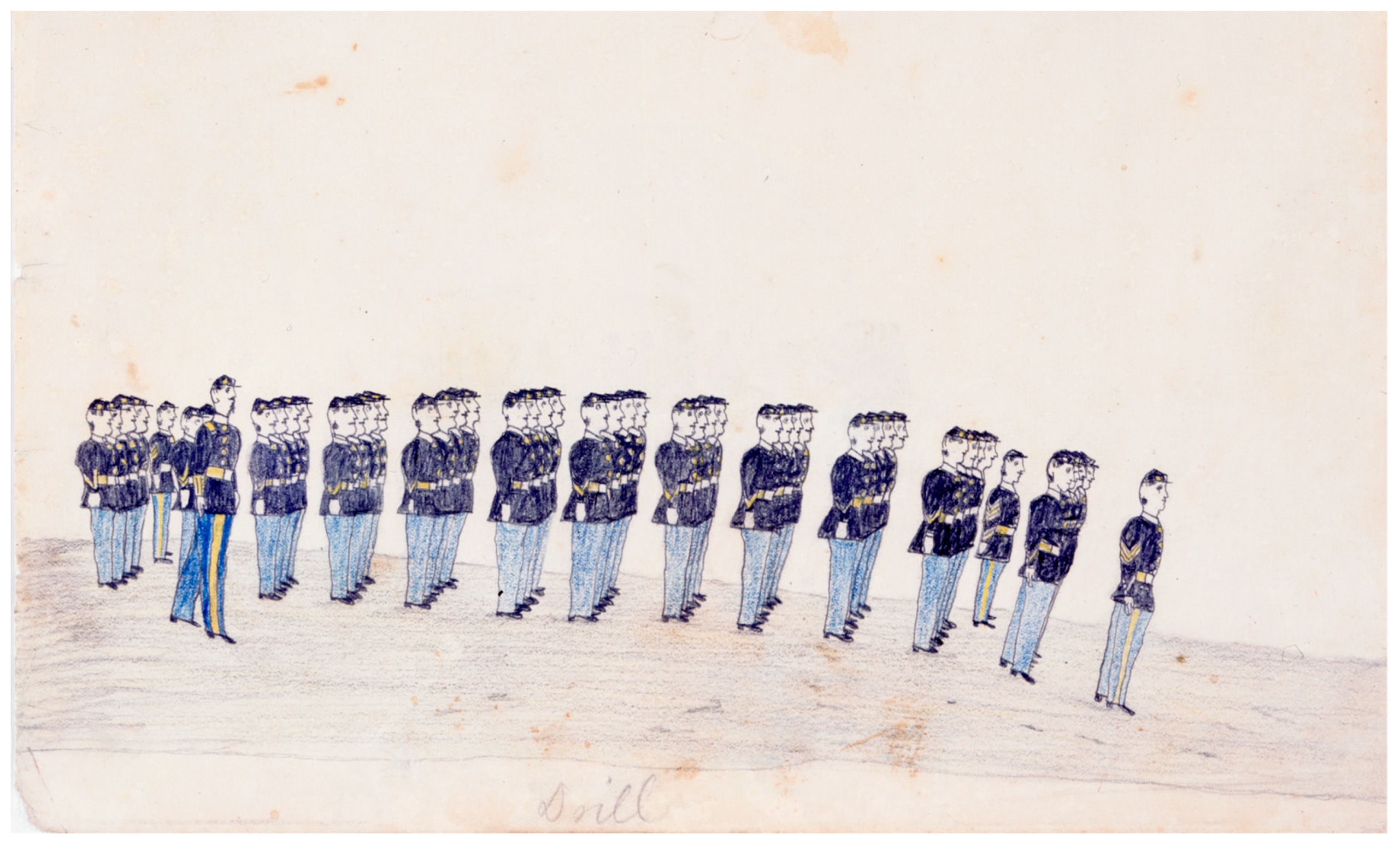 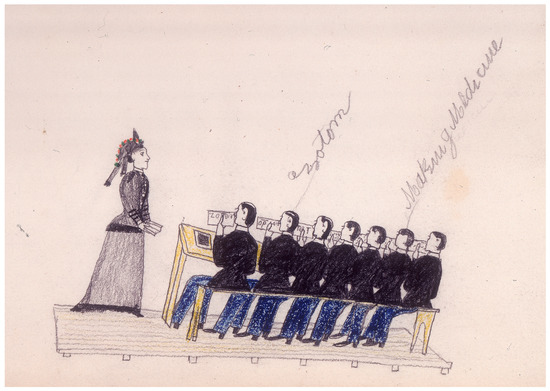 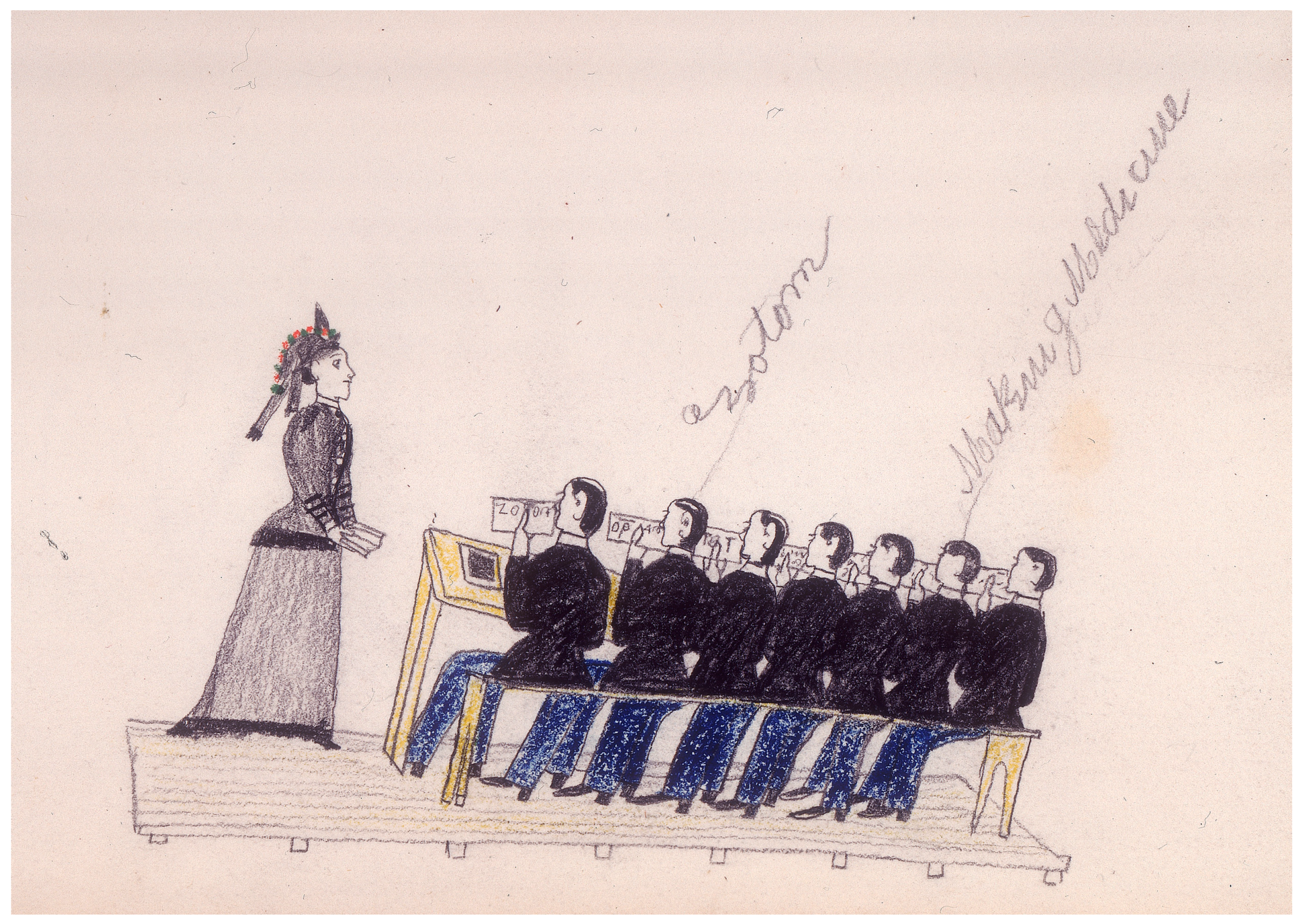