“The Real Victim of Lynch Law Is the Government”: American Protestant Anti-Lynching Advocacy and the Making of Law and Order
Previous Article in Journal

The Muslim community in America has been facing turmoil, particularly after the events of 9/11. Muslims are facing a number of anti-Islamic and anti-Muslim discriminatory practices, biases, and sentiments from many Americans. These religious prejudices are apparent at the public and political leadership levels, as well as other facets of the country. The current study has concentrated on Trump’s emerging ideology that positions him within anti-Islamic and anti- Muslim discourses since he announced his candidature for the presidency. The study aims to examine and pin point the self-other representations that are evident in the Islamophobia and anti-Muslim sentiments in Trump’s statements during the American Presidential Elections of 2016. In order to examine Trump’s prejudicial discourse, the research engaged with Critical Discourse Studies as its framework, with a specific focus upon Van Dijk’s Ideological Square Model as well as NVIVO 12 Pro for linguistic inquiry. The results showed that the self-other binary is strongly evidenced in Trump’s statements and that he employed various discursive techniques to represent Islam and Muslims in a negative manner, while representing himself as very patriotic to the country. To legitimatize his arguments, he deployed several rhetoric strategies, including victimization, presupposition, authority, number game, evidentiality, polarization, and populism. Keeping the religious and economic context in view, the research reveals that Donald Trump has represented Islam and Muslims as a negative phenomenon and presented himself as an Islamophobe by negatively targeting Islamic components, like Shariah and Jihad. In his prejudicial representation of Islam, most of the Islamic beliefs are represented as anti-women and anti-American, threatening the security of America and its very way of life. View Full-Text
Keywords: critical discourse analysis; ideological square model; US Presidential Elections 2016; Donald J. Trump; Islamophobia; Muslims critical discourse analysis; ideological square model; US Presidential Elections 2016; Donald J. Trump; Islamophobia; Muslims
►▼ Show Figures 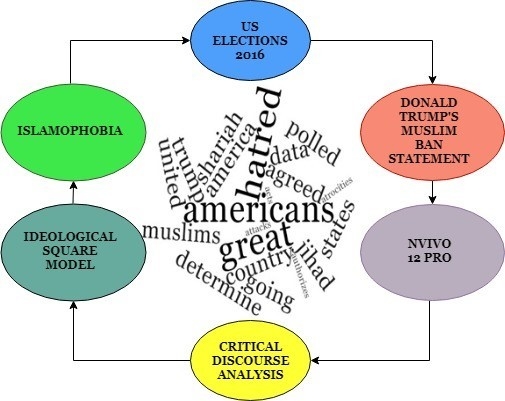