Gerassimos A. Papadopoulos
2 and 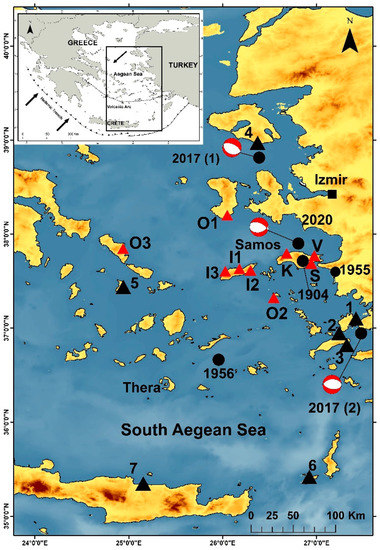 Ioanna Triantafyllou
Mrs Ioanna Triantafyllou has a BSc in Geography (Harokopion University, Athens, 2013), an MSc in Applied Geoinformatics (University of Aegean, 2016) focusing on tsunami risk assessment, and an MSc (University of Athens, 2017) in Historical Geology focusing on the geological signatures of tsunamis. Ioanna has been scientific associate with the National Observatory of Athens (2013-2019). Currently, she is with the Dept. of Geology and Geoenvironment, University of Athens, preparing her PhD thesis focusing on the earthquake and tsunami impact in Greece. She has published several research papers on earthquake and tsunami topics in peer reviewed journals and presented oral and poster papers in international conferences.

Marilia Gogou
Mrs Marilia Gogou has a BSc in Oceanography (University of the Aegean, Mitilini Island, 2011), and an MSc in Environmental, Disaster and Crisis Management (National and Kapodistrian University of Athens, 2017) focusing on coastal natural hazards, with a master's thesis on tsunami risk assessment in the South Aegean Sea. Marilia has been a scientific associate with the National and Kapodistrian University of Athens at the Dept. of Geology and Geonvironmental (2017–present) and is preparing her PhD thesis focusing on tsunami impacts and countermeasures in the Eastern Mediterranean. She has published several research papers and technical reports about coastal hazards and tsunami topics in peer reviewed journals and presented oral and poster papers in international conferences.

Spyridon Mavroulis
Dr. Spyridon Mavroulis is a Geologist with an MSc in Prevention and Management of Natural Disasters and a PhD in Geology. His research focuses mainly on hazard and risk assessment of earthquakes and their geodynamic phenomena. He has participated in more than 20 research projects on the integrated management of geoenvironmental impact from natural disasters. He is the author of scientific publications on post-disaster assessment and the mapping of the impact of natural disasters on the natural and built environment in peer reviewed journals and conferences. He has participated in more than 20 scientific missions of the NKUA in disaster affected areas in Greece and worldwide.

Efthymios Lekkas
Dr. Efthymios Lekkas is a Professor of Dynamic, Tectonic, Applied Geology and Natural Disasters Management in the National and Kapodistrian University of Athens (NKUA), President of the Department of Geology and Geoenvironment (NKUA) and President of the Earthquake Planning and Protection Organization of Greece (EPPO). He has published books on natural and technological hazards and disasters and more than 300 scientific publications in peer-reviewed journals and national and international congresses with subjects including tectonic, dynamic and applied geology, seismotectonics, earthquake engineering and management of natural and technological disasters. He has participated in and/or coordinated operational missions for major disasters management during the last 30 years in Greece and worldwide.

Gerassimos A. Papadopoulos
Dr. Gerassimos Papadopoulos is an earthquake and tsunami scientist with a BSc (Physical Sciences, 1975) and PhD (Geophysics, 1982), both from the University of Thessaloniki, Greece. He was post-doc researcher at MIT, USA (1984), visiting researcher at NIED (Japan, 1993) and visiting Professor, Tohoku University (Japan, 2004). He was a Researcher (1995-2002) and Research Director (2002-2018) with the National Observatory of Athens. He is the author of more than 120 reviewed papers and one monograph book with Elsevier, and is a PI in many national and EU-supported projects. Other positions held include: Chair, ICG/NEAMTWS/UNESCO (2017-2020); Vice-Chair, European Seismological Commission (2006-2008). He was awarded by the Academy of Athens (2002) and the EuroScience (2003).

Manolis Thravalos
Mr Manolis Thravalos is an award-winning professional photographer, and an associate of the National Observatory of Athens, Greece, and of the Eurokinissi photo agency. He contributed to the research of the Samos 30 October 2020 earthquake and tsunami event by providing photographic documentation of the impact that the event had οn the landscape and infrastructure of the island of Samos, Greece.
Zoom | Orient | As Lines | As Sticks | As Cartoon | As Surface | Previous Scene | Next Scene
We use cookies on our website to ensure you get the best experience. Read more about our cookies here.
Accept
We have just recently launched a new version of our website. Help us to further improve by taking part in this short 5 minute survey here. here.
Never show this again