State of the art approaches to Multi-robot localization and mapping still present multiple issues to be improved, offering a wide range of possibilities for researchers and technology. This paper presents a new algorithm for visual Multi-robot simultaneous localization and mapping, used to join, in a common reference system, several trajectories of different robots that participate simultaneously in a common mission. One of the main problems in centralized configurations, where the leader can receive multiple data from the rest of robots, is the limited communications bandwidth that delays the data transmission and can be overloaded quickly, restricting the reactive actions. This paper presents a new approach to Multi-robot visual graph Simultaneous Localization and Mapping (SLAM) that aims to perform a joined topological map, which evolves in different directions according to the different trajectories of the different robots. The main contributions of this new strategy are centered on: (a) reducing to hashes of small dimensions the visual data to be exchanged among all agents, diminishing, in consequence, the data delivery time, (b) running two different phases of SLAM, intra- and inter-session, with their respective loop-closing tasks, with a trajectory joining action in between, with high flexibility in their combination, (c) simplifying the complete SLAM process, in concept and implementation, and addressing it to correct the trajectory of several robots, initially and continuously estimated by means of a visual odometer, and (d) executing the process online, in order to assure a successful accomplishment of the mission, with the planned trajectories and at the planned points. Primary results included in this paper show a promising performance of the algorithm in visual datasets obtained in different points on the coast of the Balearic Islands, either by divers or by an Autonomous Underwater Vehicle (AUV) equipped with cameras. View Full-Text
Keywords: multi robot; Simultaneous Localization and Mapping; visual loop closure; image global signatures multi robot; Simultaneous Localization and Mapping; visual loop closure; image global signatures
►▼ Show Figures 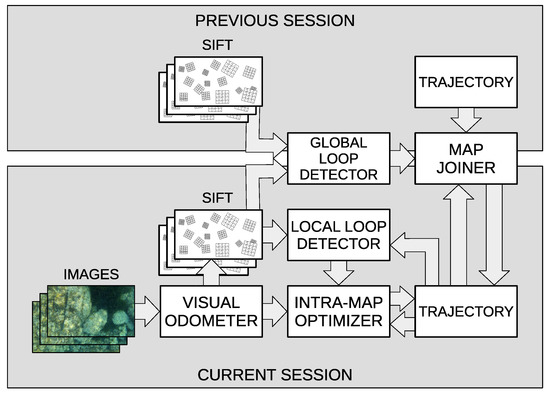