2.1. Smith Method and the Neutral Axis of Asymmetric Section of Damaged Ship

The Smith Method is widely used for the assessment of the ultimate strength of ships, by which, the cross-section of ship hull girder is discretised into units of stiffened panels and hard corner, and the ultimate strength is obtained by an increase of the curvature of the hull girder step by step. The solving process of the Smith Method is introduced in HCSR [10] in detail. The accuracy of the Smith Method relies on the stress–strain relationship and the calculation of the neutral axis.
In most of the cases of an intact ship in an upright floating position, there exist three symmetries: symmetry in geometry, symmetry in material, symmetry in load. Intact ships are usually symmetrical in geometry and material, and the most common two types of asymmetry are:

(1)
Geometrical asymmetry of damaged ships;
(2)
Load asymmetry due to an uneven distribution of goods, the flooding when the hull is damaged, or due to combination of the horizontal and vertical wave bending moments.

To apply the Smith Method, the position of the neutral axis must be determined. The convergence factor provided by HCSR for determining the position of the neutral axis takes the form where is the sum of the compressive forces of all units, the sum of the tensile forces of all units, and is the convergence factor for force equilibrium, which is usually smaller than 0.01.
It can be seen that Equation (2) is applicable only when all the three symmetries are present. Absence of any of the three symmetries would result in an asymmetric cross-section. For instance, in the case of a damaged hull, the cross-section is asymmetric due to flooding or loss of goods, and the force acting on it will be as shown in Figure 2. The rotation of the neutral axis is not accounted for in the original HCSR rules, and application of it with any correction will result in a wrong instantaneous position of the neutral axis in this case, which will then introduce errors into the subsequent calculation of the stresses in the units, and eventually lead to an inaccurate solution to the ultimate bending moment.
A new equilibrium criterion is required to determine the position of neutral axis of the asymmetric cross-section. According to the research of Choung et al. [14], an additional force vector equilibrium criterion, in addition to the force equilibrium shown in Equation (2), is to be satisfied: where is the sum of the forces acting on the cross-section, the total section bending moment, and the force vector convergence factor (usually smaller than 0.1°).

The instantaneous position of neutral axis can be obtained once the equilibrium criteria are met. Since both the transition and rotation need to be accounted for, an appropriate algorithm is required to obtain the solution with fair accuracy. This, actually, is a problem to search for the optimum solution in a given space [20].
In this study, the Particle Swarm Optimisation (PSO) method is used to obtain the solution. The PSO method approaches the optimum solution by collaborating and sharing information between the individuals of a group. Each particle has two properties: speed and location. Speed refers to the speed at which the particle is moving, and location indicates the direction of the motion. The optimum solution obtained for an individual particle is called individual best, while the optimum solution of all the particles is referred to as the global best. According to the individual best and global best, a new calculation is executed to update the speed and location of all the particles. This process is repeated until the convergence criteria are satisfied.
By the Smith Method, the position and rotation of the neutral axis will vary every time the curvature is increased, thus the two motions can be regarded as the two dimensions of the search space. Then the PSO can be applied to seek for the optimum global solution to the objective function. Since the translation and rotation vary at the same time instead of one by one, the actual instantaneous position of the neutral axis at a particular curvature can be obtained in a more direct manner. The flowchart of the PSO-based Smith Method, referred to as the improved Smith Method hereafter, is shown in Figure 3.

A polynomial fitting method was proposed by Shahid [24] for the fitting of relationship between bending moments in different directions. Equation (7) shows the general form of the polynomial fitting function: where is the estimate of the fitting function for the random variables , an independent regression coefficient, the coefficient of the first order term, the coefficient of the cross-quadratic term, and the error between the estimate and the real response.
In this study, the third-order polynomial fitting function is adopted. where and . Since concave curves, i.e., multiple-value functions, may appear in some cases, the following form is used instead.
Determination of the unknown coefficients is the key to the solution when applying the method, and, for which, the least square method is usually used.

For highly nonlinear systems, fitting with a single function usually results in poor accuracy, and increasing the order of the fitting function does not always help. Since the local variations of the samples are relatively small, a piecewise regression method is adopted to improve the accuracy of the polynomial fitting function, i.e., piecewise functions are used to describe the response relationship.
The accuracy can be improved by fitting with piecewise functions, but there still might be some large errors in some cases. For this reason, weights are introduced in order to obtain the optimum fit. To be specific, weights are used to improve the local fitting accuracy of each piece. The unknowns in Equation (8) can be calculated as follows. where where is the weight.
Then the weights are modified repeatedly until the accuracy requirement is satisfied. Once the fitting is done for all of the pieces, the values of the fitting functions at both ends of the piece, and , are obtained, and so are the slopes and . In order to ensure that the two fitting functions of the two adjacent pieces have the same curvature at the joint, the following boundary conditions are applied: Because it is an enclosed curve, the following boundary conditions are also applied The fitting function of each piece can be recalculated once the function values and the slopes at the ends of each piece are determined

The cross-section of a double hull VLCC provided by ISSC [25] is adopted for the investigation; see Figure 6. The types and dimensions of the stiffeners are listed in Table 2, and the Young’s modulus and the Poisson ratio are 206 GPa and 0.3, respectively. Typical cases of hull damage due to collision and stranding for the simulation are determined according to the HCSR, and the definitions of the damage are shown in Table 3 and Figure 7.

In order to validate the PSO-based Smith Method (Method 3), the ultimate strengths of the three cases shown in Table 4 are calculated, and the results are compared to those obtained with the original Smith Method (Method 1) and the linear search-based Smith Method (Method 2).
The ultimate strengths of the double hull VLCC in sagging and hogging conditions of each case are calculated with the three Smith methods. The results for the ultimate strengths are shown in Figure 8, Figure 9 and Figure 10, and those for the positions of the neutral axis are shown in Figure 11, Figure 12, Figure 13, Figure 14, Figure 15 and Figure 16. The ultimate sectional bending moments in the sagging and hogging condition of CASE 1 are compared with literature in Table 5, and the results for CASE 2 and CASE 3 are shown in Table 6 and Table 7.
It can be seen that, for CASE 1, the results obtained by the three methods for the bending moment and position of the neutral axis are very close. However, there are some differences between the results for CASE 2 and CASE 3. Particularly, the results obtained with Method 1 bear some differences with those obtained with the other two methods, and among them Method 3 is most accurate. For this reason, Method 3 is used to investigate the ultimate limit state function in this study.

In this study, a PSO-based Smith Method is applied to calculate the ultimate strength of the intact/damaged hull under the combined load of the vertical and horizontal bending moment. A weighted piecewise polynomial fitting method is devised to obtain the ultimate limit state function of ships under the combined load of vertical and horizontal bending moment. Based on the comparison of the results with literature, the following conclusions are drawn.

(1)
Compared to the implementations of the Smith Method, where only the translation of the neutral axis is considered, or the linear search method is applied to trace the position of the neutral axis, the PSO-based Smith Method is more accurate in obtaining the instantaneous position of the neutral axis, and helps produce more accurate results for the ultimate bending moment. Application of the PSO-based method also helps with more accurate fitting of the ultimate limit state functions.
(2)
The weighted piecewise fitting method proposed in this study is more accurate for the fitting of the ultimate limit state function than the explicit method and the original polynomial fitting method, especially in the case of a damaged hull due to collision.
(3)
Comparison of the fitting with and without the sample points removed shows that increasing the number of sample points may help with the accuracy of the explicit fitting and the original polynomial fitting method, but the improvement is limited, and the accuracy is still unsatisfactory in some cases.
(4)
Results obtained for the cases of the intact/damaged hull show that the explicit fitting method and the original polynomial fitting method produce fairly accurate results for the case of an intact hull. Thus, they can be used as the first choices for obtaining the ultimate limit state function of intact hulls for their simplicity, while the weighted piecewise fitting method can be used for the cases of damaged hulls.

The authors would like to thank all the reviewers for their valuable comments. 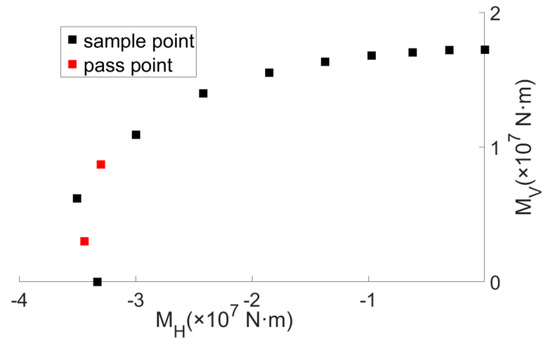 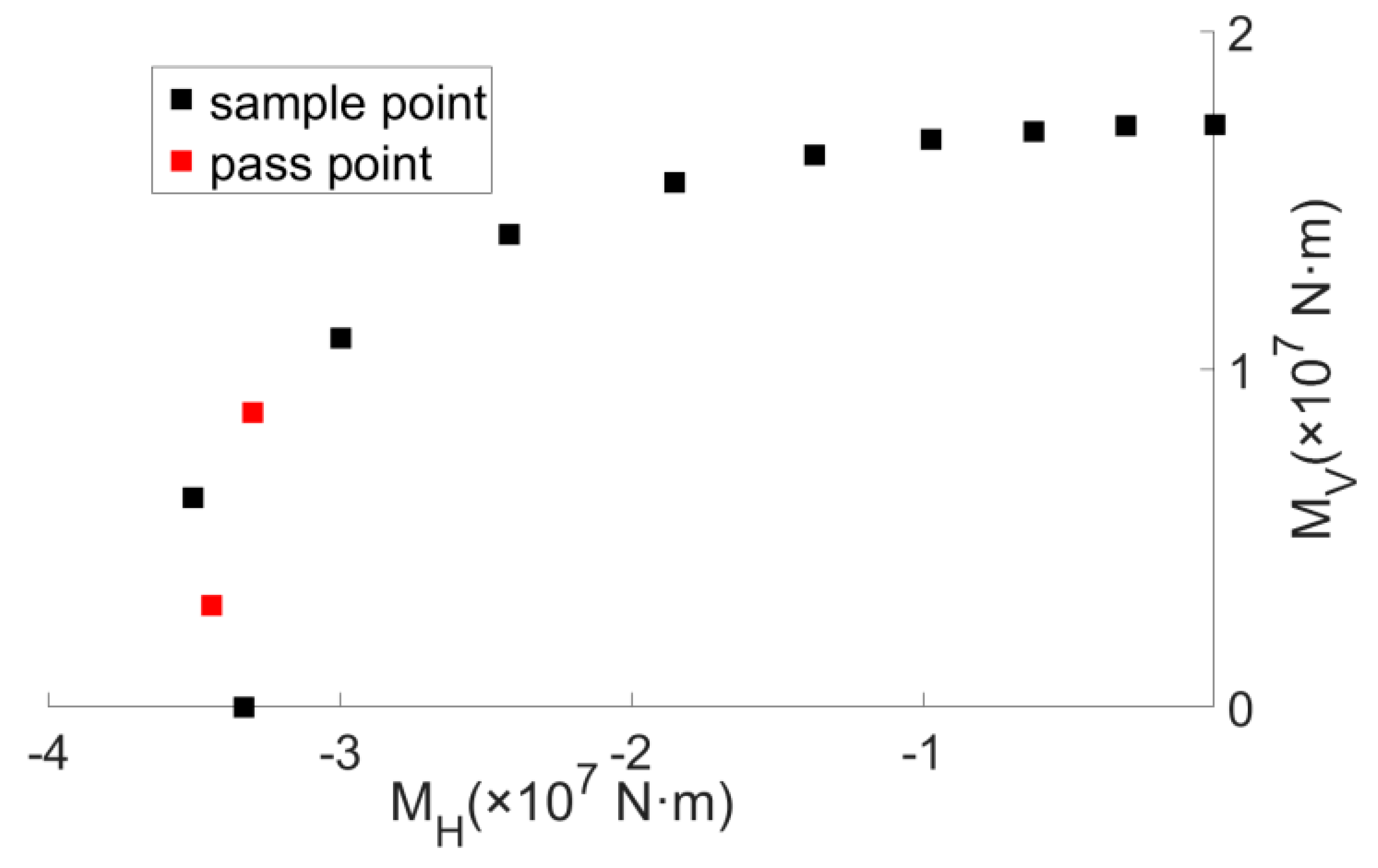 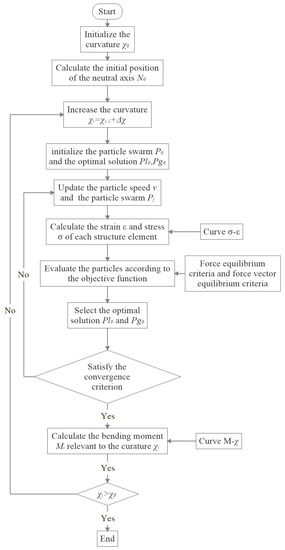 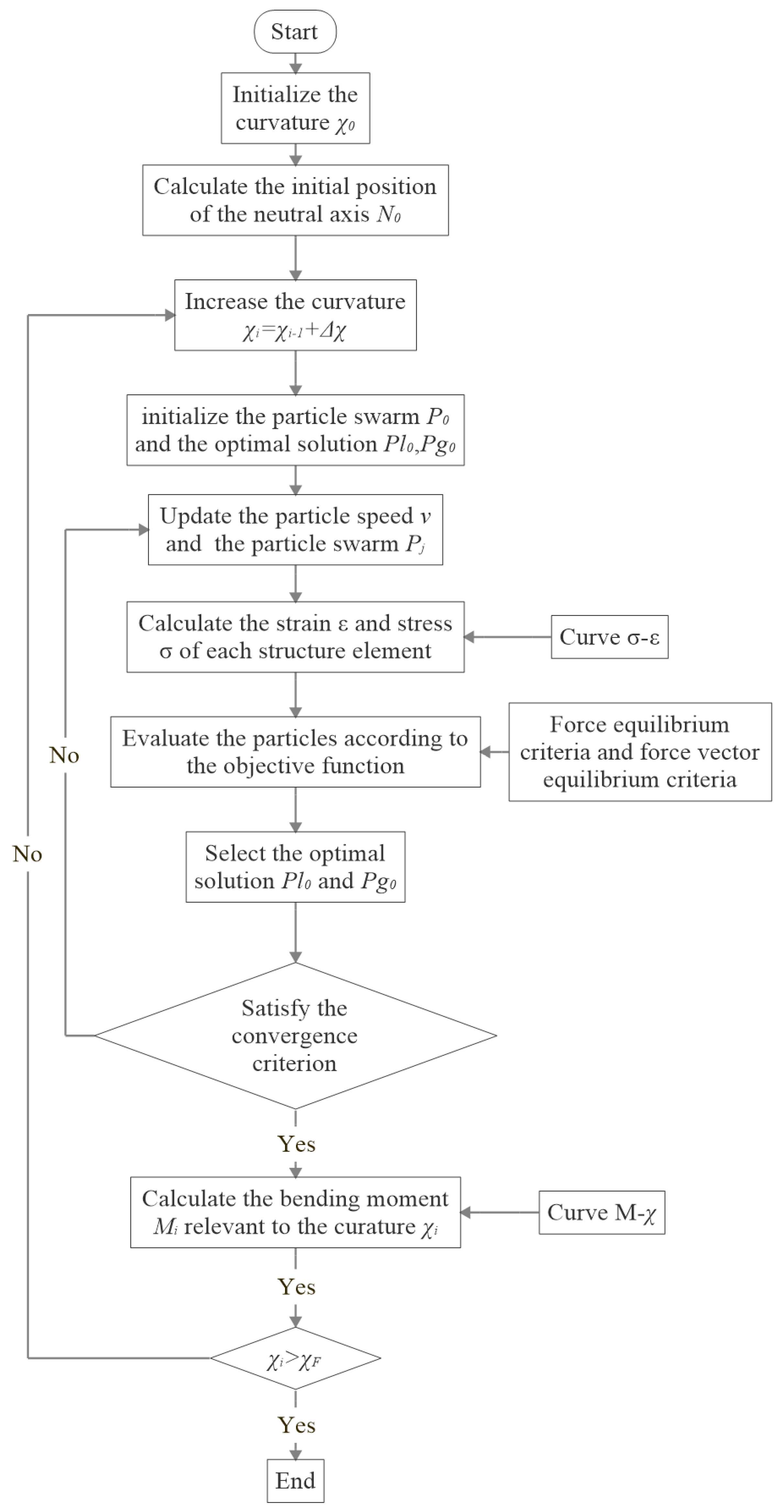 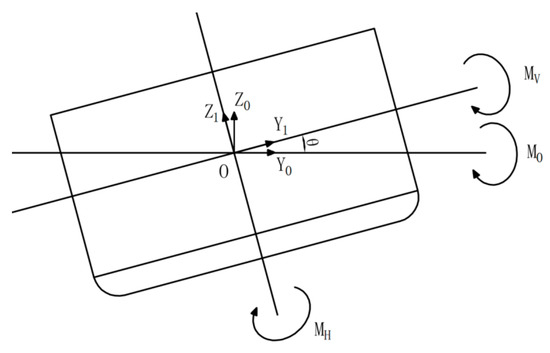 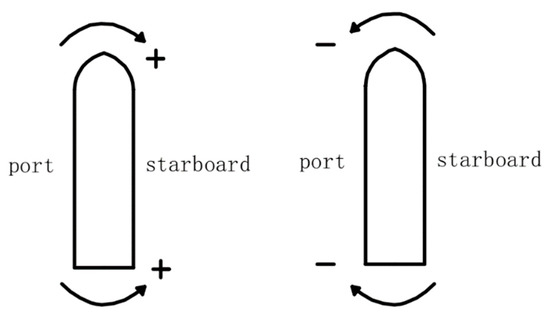 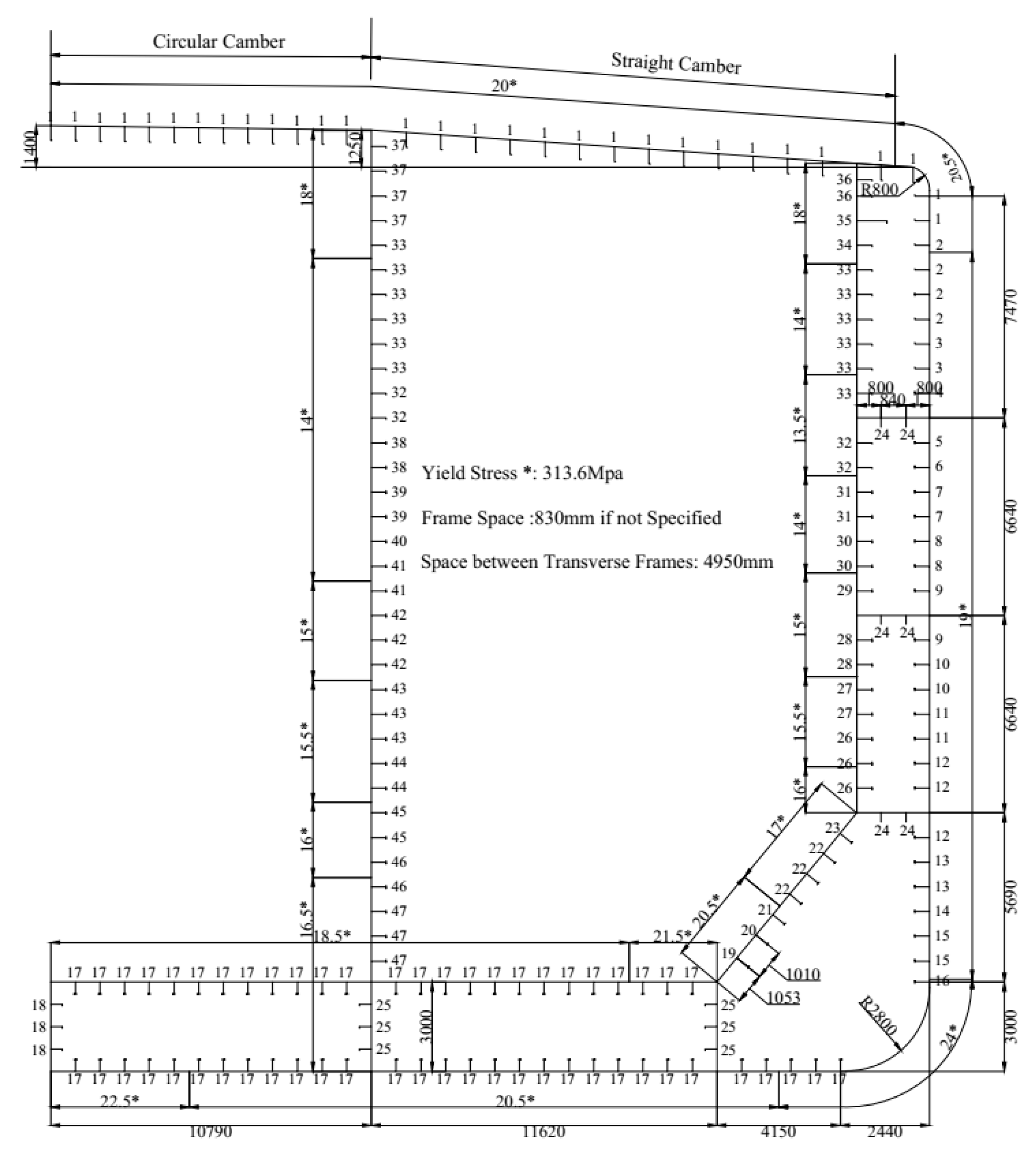 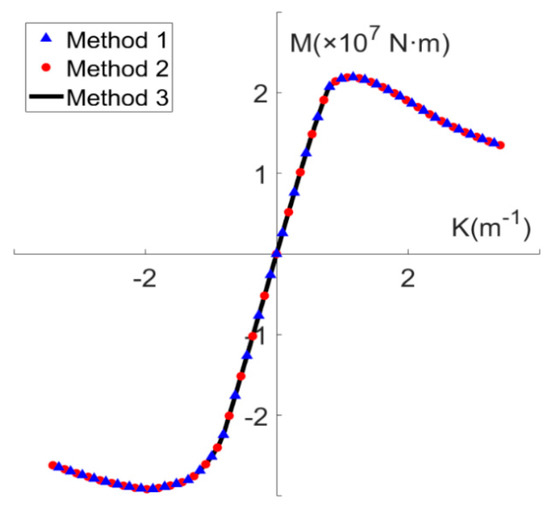 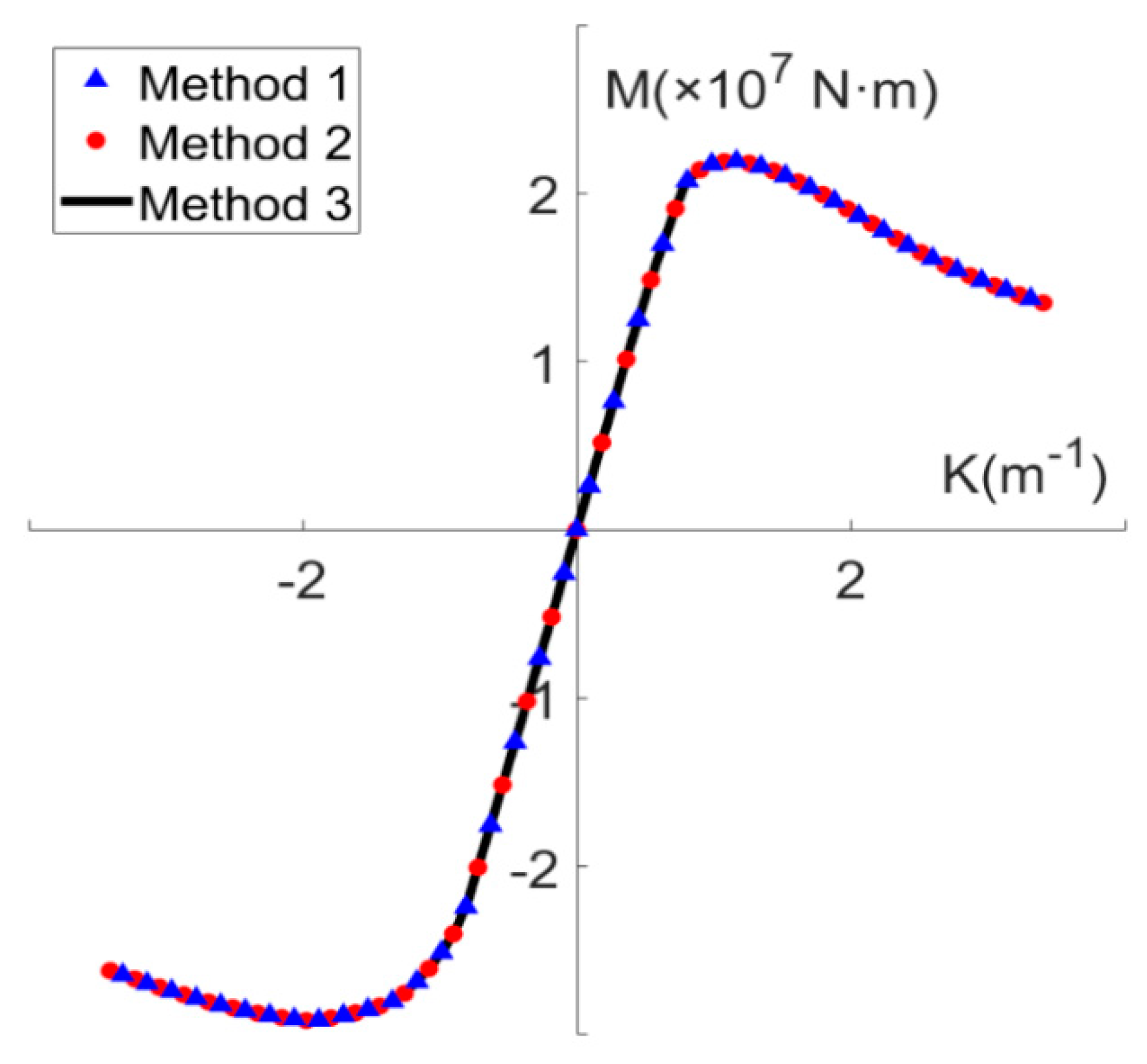 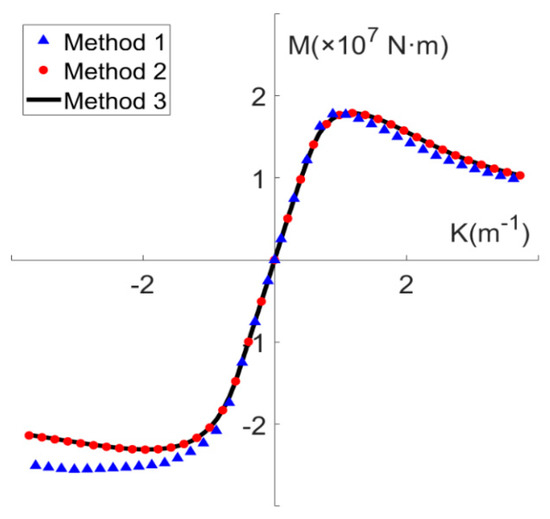 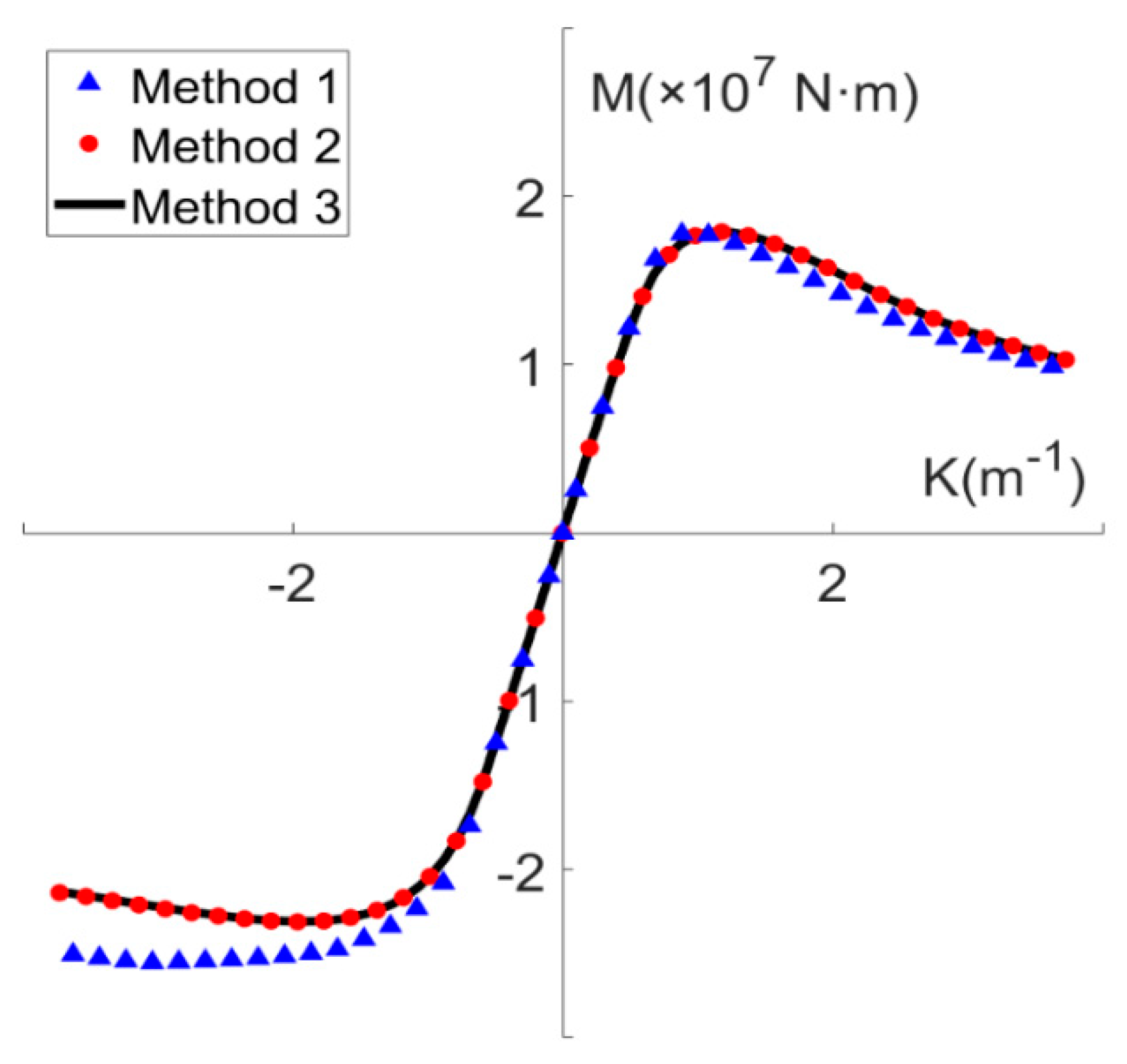 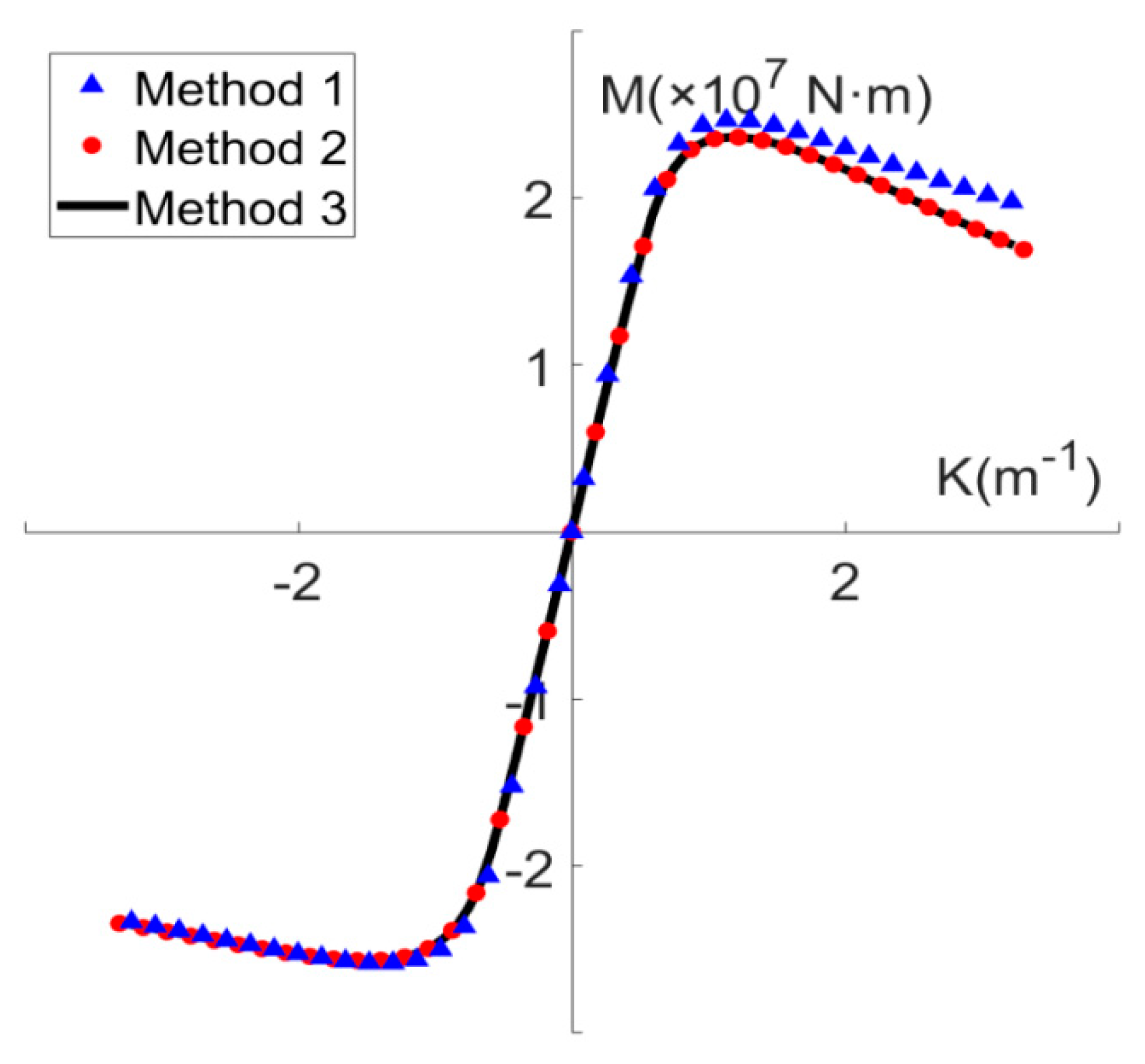 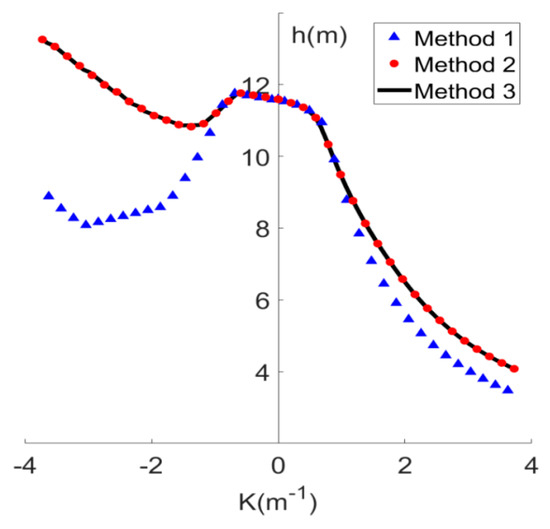 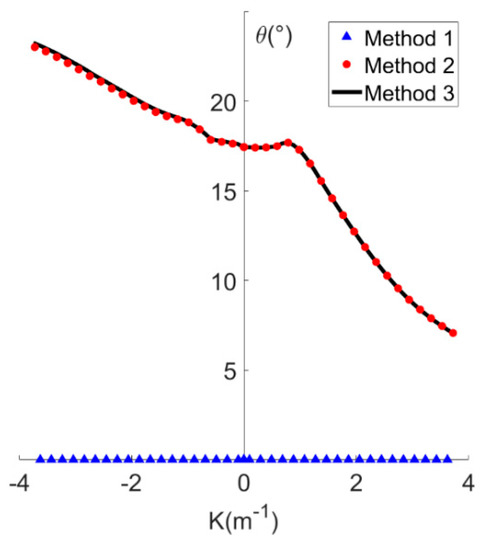 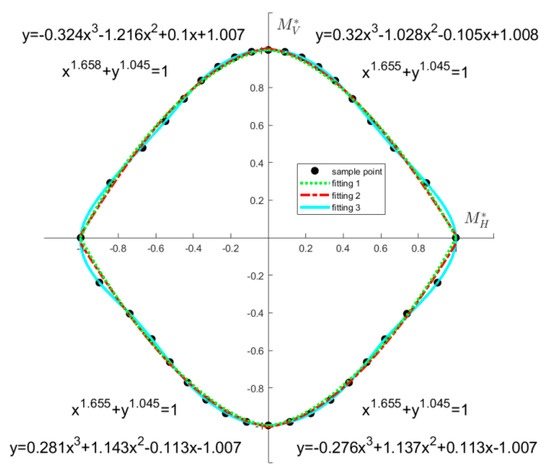 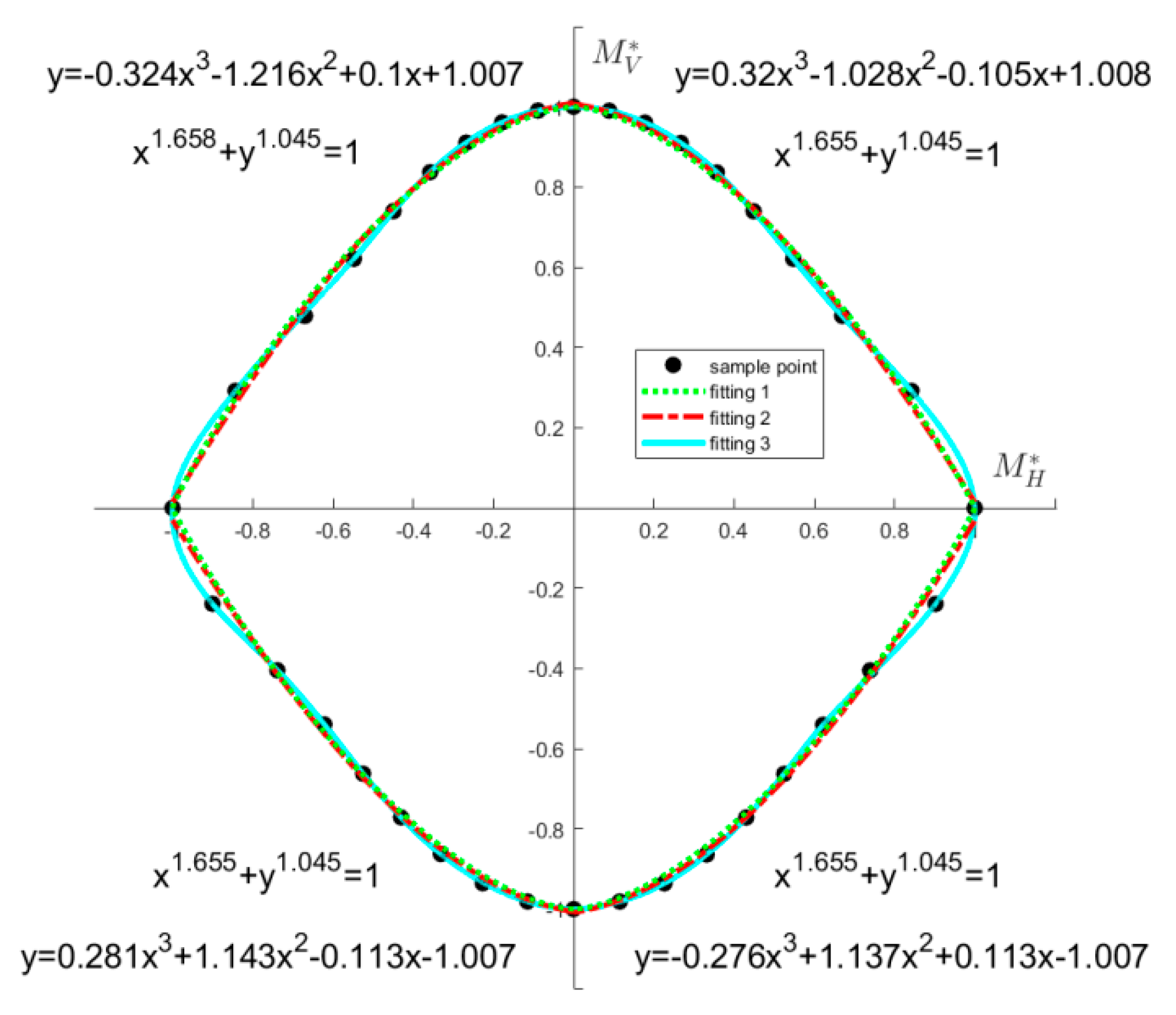 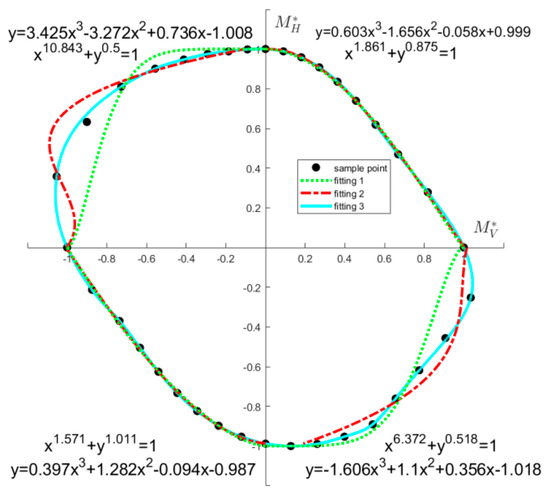 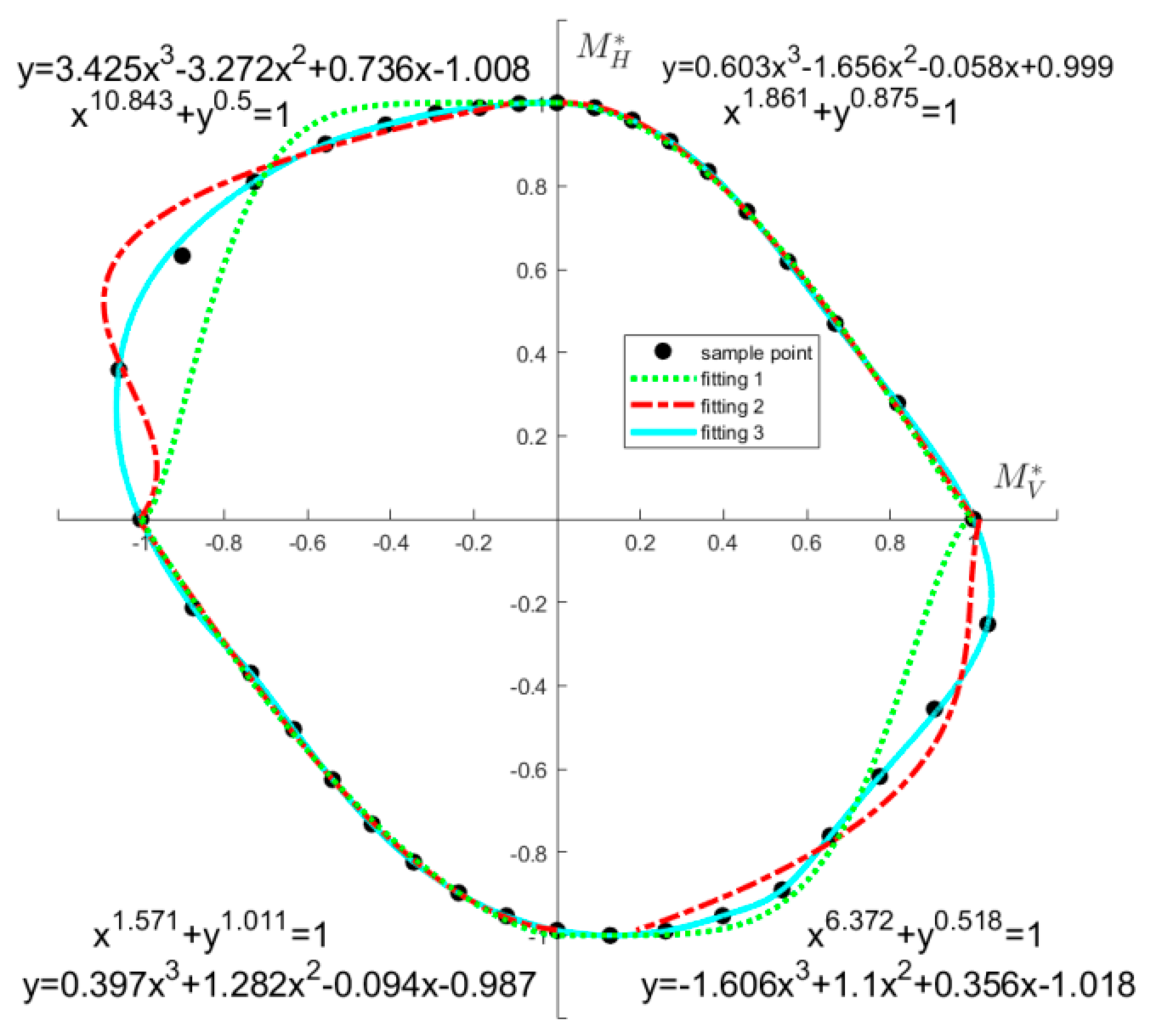 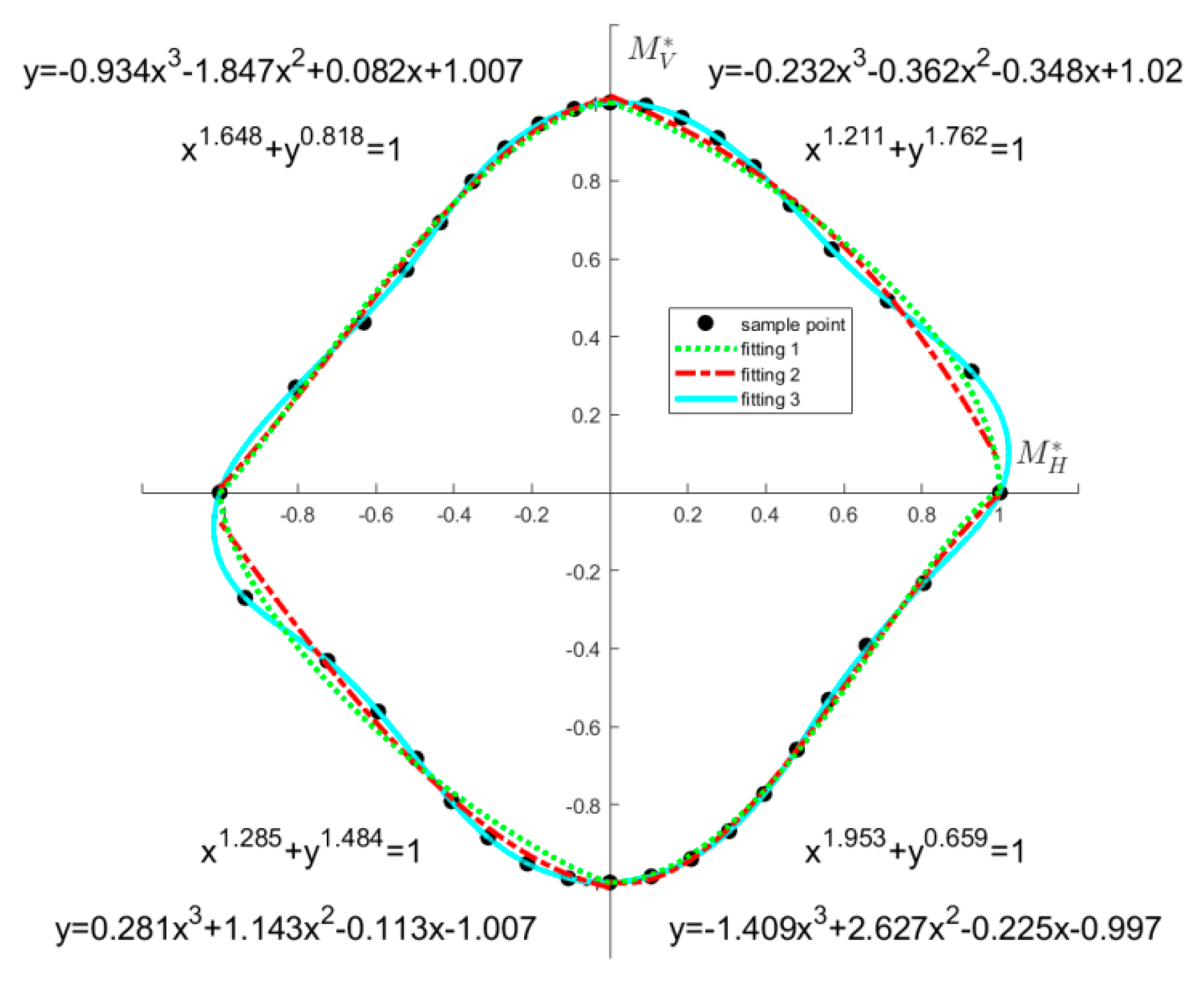 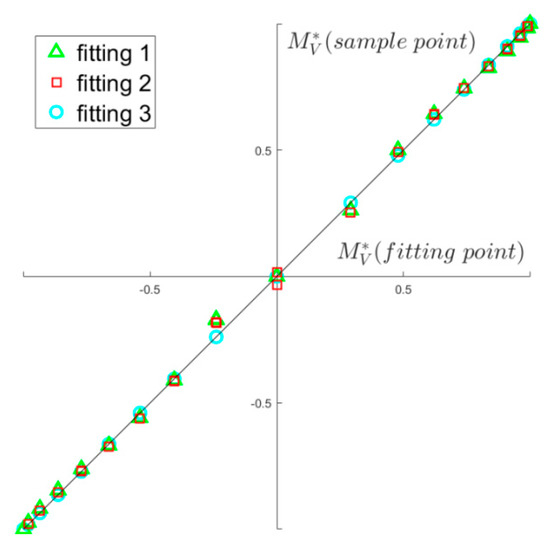 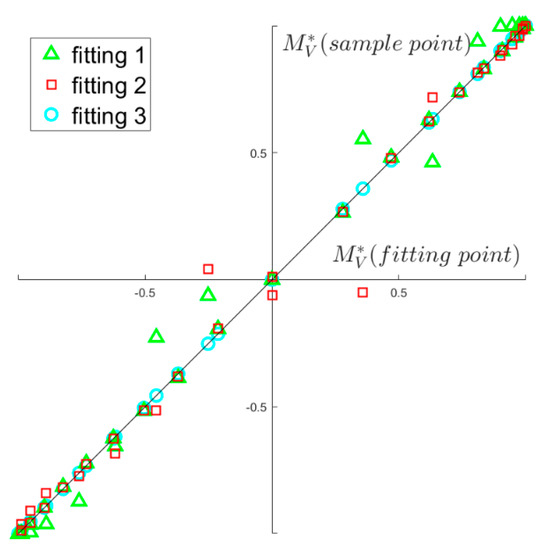 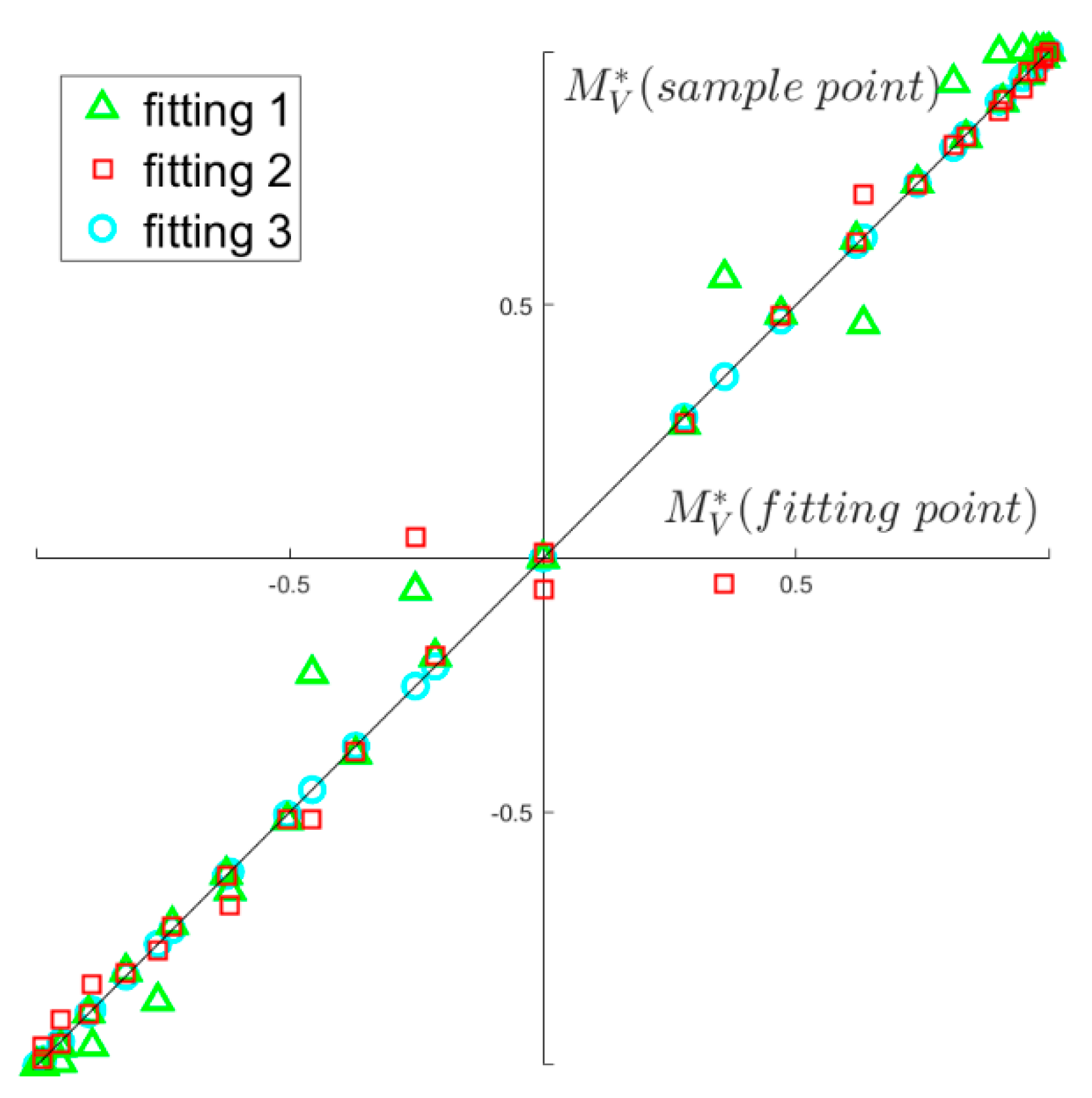 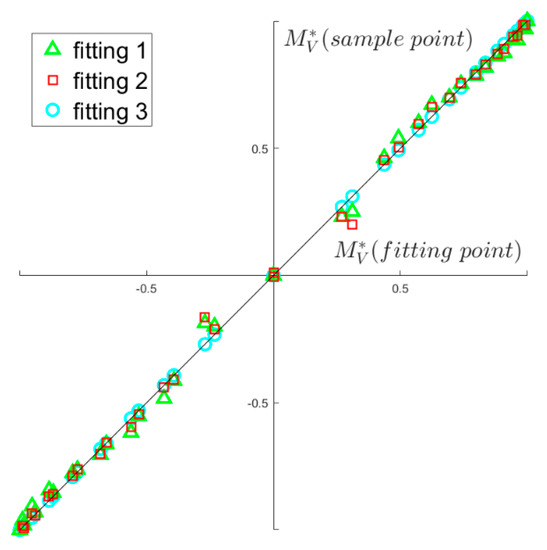 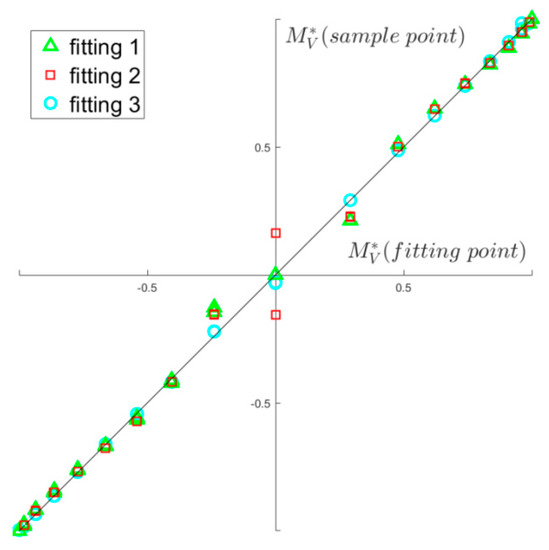 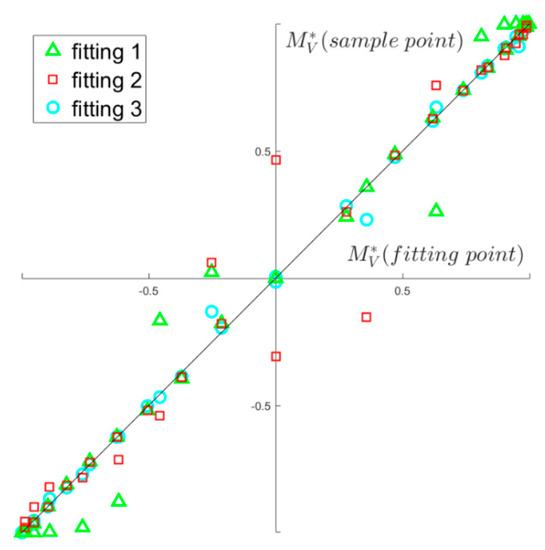 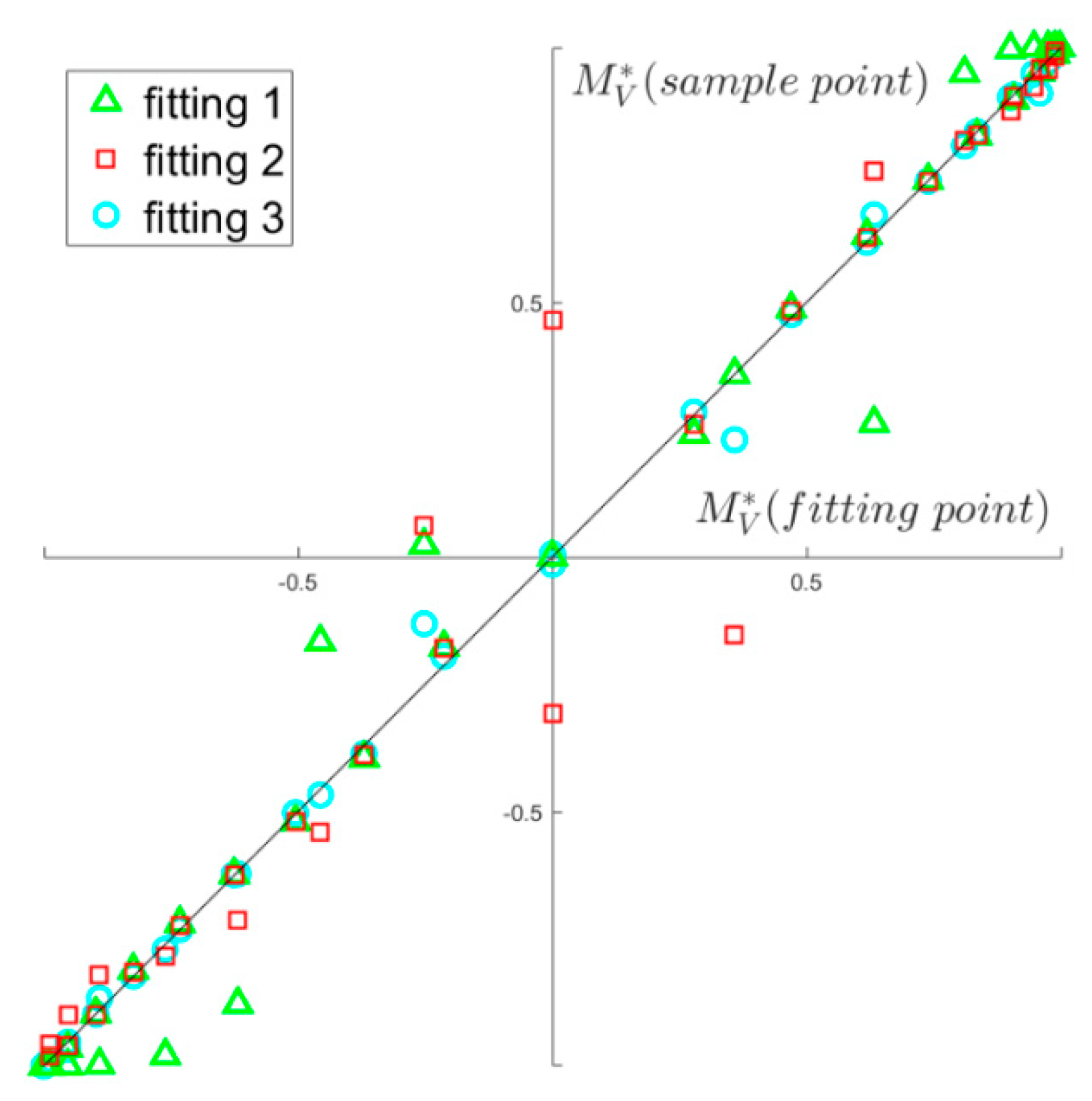