The study of resonantly forced baroclinic waves in the tropical oceans at mid-latitudes is of paramount importance to advancing our knowledge in fields that investigate the El Niño–Southern Oscillation (ENSO), the decadal climate variability, or the resonant feature of glacial-interglacial cycles that are a result of orbital forcing. Indeed, these baroclinic waves, the natural period of which coincides with the forcing period, have a considerable impact on ocean circulation and in climate variability. Resonantly Forced Waves (RFWs) are characterized by antinodes at sea surface height anomalies and nodes where modulated geostrophic currents ensure the transfer of warm water from an antinode to another, reflecting a quasi-geostrophic motion. Several RFWs of different periods are coupled when they share the same node, which involves the geostrophic forces at the basin scale. These RFWs are subject to a subharmonic mode locking, which means that their average periods are a multiple of the natural period of the fundamental wave, that is, one year. This property of coupled oscillator systems is deduced from the Hamiltonian (the energy) of the Caldirola–Kanai (CK) oscillator. In this article, it is shown how the CK oscillator, which is usually used to develop a phenomenological single-particle approach, is transposable to RFWs. Subharmonic modes ensure the durability of the resonant dissipative system, with each oscillator transferring as much interaction energy to all the others that it receives periodically. View Full-Text
Keywords: resonantly forced baroclinic waves; subharmonic modes; climate variability resonantly forced baroclinic waves; subharmonic modes; climate variability
►▼ Show Figures 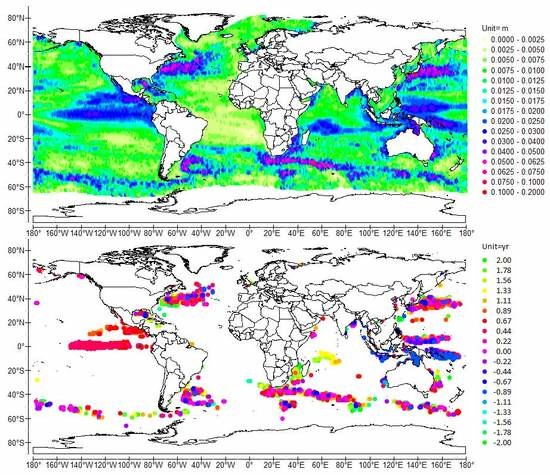