Determination of the Potential Thermal Gradient for the Mexican Pacific Ocean

The energy potential of the oceanic thermal gradients of the Mexican Pacific Ocean was valued theoretically, using seasonal oceanographic data on surface and 1000 m depth ocean temperatures from 1955 to 2013, taken from the World Ocean Database (WOD). The study was carried out to determine possible sites for Ocean Thermal Energy Conversion (OTEC), assuming that the minimum usable gradient is 20 °C and the maximum profitable distance from the extraction site to the shore is 10 km. Geographic Information System tools were used to compute thermal gradients and distances to shore all along the Mexican coast. Then, the optimal sites were identified. The results show that the best sites for OTEC exploitation are found in the southern Pacific coast on the littoral of the states of Guerrero and Oaxaca. View Full-Text
Keywords: OTEC; Mexican Pacific Ocean; thermal gradient OTEC; Mexican Pacific Ocean; thermal gradient
►▼ Show Figures 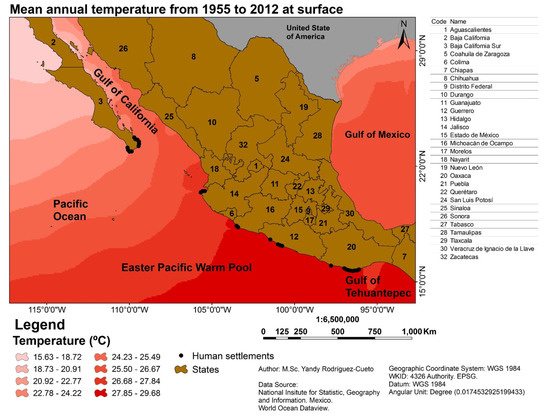