This paper presents an analysis of the spatial characteristics and duration of extreme wave events around the English coast. There are five geographic regions which are affected as coherent units under extreme wave conditions, incorporating a sixth micro-wave climate region (western Lyme Bay). Characteristic storm tracks are associated with each region. Storms affecting the East region (North Sea coast) seldom impact other areas of England, whilst in contrast, storms affecting the Southwest or Northwest also have some impact on the Southeast. Average storm duration varies from 5 h in the Northwest to 14 h on the East coast north of the Humber. Storm duration exceeding 12.5 h in the Southwest and East (northern half) near guarantees that storm waves will span High Water, when it is of most significance for beach management operations. Storms along the East coast can be associated with anticyclonic conditions, as well as low pressure systems. View Full-Text
Keywords: wave extremes; coastal; spatial footprint; storm duration; English coast wave extremes; coastal; spatial footprint; storm duration; English coast
►▼ Show Figures 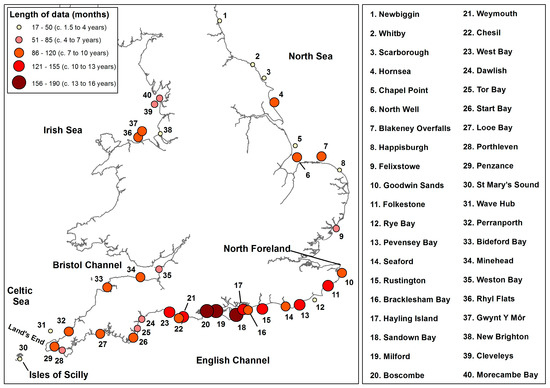