Large numbers of people live along and depend upon the world’s coastal resources. Human modifications of the coastal zone, in combination with climate induced environmental changes, have had a major effect on the natural ecological systems. GIS analysis of remote sensed data, combined with fieldwork and laboratory tests, can be used to determine the resultant eco-geomorphic changes that need to be managed sustainably on a worldwide scale. Modelling the eco-geomorphic dynamics between 1949 and 2016 on the Wandandian Creek delta (southeastern NSW, Australia) provides a case study of management options for such coastal resources. Results from the Wandandian Creek delta show that sand/silt sediment derived from the partially (22%) modified terrestrial catchment has prograded into the wave-dominated St. Georges Basin where it is impacted by nearshore processes. Clear spatio-temporal growth of the areal extent and elevation of the deltaic levees and sandspits, with their associated mangroves and saltmarshes, has occurred over the past 65 years. Although the growth rate has fluctuated during the study period, due to flood events in 1974, 1990s and 2010, the overall subaerial and subaqueous delta area has had an average growth of 4168 m2 annually with the shoreline extending 1.451 m/year on average. This geomorphic growth has stabilised the estuarine deltaic habitats with high proportions of nutrients and organic matter, particularly within saltmarsh, mangrove, Casuarina/Juncus and other mixed native plant areas. This research shows the importance of analysing morphological changes observed on the delta that can be related to both anthropogenic modifications and natural processes to the catchment and thus should be used in the development of catchment and coastal management plans. View Full-Text
Keywords: anthropogenic modifications; eco-geomorphology; remote sensing; GIS-modelling; sediment progradation anthropogenic modifications; eco-geomorphology; remote sensing; GIS-modelling; sediment progradation
►▼ Show Figures 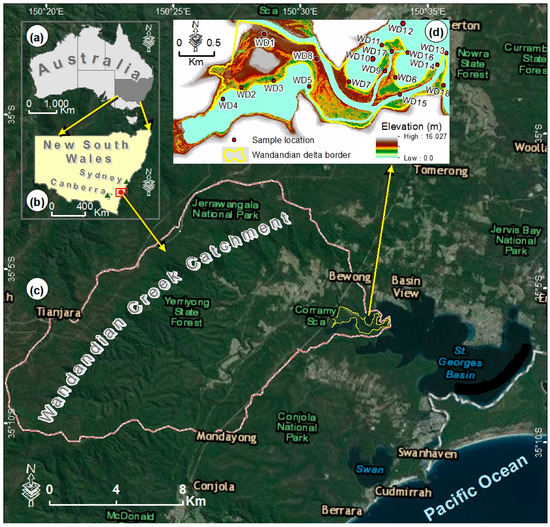