Revisiting the Carbonate Chemistry of the Sea of Japan (East Sea): From Water Column to Sediment

:
In this study, we investigated the carbonate system in sediments and water columns from five stations in the Sea of Japan (East Sea) (JES) during the R/V Hakuho Maru KH-10-2 research cruise in the summer of 2010. The total alkalinity (TA) and pH were measured. Adopting a saturation degree of 91% and 80% for the lysocline depth and calcite compensation depth (CCD), respectively, we found that those depths corresponded to 1360 and 1980 m. A comparison of the calcite saturation depths, lysocline depths, and CCD depths obtained for 1999 and 2010 suggests that acidification of the interior of the JES occurred. Sediment cores were retrieved using a multi-corer. In the sediment cores, a sharp decrease in the pH by 0.3–0.4 pH units was observed in the subsurface horizons (0–10 cm) compared with the pH of the seawater from the bottom horizons. The TA in the porewaters was significantly higher than that in the overlying seawater. The anaerobic degradation of organic matter is probably the main cause for the increasing TA in the sediments. The porewaters were significantly undersaturated with calcite and aragonite, except in that from the shallowest station, where the sediments below 7.5 cm were saturated, and even supersaturated, with calcite and aragonite. A linear correlation between the dissolved inorganic carbon and the TA for sediments with a slope of 0.9993 was found, despite there being potentially different ways for the diagenesis of the organic matter to occur. The diagenesis of organic matter in the top sediments of the JES forms gradients of TA and CO2* concentrations on the interface of “bottom water–sediments”. Averaged fluxes of TA and dissolved inorganic carbon (DIC) from the sediments to the bottom waters estimated by means of Fickian diffusion were calculated as 44 and 89 mmol/(m2 year) for TA and DIC, respectively.
Keywords:
carbonate system; marine sediments; acidification; Japan/East Sea

The carbonate system in seawater is one of the most important topics in modern oceanography. This system inherently links such global processes as acidification of the world’s ocean [1,2,3,4] and eutrophication of the coastal ocean [5,6]. Both global processes occur in the Sea of Japan (East Sea) (JES) and can play an important role in the geochemistry of the carbonate system. Using experimental data of total alkalinity (TA), pH, and dissolved inorganic carbon (DIC) obtained in 1992, 1999, and 2007 for depths of 50–1000 m, Kim et al. [7] estimated the effect of anthropogenic CO2 on the saturation depth for aragonite (). The anthropogenic CO2 that accumulated in the JES from 1800 to 1999 has variably displaced the depth upward by 50–250 m [7]. There is strong experimental evidence that acidification of the JES occurs due to the increasing carbon dioxide partial pressure in the atmosphere [8]. It was found that the acidification rate near the bottom of the JES is 27% higher than the rate at the surface [9]. Based on detailed hydrological and hydrochemical surveys conducted during the 2006–2012 period, seasonal hypoxia caused by eutrophication was discovered in the Peter the Great Bay of the JES [10,11]. There is increasing atmospheric anthropogenic nitrogen precipitation on the surface of the JES [12], which may be one of the reasons for the acidification of the interior JES [13,14]. The carbonate chemistry of the JES has been extensively studied [15,16,17,18,19,20], particularly in recent years [21,22,23].
However, our knowledge regarding the carbonate system parameters in the sediments of the JES is much more limited. In specific areas of the JES, active geochemical processes impact the carbonate system parameters of the bottom waters [24]. The most important are the results obtained under the umbrella of the Ocean Drilling Program [25,26] and during the study of the sulfate methane transition zone in the Ulleung Basin of the JES [27]. The state of the carbonate system of seawater, especially the saturation degree depth of calcium carbonate, impacts the sediment composition and calcium carbonate preservation in the ocean [28,29]. We believe that the main reason for the gaps in the study of the carbonate system in sediments is methodological problems with sediment and porewater sampling, and the measuring parameters for the carbonate system.
There are two main approaches for studying the carbonate chemistry of marine sediments. The first includes in situ measurements of the parameters and/or sampling [30,31,32,33], and the second includes the recovery of sediment cores with a consequential sampling of the porewaters and measurement of the carbonate system parameters on board ships [34,35,36]. Both approaches have limitations. The second approach was used in this study. During the R/V Hakuho Maru KH-10-2 cruise, sediment samples were recovered from five stations using a multiple corer. The pH values of the sediments and the TA of the porewaters were measured on board the R/V. For the same stations, carbonate system parameters were measured in water columns. The profiles of the measured TA, calculated pHin situ, and saturation degrees of calcite from the water columns and sediment cores are compared and discussed. The carbonate system of sediments of the JES is presented for the first time.

The JES is very well ventilated at all depths from the surface to the bottom, and oxygen in the intermediate waters is higher than in adjacent basins [37]. The subpolar front separates the JES into northern and southern parts at approximately 38° N–40° N. For this reason, stations located near the KH-10-2 cruise crossed a subpolar front (Figure 1).
The chemical composition of the sediments reflects and is controlled by the type of sedimentary environment, which mostly contains the productive processes of the studied area. There is almost no phytoplankton with carbonate skeletons in the JES [38]. Copepods form a major part of the zooplankton [39]. In the southern part of the JES on the shelf, foraminifera plays an important role in forming carbonaceous sediments [40]. A general view of the sediments of the JES is presented in [41]. According to that study, the sediments on the shelves and bank tops are largely coarse-grained green and moderately calcareous sands containing less than 1% organic carbon. Those on the basin slopes are fine-grained green (grading to olive-brown below a depth of approximately 1800 m) and slightly calcareous silts containing 1–2% organic carbon. Yellow-brown clayey silts containing less than 1% CaCO3 and less than 1% organic carbon were found below a water depth of approximately 2000 m covering the seafloor of the JES. These deepest sediments approach the character of red clay that occurs in the open ocean primarily at depths of more than 3000 m.

We found a temporal variability in the JES seawater regarding the calcite saturation degree depths of 1140 m and 960 m in 1999 and 2010, respectively. Adopting calcite saturation degrees of 91% and 80% for the lysocline and CCD, respectively, the lysocline depths decreased from 1500 m in 1999 to 1360 m in 2010, and the CCD depths also decreased from 2100 m in 1999 to 1980 m in 2010. This result suggests that the acidification of the interior of the JES occurred and that the sediments lost solid calcium carbonate over time. A comparison of the carbonate system in the seawaters and porewaters from the five stations located in the eastern part of the JES showed a sharp decrease in the pH by 0.3–0.4 pH units in the subsurface horizons (0–10 cm) compared to the pH of the seawaters of the bottom horizons. The TA in the porewaters was significantly higher than that in the overlying seawater. The anaerobic degradation of the organic matter is likely the main cause of the increasing TA in the sediments. The porewaters were significantly undersaturated with calcite, except for those from the CR34 core station, where the sediments below 7.5 cm were saturated, and even supersaturated, with calcite and aragonite. A linear correlation was found between the DIC and the TA in the sediments with a slope of 0.9993. The pH of the sediments was near-constant below 10 cm. This result suggests that there are complicated diagenetic reactions that work as a pH-stat during the anaerobic oxidation of organic matter when the sediments are located below the CCD horizon.
The diagenesis of organic matter in the top sediments of the JES forms gradients of TA and CO2* concentration on the interface of “bottom water–sediments”. The averaged fluxes of TA and DIC from sediments to bottom waters estimated by means of Fickian diffusion were 44 and 89 mmol/(m2 year) for TA and CO2*, respectively. If additional TA and CO2 concentrations come up from the sediments into the bottom waters and mix within 10 meters, the increments in the TA and DIC will be 4.4 and 8.9 μmol/kg each year, respectively. Such an increment will give a drop pH of 0.016 pH unit within 10 meters of the bottom waters.

Writing—original draft preparation and calculation of carbonate system parameters: P.T. (Pavel Tishchenko); synthesis and overall coordination, including retrieving sediment cores: J.Z.; TA measurements in seawater and porewater: G.P. and M.S.; pH measurements in seawater and sediments, and obtaining porewaters: P.T. (Petr Tishchenko) and S.S. All authors have read and agreed to the published version of the manuscript.

This study did not involve humans or animals.

This study did not involve humans.

Data are available in the Supplementary Materials.

We would like to thank all the Japanese researchers and students who participated in the international cruise as well as the Captain and crews of the R/V Hakuho Maru for assistance with deck operations and shipboard sampling. We would like to thank Vyacheslav Lobanov, who put much effort for successful scientific collaboration between Russia and Japan.

We declare no competing interests. 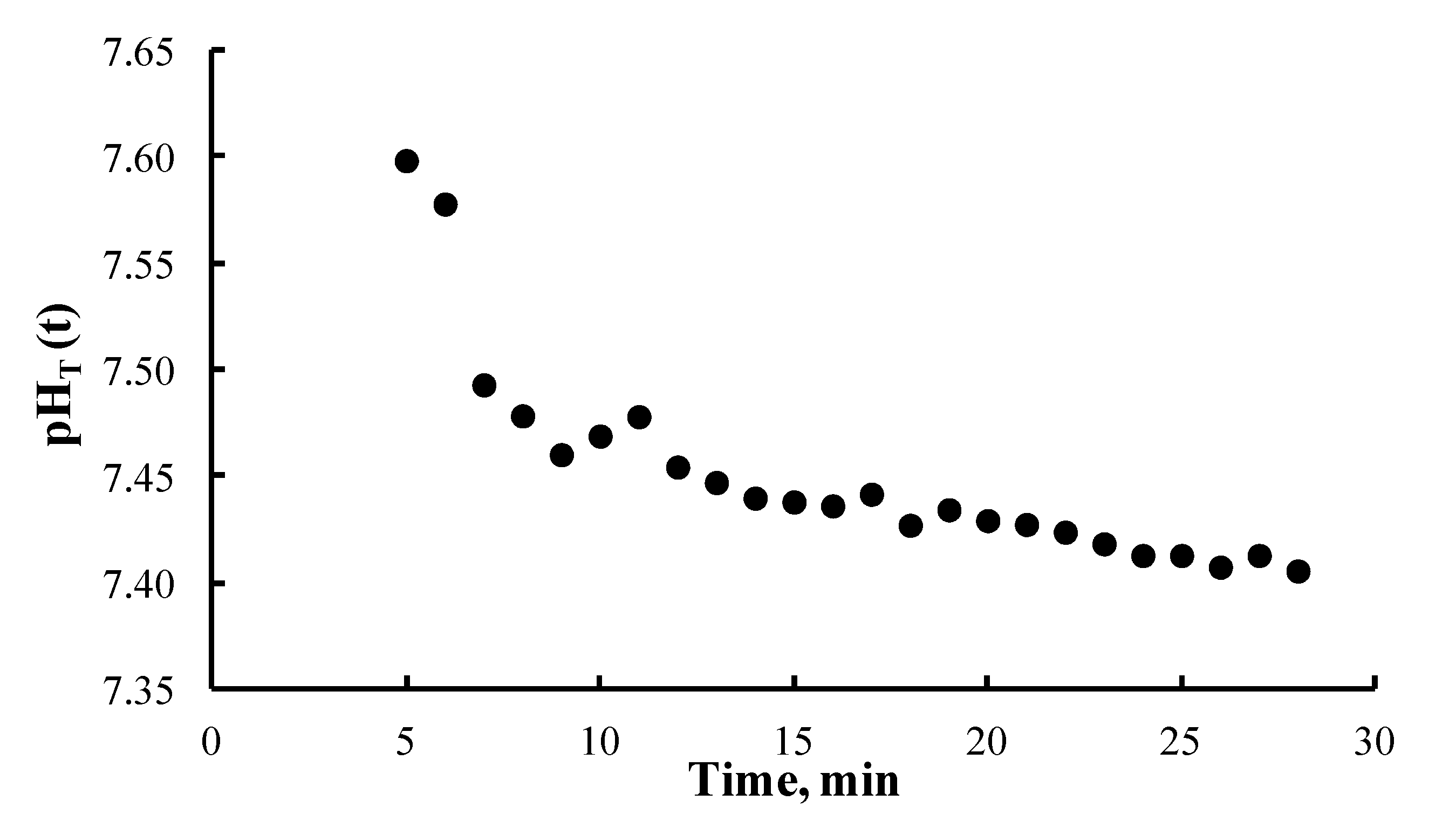 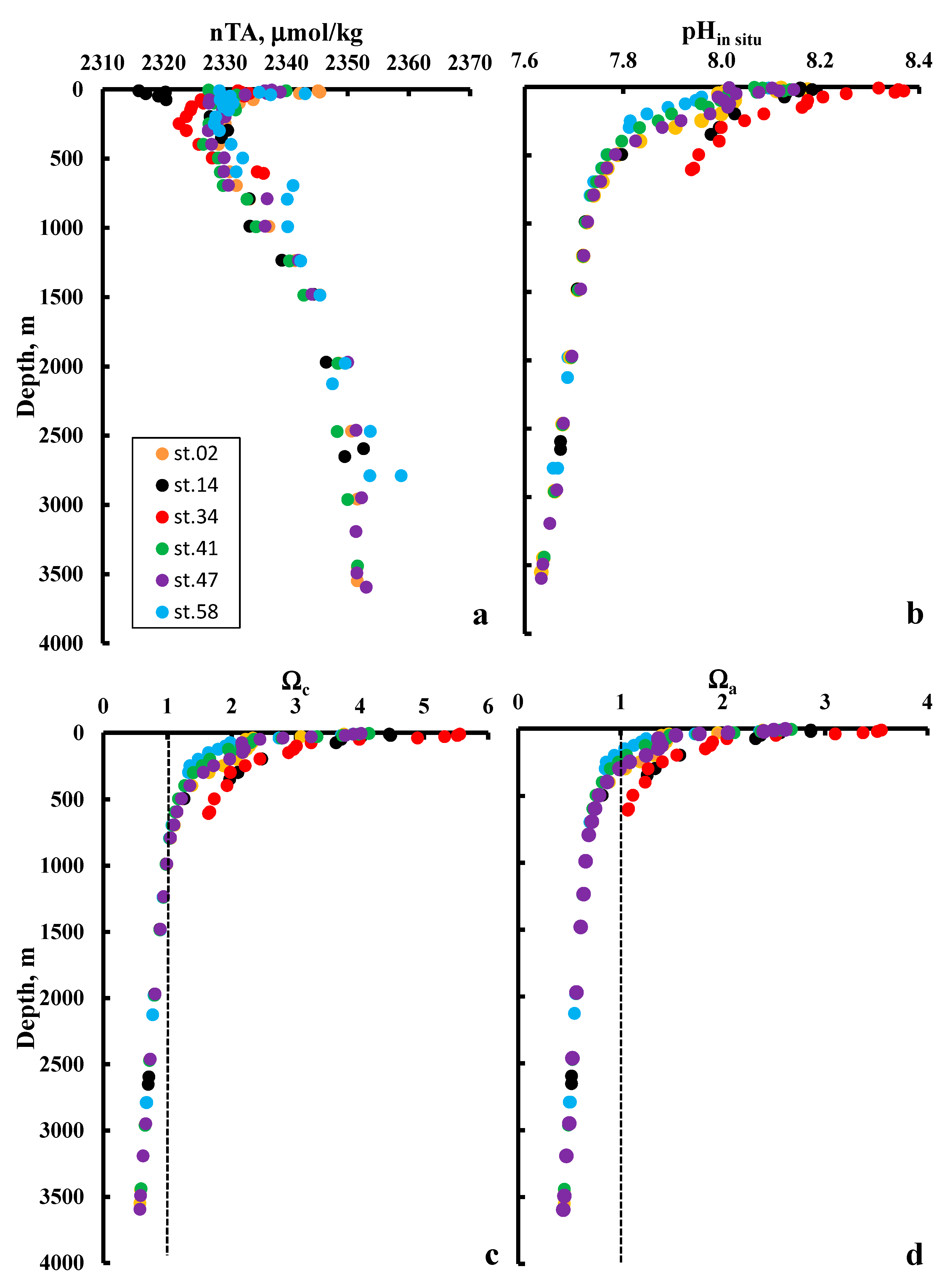 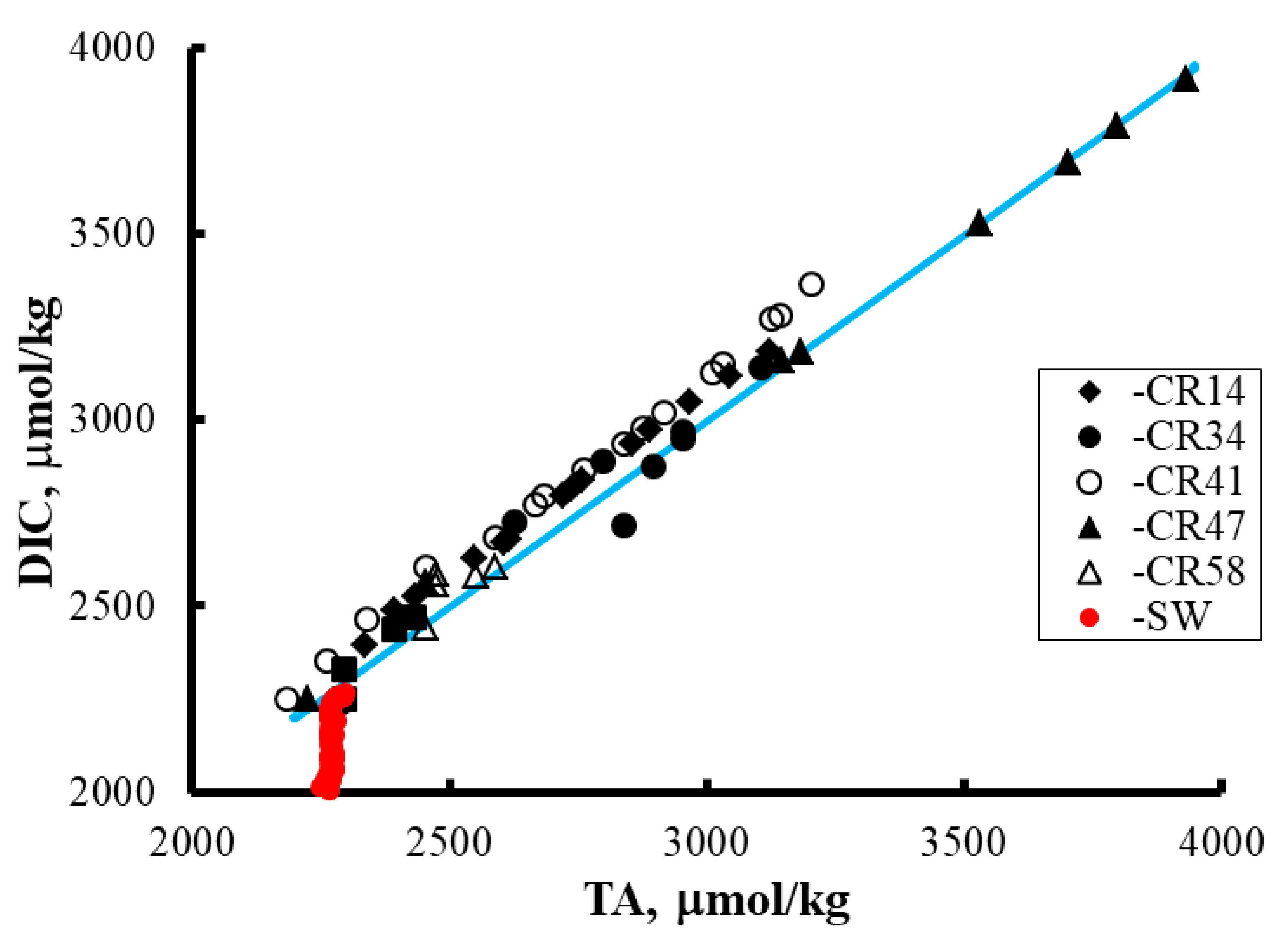 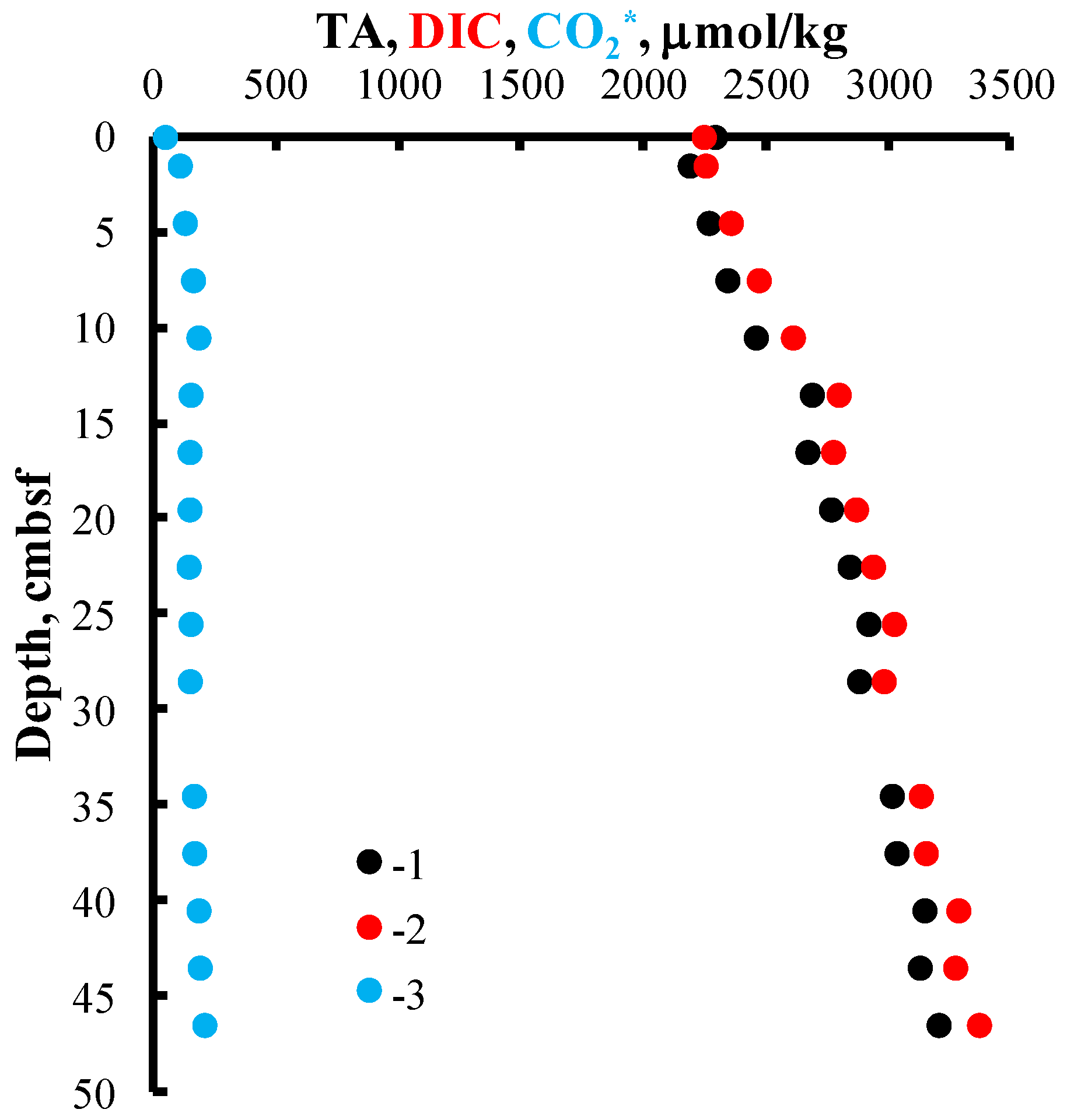