Challenges for Plant Breeders from the View of Animal Nutrition

Selenium (Se) is an essential trace mineral required for growth, development, immune function, and metabolism. Selenium exerts its biological effects as an integral component of selenoproteins (SePs). Deficiency or low Se status leads to marked changes in many biochemical pathways and a range of pathologies and disorders which are associated with SeP function. Animals, and presumably humans, are able to efficiently utilize nutritionally adequate levels of Se in both organic and inorganic forms. It is now clear that the bioavailability of Se varies depending on the source and chemical form of the Se supplement. There are a range of products available for dietary Se supplementation, however, organic sources have been shown to be assimilated more efficiently than inorganic compounds and are considered to be less toxic and more appropriate as a feed supplement. Yeast enriched with Selenohomoalanthionine (SeHLan) has recently become commercially available, and initial research suggests that it may be an efficacious source for the production of Se enriched animal products. View Full-Text
Keywords: selenium; selenoproteins; biochemistry; bioavailability; deficiency; excess; requirements; supplements; organic compounds selenium; selenoproteins; biochemistry; bioavailability; deficiency; excess; requirements; supplements; organic compounds
►▼ Show Figures 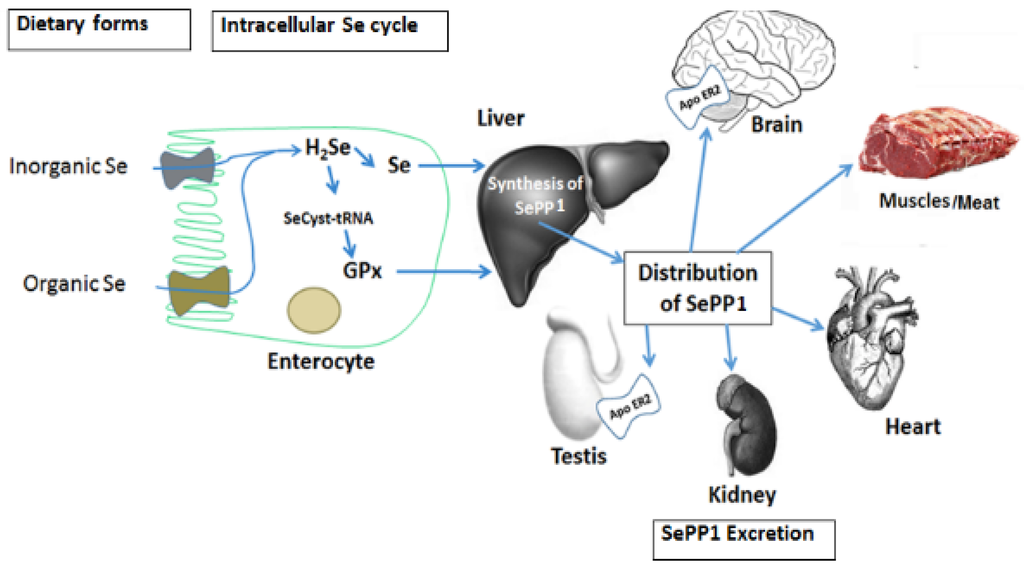