Earthworm Populations in Savannas of the Orinoco Basin. A Review of Studies in Long-Term Agricultural-Managed and Protected Ecosystems

The effect of phosphorus (P) deficiency on phosphatases activities in N2-fixing legumes has been widely studied in hydroponic culture. However, the response of acid phosphatase (APase) and phytase in rhizosphere, nodules and seeds of Phaseolus vulgaris to low soil’s P-availability is not yet fully understood. In this study, six genotypes of N2-fixing P. vulgaris were grown under contrasting soil P-availabilities; i.e., low (4.3 mg P kg−1) and sufficient (16.7 mg P kg−1) in the Haouz region of Morocco. At flowering and maturity stages, plants were harvested and analyzed for their phosphatases activities, growth and P content. Results show that, low P decreased nodulation, growth, P uptake and N accumulation in all the genotypes, but to a greater extent in the sensitive recombinant inbreed line 147. In addition, while seed P content was slightly reduced under low P soil; a higher P was noticed in the Flamingo and Contender large seeded-beans (6.15 to 7.11 mg g−1). In these latter genotypes, high APase and phytase activities in seeds and nodules were associated with a significant decline in rhizosphere’s available P. APase activity was mainly stimulated in nodules, whereas phytase activity was highly induced in seeds (77%). In conclusion, the variations of APase and phytase activities in nodules and seeds depend on genotype and can greatly influence the internal utilization of P, which might result in low P soil tolerance in N2-fixing legumes. View Full-Text
Keywords: acid phosphatases; nodules; phytase; low P soil; Phaseolus vulgaris; seeds acid phosphatases; nodules; phytase; low P soil; Phaseolus vulgaris; seeds
►▼ Show Figures 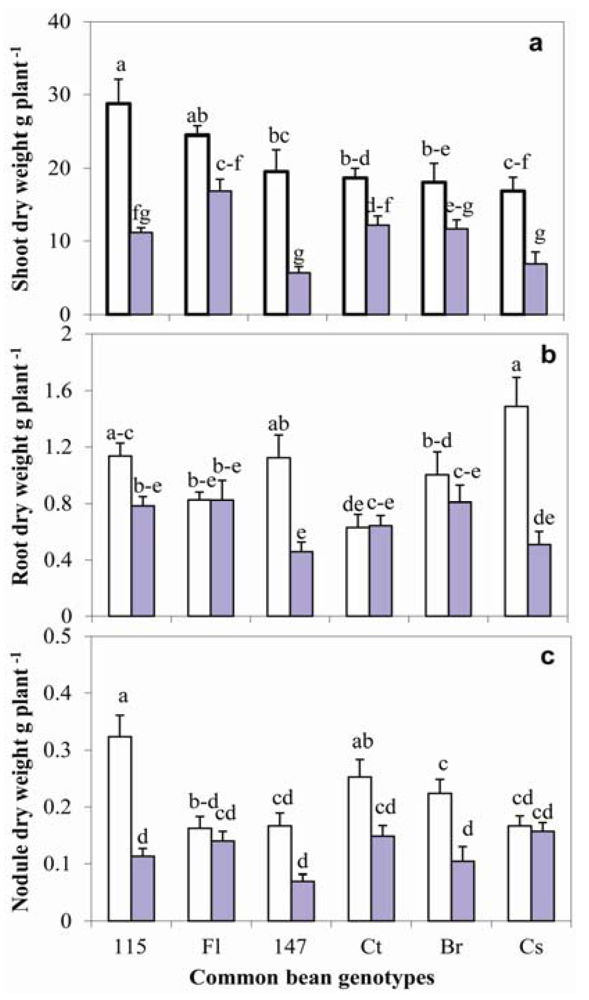