Knowledge, Attitudes, Practices, and Burden During the COVID-19 Pandemic in People with Parkinson’s Disease in Germany
Previous Article in Journal

Estimating the Risk of COVID-19 Death during the Course of the Outbreak in Korea, February–May 2020

MicroRNAs (miRNAs) have been proposed as a promising biomarker for various diseases including Alzheimer’s disease (AD). More attention has recently been focused on the diagnosis and treatment at earlier stage of mild cognitive impairment (MCI) for preventing its progression to AD. To identify potential pathologic markers for Aβ(+)MCI (Alzheimer’s pathologic change with MCI), we investigated miRNA expression profiles in the platelets from patients with Aβ(+)MCI, in comparison with those from Aβ(−)MCI (Non-Alzheimer’s pathologic change with MCI) and CNI (cognitively normal individuals). We found that let-7i-5p, miR-125a, miR-1233-5p, and miR-6787-5p were significantly downregulated, while miR-6880-5p expression was upregulated. Of these, only miR-1233-5p was significantly downregulated by Aβ treatment in both human platelets and their precursor megakaryocytes (MEG-01 cells). We explored the role of miRNAs by using miRNA mimics or inhibitors, and found that the diminished level of miR-1233-5p was associated with Aβ-induced increase in the expression of P-selectin and cell adhesion to fibronectin. Our results further indicated that Aβ-induced increase in platelet/MEG adhesion to fibronectin is likely mediated via P-selectin. In conclusion, this study suggests the downregulation of platelet-derived miR-1233-5p as a pathologic marker for Aβ(+)MCI. View Full-Text
Keywords: mild cognitive impairment; platelets; miRNA; amyloid-beta; P-selectin mild cognitive impairment; platelets; miRNA; amyloid-beta; P-selectin
►▼ Show Figures 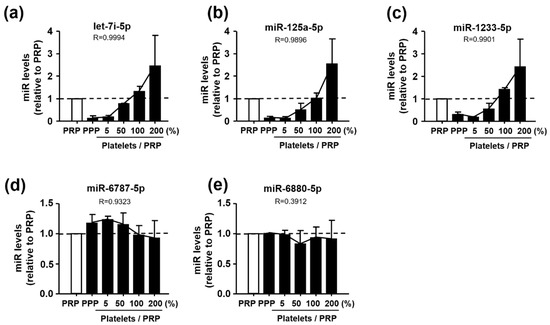