The Effect of Virtual Reality on Preoperative Anxiety: A Meta-Analysis of Randomized Controlled Trials
Previous Article in Special Issue

Objectives: In our study, we evaluated and compared the prognostic value and performance of the 6th, 7th, and 8th editions of the American Joint Committee on Cancer (AJCC) staging system in patients undergoing surgery for perihilar cholangiocarcinoma (PHC). Methods: Patients undergoing liver surgery with curative intention for PHC between 2002 and 2019 were identified from a prospective database. Histopathological parameters and stage of the PHC were assessed according to the 6th, 7th, and 8th editions of the tumor node metastasis (TNM) classification. The prognostic accuracy between staging systems was compared using the area under the receiver operating characteristic curve (AUC) model. Results: Data for a total of 95 patients undergoing liver resection for PHC were analyzed. The median overall survival time was 21 months (95% CI 8.1–33.9), and the three- and five-year survival rates were 46.1% and 36.2%, respectively. Staging according to the 8th edition vs. the 7th edition resulted in the reclassification of 25 patients (26.3%). The log-rank p-values for the 7th and 8th editions were highly statistically significant (p ≤ 0.01) compared to the 6th edition (p = 0.035). The AJCC 8th edition staging system showed a trend to better discrimination, with an AUC of 0.69 (95% CI: 0.52–0.84) compared to 0.61 (95% CI: 0.51–0.73) for the 7th edition. Multivariate survival analysis revealed male gender, age >65 years, positive resection margins, presence of distant metastases, poorly tumor differentiation, and lymph node involvement, such as no caudate lobe resection, as independent predictors of poor survival (p < 0.05). Conclusions: In the current study, the newly released 8th edition of AJCC staging system showed no significant benefit compared to the previous 7th edition in predicting the prognosis of patients undergoing liver resection for perihilar cholangiocarcinoma. Further research may help to improve the prognostic value of the AJCC staging system for PHC—for instance, by identifying new prognostic markers or staging criteria, which may improve that individual patient’s outcome. View Full-Text
Keywords: perihilar cholangiocarcinoma; Klatskin tumor; liver resection; TNM classification; 8th edition; AJCC; prognostic model perihilar cholangiocarcinoma; Klatskin tumor; liver resection; TNM classification; 8th edition; AJCC; prognostic model
►▼ Show Figures 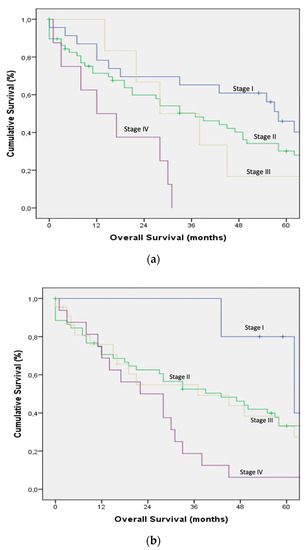