Systemic lupus erythematosus (SLE) is an autoimmune syndrome of unknown etiology, characterized by multi-organ inflammation and clinical heterogeneity. SLE affects mostly women and is associated with a high risk of cardiovascular disease. As the therapeutic management of SLE improved, a pattern of early atherosclerotic disease became one of the hallmarks of late disease morbidity and mortality. Neutrophils emerged as important players in SLE pathogenesis and they are associated with increased risk of developing atherosclerotic disease and vascular damage. Enhanced neutrophil extracellular trap (NET) formation was linked to vasculopathy in both SLE and non-SLE subjects and may promote enhanced coronary plaque formation and lipoprotein dysregulation. Foundational work provided insight into the complex relationship between NETs and immune and tissue resident cells within the diseased artery. In this review, we highlight the mechanistic link between neutrophils, NETs, and atherosclerosis within the context of both SLE and non-SLE subjects. We aim to identify actionable pathways that will drive future research toward translational therapeutics, with the ultimate goal of preventing early morbidity and mortality in SLE. View Full-Text
Keywords: neutrophils; atherosclerosis; interferon; vascular damage neutrophils; atherosclerosis; interferon; vascular damage
►▼ Show Figures 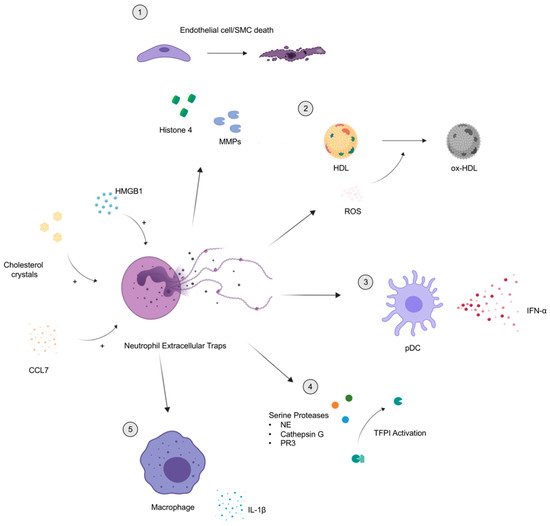