Medulloblastoma (MB) is the most common embryonal neuroepithelial tumor, with poor patient outcomes and secondary complications. In this study, we investigated the role of the B7 family of immune checkpoint homolog 3 (B7-H3) expression in MB angiogenesis. B7-H3, a co-inhibitory immune checkpoint, is highly expressed and is associated with lower overall survival in MYC+ MB’s. Evidence for a direct transcriptional role of MYC on the B7-H3 gene promoter was confirmed by MYC inhibition and anti-MYC antibody ChIP analysis. Interestingly, MYC inhibition not only downregulated the B7-H3 protein expression, but also rescued miR-29 expression, thus indicating a triangular regulatory relationship between MYC, miR-29, and B7-H3 in Group 3 MB cells. From RNA seq and IPAD assay, we observed a negative feedback loop between miR-29 and MYC that may control B7-H3 expression levels in MB cells. Our studies show that B7-H3 expression levels play a crucial role in promoting MB angiogenesis which can be inhibited by miR-29 overexpression via miR-29-mediated B7-H3 downregulation. The tumor suppressor role of miR-29 is mediated by the activation of JAK/STAT1 signaling that further plays a role in MYC-B7-H3 downregulation in MB. This study highlights B7-H3 as a viable target in MB angiogenesis, and that the expression of miR-29 can inhibit B7-H3 and sensitize MB cells to treatment with MYC-inhibiting drugs. View Full-Text
Keywords: medulloblastoma; MYC; B7-H3; miR-29; p-STAT1; angiogenesis medulloblastoma; MYC; B7-H3; miR-29; p-STAT1; angiogenesis
►▼ Show Figures 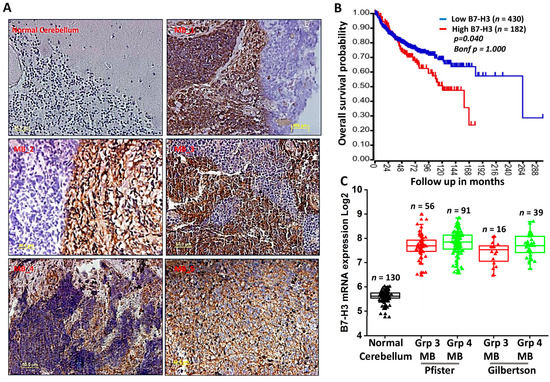