Illuminating an Invisible Epidemic: A Systemic Review of the Clinical and Economic Benefits of Early Diagnosis and Treatment in Inflammatory Disease and Related Syndromes

Gastric cancer is the fifth most common cancer in the world and the third most common cause of cancer-related death [1]. Surgery is the main treatment for gastric cancer, and this treatment is one of the most common surgeries performed in South Korea [2,3]. Although improvements to surgical devices and advances in surgical techniques have resulted in reduced mortality after gastrectomy, postoperative complications remain a clinically significant problem [4].
Surgical site infection (SSI) is one of the most common postoperative complications of gastrectomy. SSI is associated with prolonged hospitalization and increased mortality [5]. Therefore, it is important to investigate the risk factors for SSI.
Recently, the effects of different body compositions on SSI have been attracting attention. Especially, the effects of fat distribution and loss of skeletal muscle, called sarcopenia, have been focused on. Some studies have shown that visceral fat is a risk factor for postoperative complications in digestive surgery [6,7,8]. Sarcopenia, is also known to be associated with complications following digestive surgery [9,10,11]. However, each of these studies has used different body composition criteria. Because there are differences in body composition between patients from different ethnic backgrounds and regions, it is difficult to define the body composition criteria based on a specific value. To our knowledge, universally applicable criteria to define body composition have yet to be established. In addition, as almost all patients are given a computed tomographic (CT) scan before gastric cancer surgery, measuring body composition using a preoperative CT scan for predicting SSI could be worthwhile. Therefore, in this study, we aimed to investigate the most predictable body composition criteria to predict SSI after gastrectomy using a preoperative CT scan.

Between January 2015 and December 2015, 1067 patients underwent gastrectomy for gastric cancer in the Severance Hospital in Seoul, Korea. We the excluded patients who required emergency surgery, those with active infections, and those for whom a preoperative CT scan was unavailable. Consequently, we enrolled 1038 patients who underwent gastrectomy and who did not qualify for exclusion. A schematic flow of the study is shown in Figure 1. The study was approved by the Institutional Review Board (IRB) of Yonsei University Health System Clinical Trial Center (4-2017-1252). Because the study was retrospective and the study subjects were anonymized, the IRB waived the requirement for written consent from the patients.

The visceral fat area (VFA), subcutaneous fat area (SFA), and total abdominal muscle area (TAMA) of the patients were assessed using the latest preoperative CT scans. The cross-sectional VFA, SFA, and TAMA values were measured at the level of the third lumbar vertebra, as previously described [12]. Specific tissue distinction was performed by image analysis software based on Hounsfield unit (HU) thresholds, using an AquariusNET Server (TeraRecon, Foster City, CA, USA). By summing the tissue pixels and multiplying by the pixel area, the cross-sectional areas were calculated automatically and the tissue boundaries were corrected manually when needed. The VFA and SFA were identified by adipose tissue thresholds of −150 to −50 HU and −190 to −30 HU, respectively [13]. The TAMA values for the paraspinal and abdominal wall muscles were calculated and quantified by thresholds of −29 to 150 HU [14]. The cross-sectional VFA and TAMA values were normalized for the patients’ heights and were reported in units of cm2/m2 as the visceral fat index and muscle index, respectively. Examples of the areas of VFA and SFA are depicted in Figure 2.

Surgeons checked for SSI every day during the patients' in-hospital stays, and at every outpatient clinic or emergency room visit until 30 days after surgery [15]. Patients usually visited the outpatient clinic around seven days after discharge. If the patient did not visit a scheduled outpatient appointment, the surgical nurse called to check for complications, including SSI, and contacted them to visit the clinic. SSI was defined based on the 1999 Centers for Disease Control and Prevention National Nosocomial Infection Surveillance System manual [16].

Typical surgical procedures for open, laparoscopic, and robotic gastrectomy have been previously described in detail [17,18,19,20]. The da Vinci System (Intuitive Surgical, Sunnyvale, CA, USA) was used to perform robotic surgeries. Depending on the location of the tumors, a total or partial gastrectomy was performed. Lymph node dissection D1, D1+, or D2 was performed according to the Japanese gastric cancer treatment guidelines of 2014 [21]. The reconstruction type and method were selected according to the surgeons’ preferences [22].

To verify the normality of the continuous variables, the Kolmogorov–Smirnov test and Shapiro–Wilk test were conducted. The independent t-test and the Mann–Whitney test were used to compare the continuous variables of the two groups. The Chi-square test or the Fisher exact test was used to compare the categorical variables. Among variables with p < 0.05 in the univariate analyses, we selected variables for multivariate logistic regression based on the clinical significance known by previous studies [23,24,25,26]. After checking multicollinearity, a multivariate logistic regression including an interaction term was performed to identify the independent risk factors for SSI. The interaction between gender and VFA-to-SFA ratio was verified at a p-value of 0.004. In order to compare the predictive performance of body composition for the SSI, logistic regression models were used, and the models were compared using the receiver operation characteristic (ROC) curve and the area under the curve (AUC) value. The AUC value was extracted by using the standard error estimated from the bootstrap samples. As a method of comparing the predictive performance of the models, we used the bootstrap samples to show the confidence interval for the difference, and we used the DeLong method to compare with the control. The consistency between the predicted and the observed probabilities of the actual data was assessed using the Hosmer–Lemeshow test. The cutoff value, the AUC value, and the sensitivity and specificity of the selected model were determined using the Youden method, and the odds ratio (OR) was obtained by multivariate logistic regression analysis. p-values of <0.05 were considered statistically significant. All of the statistical analyses were performed using the R package, version 3.4.4 (The R Foundation for Statistical Computing, Vienna, Austria).

3.1. Clinical Characteristics of Patients with SSI after Gastrectomy

The clinical and surgical characteristics of the 1038 patients who had undergone gastrectomy are shown in Table 1. Among the 1038 participants, SSI occurred in 58 patients. Of these, 12 patients (20.7%) were diagnosed through post-discharge surveillance (incisional SSI for four patients (4/12, 33.3%); organ/space SSI for eight patients (8/46; 17.4%)). Male sex, smoking, an American Society of Anesthesiologists (ASA) score ≥3, neoadjuvant chemotherapy, and stage III or IV cancer were statistically significantly associated with SSI. For the variables associated with surgery, total gastrectomy, open surgery, D2 or more lymph node dissection, and longer operation times were significantly associated with SSI.

3.2. Risk Factors for SSI after Gastrectomy

In the univariate logistic regression analysis, male sex, smoking, an ASA score ≥3, neoadjuvant chemotherapy, stage III or IV cancer, total gastrectomy, open surgery, D2 or more lymph node dissection, and longer operation times were significantly associated with SSI. After checking the multicollinearity, gender, smoking history, surgical method, extent of surgery, and staging, and one of the body composition criteria were selected for multivariate logistic regression analysis based on the clinical significance. The results of the logistic regression analysis, including the VFA-to-SFA ratio, are shown in Table 2. A multivariate logistic analysis including the interaction term indicated that total gastrectomy (OR, 2.13; p = 0.017), stage III or IV cancer (OR, 2.66; p = 0.003), and a high VFA-to-SFA ratio (OR, 8.09; p < 0.001) were independent risk factors for SSI after gastrectomy. The effects of the interacting variables are presented separately in Supplementary Table S1.

3.3. Comparison of Cody Composition Variables to Predict SSI after Gastrectomy

Using the ROC curve and the AUC value, the body composition criteria variable with the highest predictive power for SSI was determined. As shown in Table 3, the AUC value of Model 1-6, which was subjected to multivariate logistic regression analysis by adding the VFA-to-SFA ratio to the other existing variables, was 75.11, which is higher than the AUC of the other models. In addition, the Hosmer–Lemeshow test was performed to evaluate the predictive performance of the model. The model was identified as appropriate, with a p-value of 0.3812. The superiority of the VFA-to-SFA ratio to the control was identified using the DeLong method using a p-value of 0.022. These results were also applied to the organ/space SSI, and the results about organ/space SSI are shown in Supplementary Tables.

3.4. The Threshold Values of the VFA-To-SFA Ratios are related to SSI after Gastrectomy

3.5. Comparison of the Treatment Outcomes after Gastrectomy according to Abdominal Fat Composition

This research did not receive any funding from agencies in the public, commercial, or not-for-profit sectors. 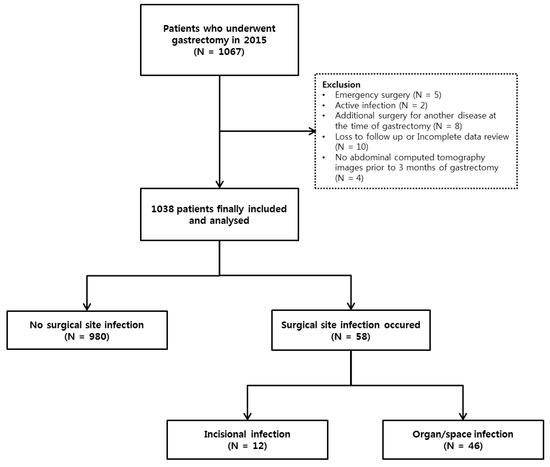 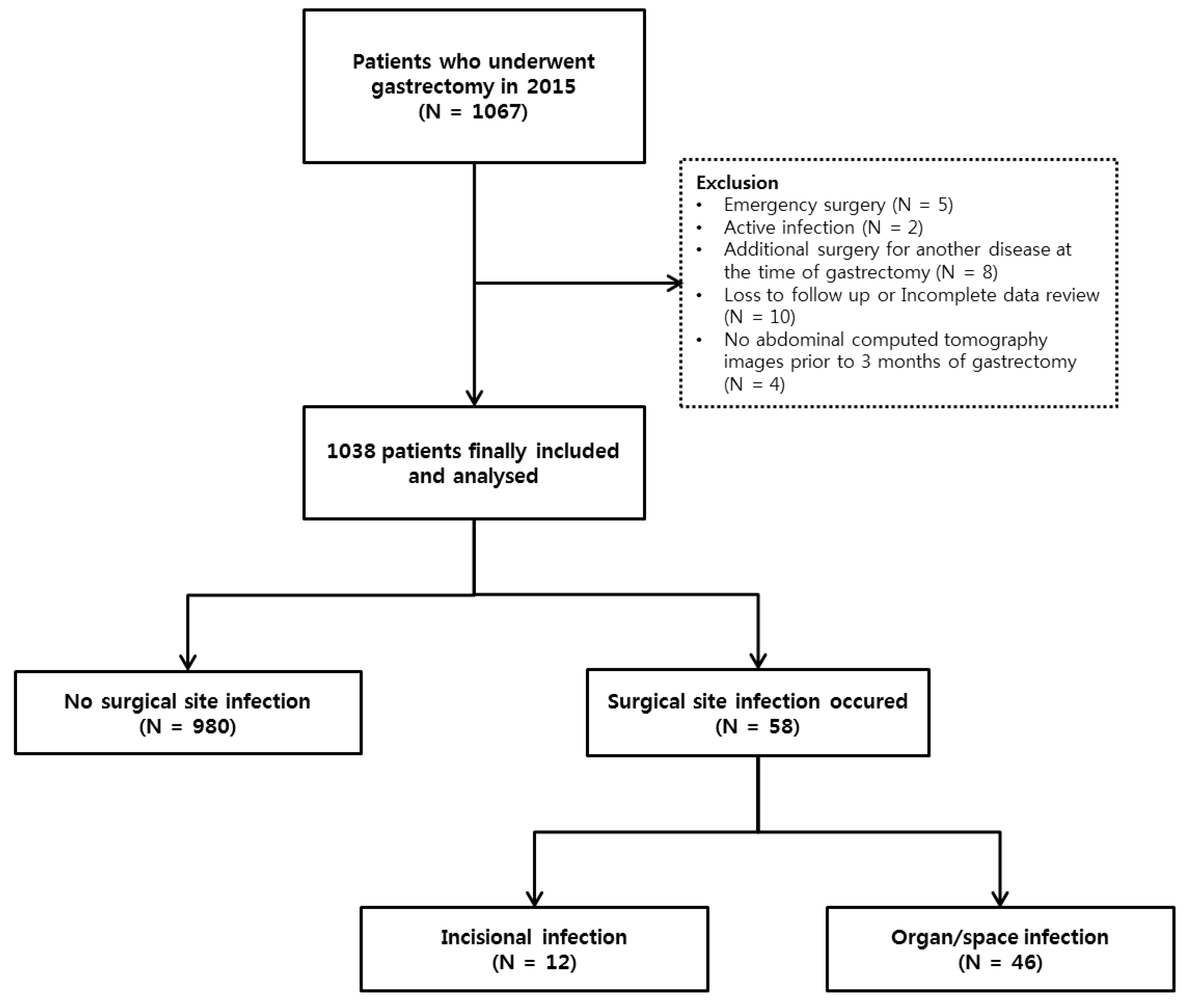 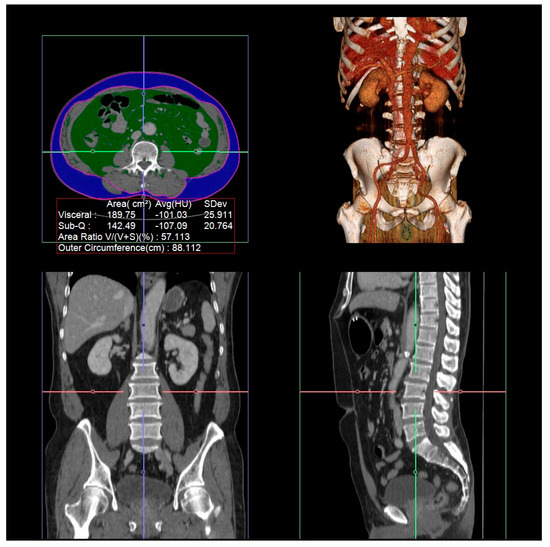 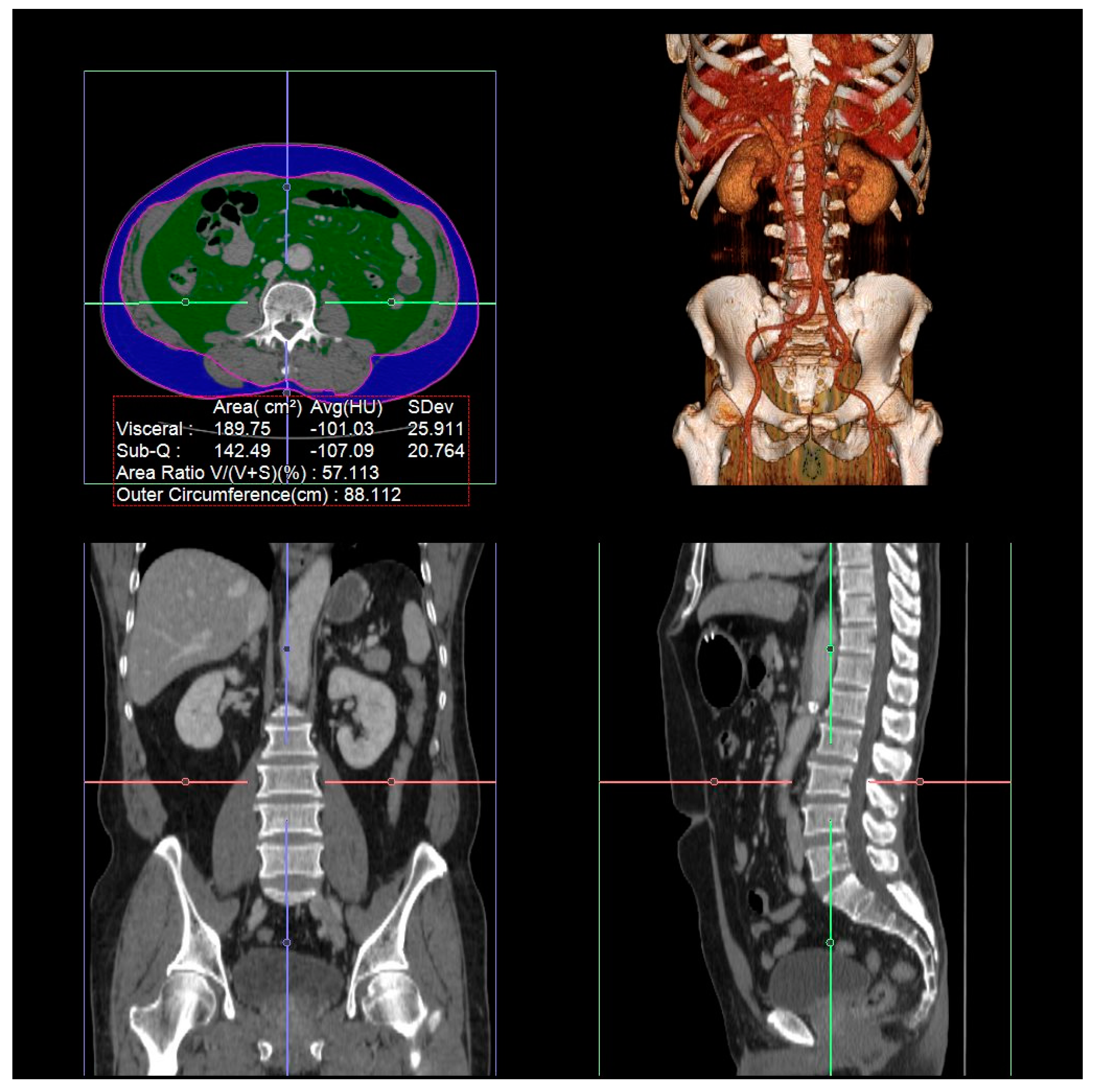