Synovial osteochondromatosis (SO) is a rare disease in which chondrometaplasia develops in the synovium of joints, bursa, and tendon sheaths. SO is found most frequently in the knee joint, while cases of SO developing in the shoulder joint are rare, accounting for only 1.9–5.2% of all SO cases. Moreover, most of these cases show secondary rather than primary involvement. In a patient with SO associated with extensive rotator cuff tearing and marked arthropathic changes, we performed mass resection and reverse shoulder arthroplasty (RSA), and obtained good pain relief and functional improvement. The patient was a 75-year-old woman who had developed left shoulder pain five years earlier without any known precipitating factor. The range of motion of the left shoulder showed extremely severe restriction, with flexion 80°, abduction 60°, and external rotation 0°, and prominent impingement symptoms. On plain radiographs and computed tomography (CT), prominent shoulder arthropathic changes were found. On plain magnetic resonance imaging (MRI), around the shoulder, an irregular hypointense region was identified in the center on T1-enhanced images, while hyperintense nodular lesions with a hypointense center were detected on T2-enhanced images. Since extensive rotator cuff tearing was also found, a diagnosis of OS associated with rotator cuff tearing and arthropathic changes was made. Surgery consisted of resection of a whitish mass-like floating body in the center of the joint followed by RSA. The postoperative course was uneventful, and one year postoperatively there was no recurrence of pain and the range of motion of the left shoulder had improved to flexion 140°, abduction 130°, and external rotation 30°. Moreover, no complications such as recurrence of osteochondromatosis, implant loosening, or infection were seen. On histopathological examination, the loose body was found to consist of a cartilage component and bone tissue with hyalinization. No findings indicative of malignancy were apparent, and since nodular cartilage arrangement was found, primary osteochondroma was diagnosed. These findings suggested that physical friction between the rotator cuff and the mass was the cause of the rotator cuff tearing, and that the extensive rotator cuff tearing accounted for the progression of the associated extremely severe arthropathic changes. View Full-Text
Keywords: synovial osteochondromatosis; reverse shoulder arthroplasty; massive rotator cuff tear; arthropathy synovial osteochondromatosis; reverse shoulder arthroplasty; massive rotator cuff tear; arthropathy
►▼ Show Figures 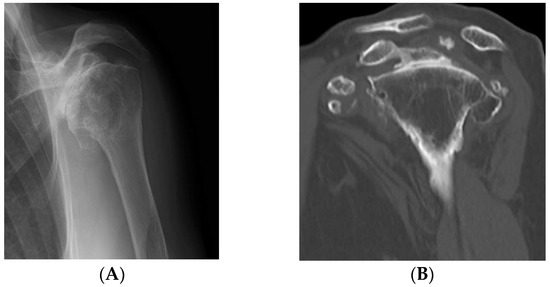