Evaluation of the Effect of Oral Pyridostigmine on the Ileus after Abdominal Surgery: A Blinded Randomized Clinical Trial
Previous Article in Journal

The Gender Impact on Morphogenetic Variability in Coronary Artery Disease: A Preliminary Study

Despite the fact that cardiovascular disease (CVD) was long thought to be a disease of the male gender, recent studies suggest that it is more common in women with certain risk factors (RF) that are unique to the female gender (gestational diabetes and hypertension) [1]. Due to the fact that the female gender is less homogenous in terms of hormonal effects on CVD, particularly in their reproductive years, so far, it has been delicate to perform a gender-balanced study for CVD [2]. Such claims are justified by the difference in physiology and pharmacokinetics, and pharmacodynamics in females versus males. The recent study by Reckelhoff stressed that hypertension awareness is greater in women, while hypertension itself is more common in men than in women in the reproductive period. Also, an important point is that there are different mechanisms responsible for blood pressure control between the male and female genders [3]. In previous studies on population genetic level, the difference between genders with spina bifida was established, contributing to better understanding of etiopathogenetic mechanisms [4,5].
Given the facts above, the presence of gender differences and possible genetic predisposition led us to hypothesize that increased genetic homozygosity and decreased variability in tested individuals of different genders with coronary artery disease (CAD) could be morphogenetic parameters for the prediction of such a state. Therefore, we aimed to analyze and compare morphogenetic variability and the degree of genetic homozygosity in male and female individuals with CAD versus unaffected controls.

We have tested 235 CAD patients between 2015 and 2017, of which 109 were also diagnosed with diabetes mellitus (DM), and 126 that were also diagnosed with hypertension (HTN).
For comparison, we additionally evaluated 152 healthy individuals without manifested CAD. The tested individuals with CAD and the control group belong to the same population (Serbian population) of similar socioeconomic status and age (between 56–65 years). The study was conducted according to the principles of good clinical practice and followed the recommendations of the declaration of Helsinki. The study was approved by relevant Institutional Review Board. According to gender, all tested individuals were divided into two groups: male and female.
Prior to inclusion in the study, patients were informed about study protocol and informed consent was obtained.
Hypertension was defined as a systolic blood pressure (SBP) ≥ 140 mm Hg or a diastolic blood pressure (DBP) ≥ 90 mm Hg [6]. Diabetes mellitus was defined as a fasting plasma glucose level (FPG) ≥ 7.0 mmol/L or random plasma glucose level ≥ 11.1 mmol/L [7].

For the evaluation of the degree of recessive homozygosity, we have performed the homozygously recessive characteristics (HRC) test, which is used to establish the proportion of homozygously recessive clearly expressed characteristics in every individual as markers of chromosomal homozygosities, implicating the degree of genetic homozygosity in humans [8,9,10]. HRC testing is based on an analysis of numerous morphophysiological traits with a known genetic determination. These evaluated homozygous traits are controlled by genes found on different chromosomes and can be treated as markers of the same chromosomes, including surrounding genes that control different elements of fitness. The degree of homozygosity established by the HRC test basically represents an estimate of genetic loads present in a certain group of the human population being tested or the human population in general [11,12,13].
We have evaluated 19 HRCs in every studied individual, where only characteristics with extreme appearance were marked as a present trait: attached ear lobe (OMIM number 128900), continuous frontal hair line (OMIM number 194000), blue eyes (gene location 15q12, 15q13, OMIM number 227220; 5p13 OMIM number 227240; 14q32.1, OMIM number 210750; 9q23 OMIM number 612271), straight hair (1q21.3, OMIM number 139450), soft hair and blond hair (gene location 15q12, 15q13, OMIM number 227220; 14q32.1, OMIM number 210750; 12q21.3 OMIM number 611664; 11q13.3, OMIM number 612267), double hair whorl, opposite hair whorl orientation (OMIM number 139400), as well as an inability to roll, fold, and curve the tongue (OMIM number 189300), ear without Darwinian notch, and a guttural “r” in speech, proximal thumb hyperextensibility, index finger longer than the ring finger (OMIM number 136100), left-handedness (gene location 2p12-q22, OMIM number 139900), right thumb over left thumb (hand clasping) (OMIM number 139800), top joint of the thumb > 45°, and three tendons in the wrist (OMIM) [14].

The results were presented as whole numbers and percentages, while continuous variables were presented as mean value ± standard deviation and 95% confidence interval (CI). For comparison among groups, we performed the Mann–Whitney U Test. Variation coefficient (V) was used to compare variability between the evaluated groups of individuals. We used SPSS version 17.0 for statistical evaluation. Statistical significance was set as p < 0.05.

The study was supported by Ministry of Education, Science and Technological Development of Serbia (175093). 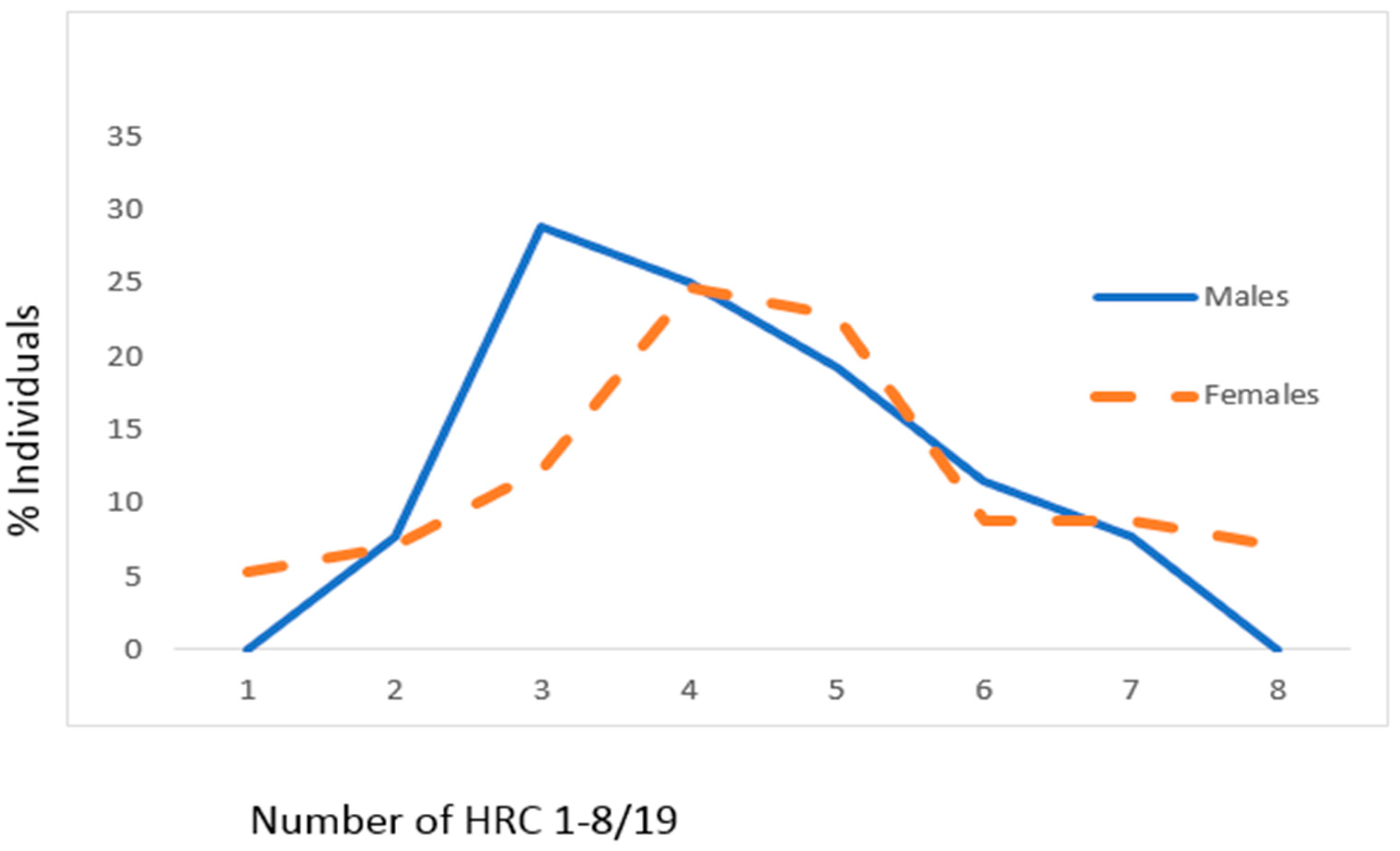 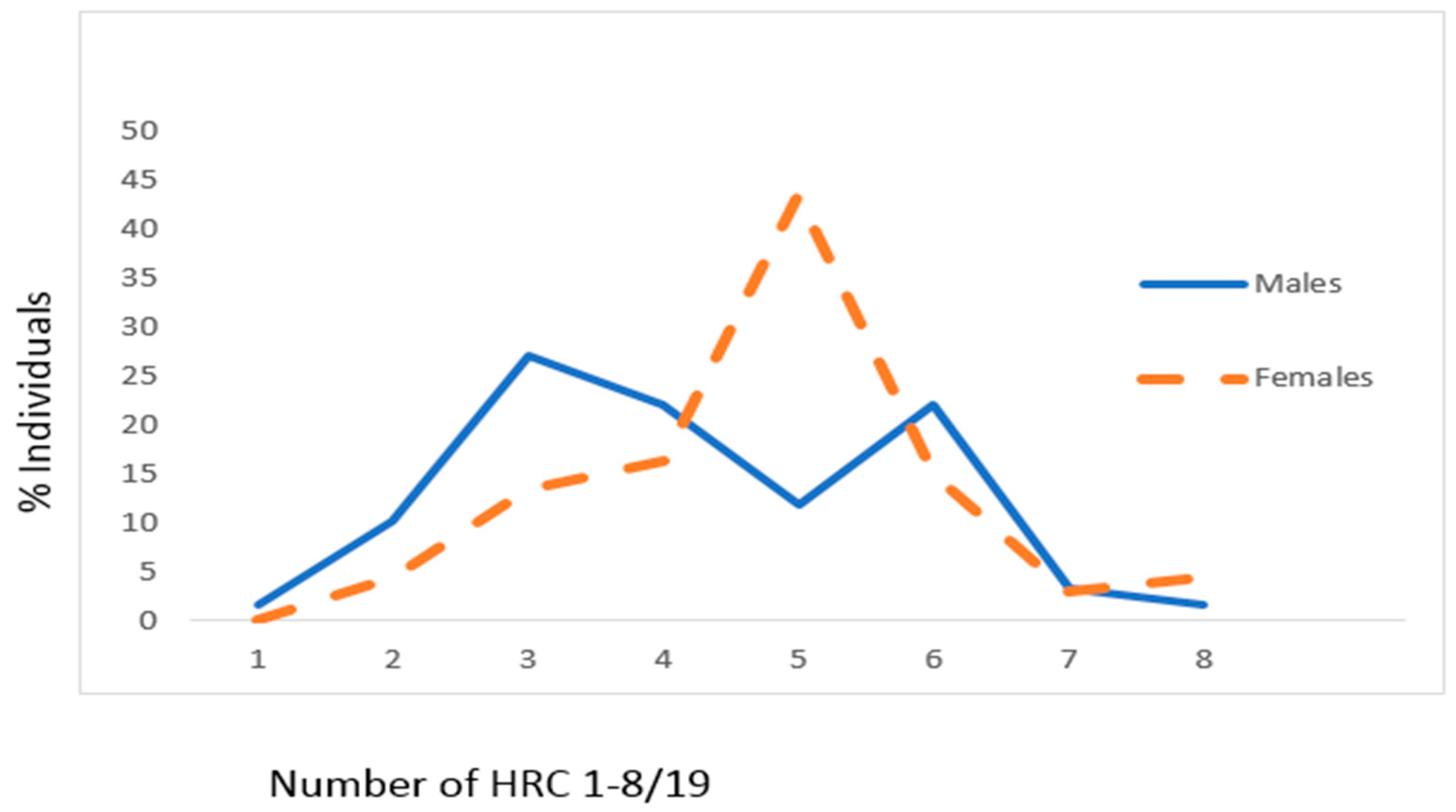