Neoadjuvant chemotherapy (NCT) is a generally accepted and worldwide standardized treatment for patients with locally advanced or large operable (stage II–III) breast cancer [1]. NCT is as effective as adjuvant chemotherapy following local treatment in terms of (recurrence-free) survival [2]. Besides the opportunity to study changes in tumor biology and response, NCT has the capability of downstaging breast tumors, facilitating in breast conserving surgery. The antitumor effect of adding bisphosphonates (BPs) to (neo)adjuvant chemotherapy for breast cancer is still under debate. There is emerging preclinical evidence for a synergistic effect of the most potent BP, zoledronic acid, in combination with chemotherapy, when administered after chemotherapy [3]. Clinical results suggest that BPs might improve treatment efficacy in patients with breast cancer [4,5]. Clinically, menopausal and/or hormonal status seem to play a role. The neoadjuvant model is ideal for gaining insight into the biological antitumor mechanisms of BPs in combination with NCT and can aid in defining predictors of response for this treatment strategy. Here, we provide a comprehensive review of preclinical and clinical evidence for the antitumor effects of BPs and a rationale for possible efficacy of BPs in the neoadjuvant setting.

BPs are pyrophosphates and can be divided into two subgroups based on the structure of the R2 side chain: non-nitrogen containing BPs (e.g., clodronate), and the more potent nitrogen-containing BPs (e.g., zolendronic acid, alendronate, ibandronate, risedronate), which are widely used in the clinical setting [6]. Zoledronic acid is currently the most potent available BP containing two nitrogen atoms [7,8,9].
As all pyrophosphates, BPs easily bind to the bone mineral with the P–C–P chain at locations showing a high level of bone resorption. BPs inhibit the breakdown of hydroxyapatite, thereby suppressing bone resorption and promoting osteoclast apoptosis [10]. Nitrogen-containing BPs bind to and inhibit farnesyl pyrophosphate synthase (FPPS), which is an important regulatory enzyme of the mevalonate pathway (Figure 1), and which is responsible for the production of lipids needed for the posttranslational modification (prenylation) of proteins and activation of intracellular signaling proteins [11,12,13]. These signaling proteins are essential for cell functioning and survival, and osteoclast apoptosis is induced by inhibiting the posttranslational modification of proteins with isoprenyl [13]. Furthermore, nitrogen-containing BPs induce the production of an adenosine triphosphate analogue (Apppi) that can directly induce apoptosis [14]. In addition, bisphosphonates have been found to inhibit both osteoblast and osteocyte apoptosis [15].
BPs have a well-established role in the prevention and treatment of osteoporosis and in the treatment of bone metastases, causing a reduction in pain, hypercalcemia of malignancy and skeletal related events (SRE), such as pain, pathological fractures, and spinal cord compression. These SREs are a major cause of morbidity and a reduced quality of life [7]. In addition to their use in treating osteoporosis and bone metastases, bisphosphonates are gaining recognition for the management of breast cancer through various mechanisms, and their use has grown rapidly in recent years. Needless to say, the mechanisms by which BPs prevent and decrease tumor burden in bone is currently still speculative and under investigation.

There is ample evidence to suggest that the mechanism of bone metastases is multifaceted, comprising both bone resorption and bone formation aided by osteoblast and osteoclast activity [16]. In breast cancer, bone metastases are generally characterized by a predominantly osteoclastic activity, with osteolysis the result of osteoclast stimulation. In response, there is some degree of bone formation or bone repair, caused by osteoblasts [16]. 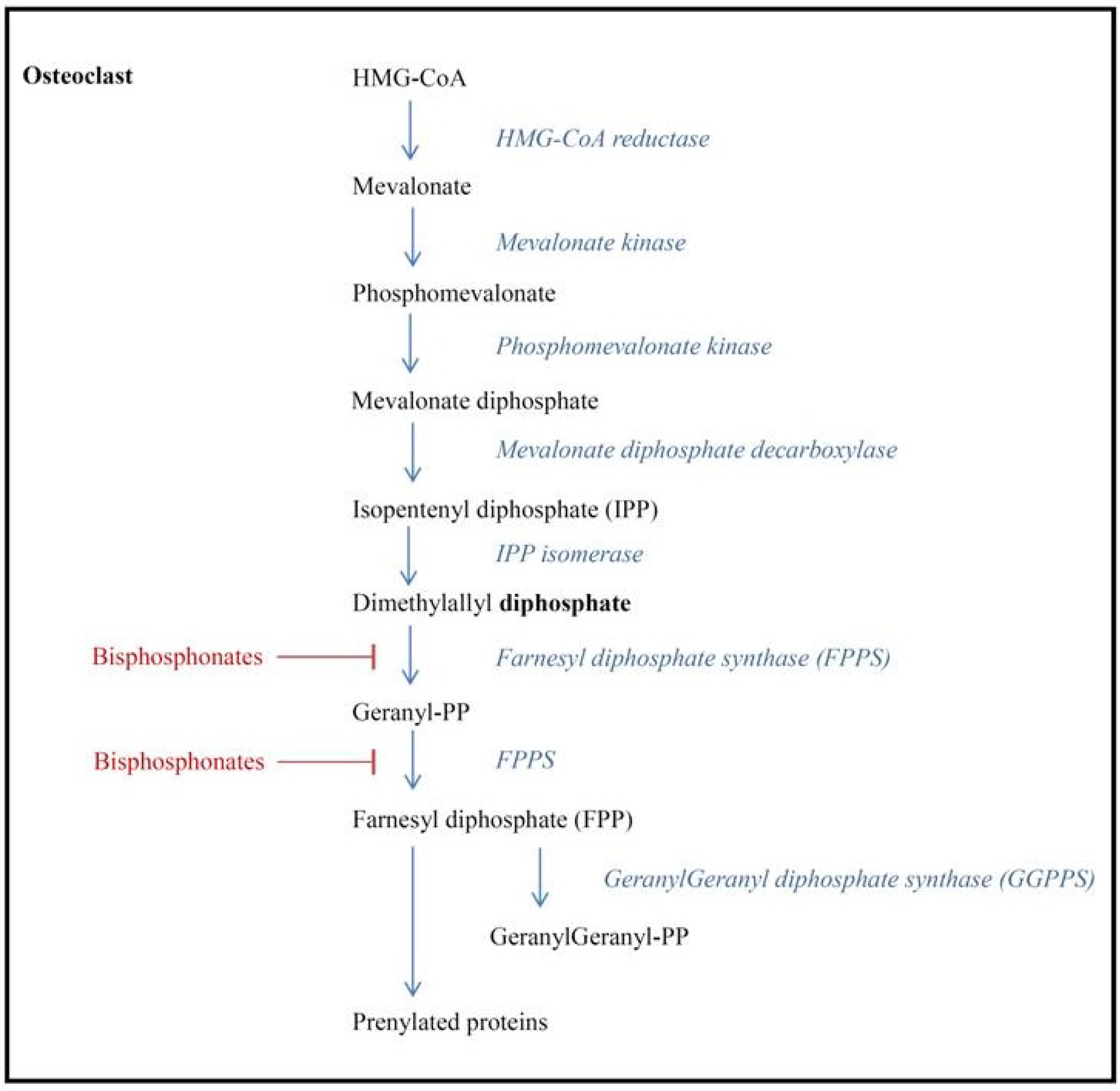 Cancer cells produce a range of growth factors and cytokines that increase osteoclast activity [17]. Tumor production of factors including parathyroid hormone (PTH), PTH-related peptide (PTHrP) and interleukins (IL)-1, IL-6 and IL-11 stimulate the production of the cytokine, receptor activator of nuclear factor-KB ligand (RANKL), by osteoblasts and stromal cells. Following stimulation by PTHrP, RANKL induces osteoclast activity. PTHrP also causes a decrease in the production of osteoprotegrin (OPG), a receptor that prevents RANKL from binding to its receptor (RANK) on osteoclast progenitor cells, thereby blocking bone resorption [16].
During bone resorption, other potentially tumor-stimulating growth factors such as transforming growth factorbeta (TGF-beta) and insulin-like growth-factor-1 are released by osteoblasts, facilitating tumor cell growth and proliferation, and attracting other tumor cells [17]. BPs may reduce tumor burden and growth by inhibiting this bone turnover. BPs do this, both directly, through the apoptosis of osteoclasts and tumor cells, and indirectly, through alterations in the bone microenvironment (Figure 2). Direct effects include the metabolism of non-nitrogen-containing BPs to an adenosine triphosphate analog that is toxic for macrophages and osteoclasts [14]. Nitrogen-containing BPs also work through several indirect mechanisms. For example, BPs may render the bone microenvironment less favorable for tumor cell growth. Namely, in case of skeletal metastases, a balanced coupling of osteoblastic bone formation and osteoclastic bone resorption is lost [18]. BPs can interrupt this vicious cycle of osteolytic bone loss.
In addition, BPs inhibit angiogenesis, as demonstrated in one study, where zoledronic acid was found to reduce circulating levels of vascular endothelial growth factor (VEGF) after the first infusion in patients with metastatic bone disease [19,20]. Lastly, and most importantly in the neoadjuvant setting, BPs may reduce tumor burden by indirectly modulating the immune system. For example, BPs enhance cellular antitumor toxicity by attracting and triggering expression of γ/δ T-cells, which could be an important factor in antigen specificity and the ability to recognize and kill tumor cells [21,22,23]. Furthermore, bisphosphonates are suggested to differentiate monocytes into tumoricidal M1 macrophages [24]. 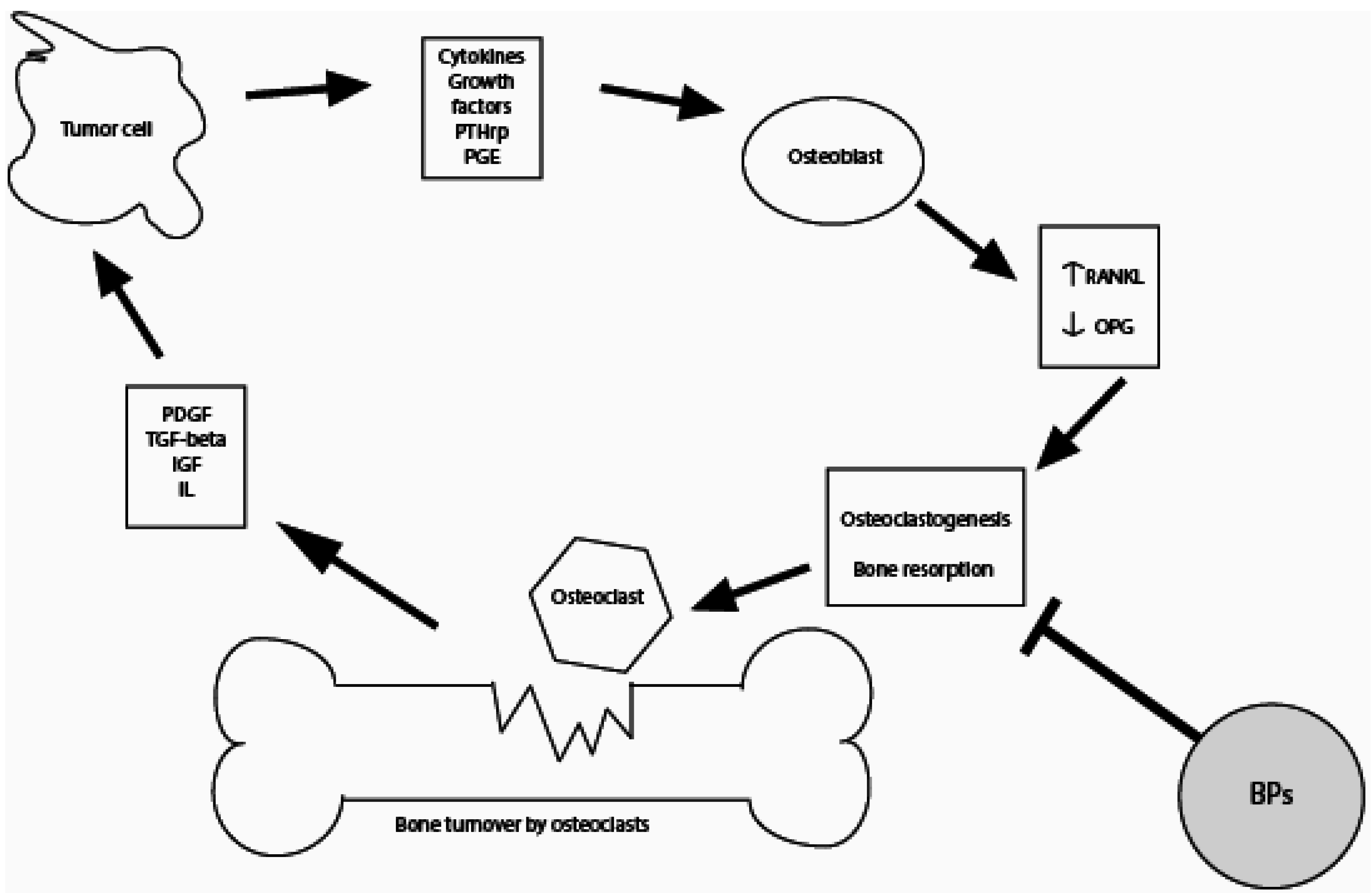 Tumor cells produce cytokines and growth factors which stimulate osteoclastogenesis, inducing an increase in bone resorption and the release of growth factors from the bone matrix. These factors stimulate proliferation, migration and angiogenesis of tumor cells. Bisphosphonates can break this vicious circle by inhibiting osteoclastogenesis and bone resorption. PTHrp = parathormone-related protein; PGE = prostaglandin E; RANKL = receptor activator of nuclear factor κβ ligand; OPG = osteoprotegerin; PDGF = platelet derived growth factor; IGF = insulin-like growth factor; IL = interleukin.
Needless to say, there is still a need for more translational research giving insight into the alleged anti-tumor effect of bisphosphonates, and further investigations on the role of BPs are most certainly warranted. The neoadjuvant setting provides a suitable platform for this kind of research.

Of particular interest is the potential for BPs to enhance the anti-tumor activity of cytotoxic agents in the context of (neo)adjuvant chemotherapy. In vitro data have shown that clinically relevant concentrations of doxorubicin followed by zoledronic acid consistently induced sequence-dependent synergistic apoptosis of cancer cells across several malignant cell lines [25]. However, the drugs alone, in the reverse sequence, and even given synchronously, had little or no effect on apoptosis [21]. In a mouse model, sequence-dependent synergy between doxorubicin and zoledronic acid was observed with complete inhibition of tumor growth associated with enhanced apoptosis and reduced proliferation and angiogenesis. These effects were statistically more pronounced when the zoledronic acid was administered 24 h after chemotherapy, suggesting that an initial priming of tumor cells by doxorubicin renders them more sensitive to subsequent exposure to zoledronic acid [26]. Possible molecular pathways by which sequential treatment with zoledronic acid and doxorubicin induce tumor cell apoptosis and inhibit proliferation were also shown in an in vivo model of breast tumor growth in the bone [27]. Interestingly, zoledronic acid specifically inhibited the development of bone metastases in an ovariectomy-induced/postmenopausal mouse model [28].

Following previous discordant data with the less potent bisphosphonate, clodronate, in the adjuvant setting [29,30,31,32], the Austrian Breast Cancer Study Group-12 trial was the first adjuvant clinical trial to notice an improvement in disease-free survival (DFS), a reduction in distant (non-bone) metastases, locoregional and contralateral relapses, as well as a trend to reduced risk of death, with zoledronic acid (4 mg intraveneously every 6 months for 3 years) added to endocrine treatment with ovarian suppression in premenopausal breast cancer patients [33,34]. The protective effect of zoledronic acid persisted even after a median follow-up of 76 months, with zoledronic-acid-treated patients having a significant reduction in the risk of DFS events (27%) and a significant reduction in the risk of death (41%) when compared with controls [35]. Of note, all patients received goserelin, and were therefore postmenopausal, from an endocrionlogical viewpoint. This has probably contributed largely to the significant benefit of zoledronic acid in these patients.
Three other similarly designed trials investigated the effect of delayed vs. upfront zoledronic acid on bone mineral density in postmenopausal breast cancer patients, with disease recurrence as a secondary endpoint (Z-FAST, E-ZO-FAST and ZO-FAST) [36,37,38]. Fewer DFS events with upfront zoledronic acid were only observed in the ZO-FAST study (37% RR, p = 0.05). Based on exploratory analyses, initiating zoledronic acid may have significant DFS benefits. In the AZURE trial, patients were randomized to standard therapy (any (neo)adjuvant chemotherapy and/or endocrine therapy), with or without zoledronic acid during 3 years. At a median follow-up of 59 months, no significant differences in DFS were found in the complete study population [39]. However, when concentrating on the subset of postmenopausal women, a statistically significant difference in DFS was found between the treatment groups (HR 0.74, p = 0.04). These results in postmenopausal women are consistent with the findings in premenopausal women in ABSCG-12 trial, suggesting that efficacy of zoledronic acid treatment is dependent on menopausal status and/or hormonal levels. Recently, this was confirmed in a meta-analysis of phase III studies by Yan et al. in which treatment with zoledronic acid did not improve DFS in breast cancer patients [5]. However, in the postmenopausal group, a significant benefit in terms of DFS (RR 0.75) distant (RR 0.74) and locoregional recurrence (RR 0.51), was found. Different results were found in a meta-analysis by Valachis et al. in which phase II studies were also included [4]. In this study, in which no specific analyses for postmenopausal women were done, zoledronic acid use resulted in a significantly better OS (HR 0.81) in patients with early-stage breast cancer, strengthening the argument for an antitumor effect of zoledronic acid.

6. The Future of Bisphosphonates and Neoadjuvant Therapy

Table 1. Summary of neoadjuvant studies with chemotherapy in combination with zoledronic acid *.
* Data obtained from [47].

In summary, there are several features of bisphosphonates which can contribute to an anti-tumor effect and can inhibit tumor growth. This given in combination with still sparse preclinical and clinical evidence for a benefit of neoadjuvant treatment, helps warranting clinical and translational research into this field. In the next few years response results and long-term outcome results of several neoadjuvant chemotherapy trials are expected. Translational research is represented in most of these trials. Hopefully, clinical and translational results will provide more answers to the question whether zoledronic acid in combination with chemotherapy can enhance tumor response.