The Treatment of Verrucae Pedis Using Falknor’s Needling Method: A Review of 46 Cases

Human Papilloma Virus (HPV) related verrucae pedis persist, seemingly evading host immune surveillance, yet sometimes disappear with inflammation. The absence, or reduction, of a cellular immune response may explain why verrucae treatments are not uniformly successful and treatment can be difficult even in immune-competent individuals. Little investigation has been undertaken into the potential benefit and efficacy of needling verrucae, a treatment modality causing HPV infected keratinocyte destruction in addition to inducing an assumed enhanced immune response. A review of clinical practice is presented, reporting the treatment method and results of data collected from a retrospective review of 45 patients. Thirty-one (69%) cases demonstrated complete resolution of verrucae following needling treatment. Three patients demonstrated reduction in size and pain whilst 11 showed no improvement. No adverse events were noted. Needling may have a place in the management of verrucae pedis in an adult population but a large scale study utilising objective measures and a control intervention would provide more detailed efficacy data along with a greater understanding of the effects of this treatment on long term immunity.
Keywords: wart; verrucae; HPV; foot; plantar; virus; infection wart; verrucae; HPV; foot; plantar; virus; infection

Ethical approval was sought through the National Research Ethics Service for this study. Each patient presented with clinically diagnosed verruca pedis. Treatment was indicated where the patient reported associated pain with the verrucae and subsequent interference with daily activities. However, a minority also requested clinical intervention as they perceived their quality of life was compromised due to cosmetic embarrassment. All treatment options, including no treatment, and the risks and benefits were explicitly explained to each patient. Those opting for needling treatment were enrolled into the study. Informed, signed consent was given by all patients prior to the needling procedure.
Data from each patient was collected at baseline (prior to the procedure), one week post-operatively and at their final review to ascertain the following:

Local anaesthetic (Mepivacaine® 3%) was administered by tibial nerve block, digital block or local infiltration according to the location of the lesion chosen for needling. Once the area of skin was anaesthetised, any overlying callus was debrided. If the patient presented with mosaic or multiple plantar warts the largest and thickest lesion was selected for treatment. All treatments were undertaken by a single operator (BL).
The area surrounding the lesion was first cleansed with povidone-iodine before an empty 27 gauge needle was utilised to puncture through the lesion to the subcutaneous tissue (Figure 1). Each puncture produced pin point bleeding and this was continued until there was no more resistance, or reactive pressure, from the epidermis and the entire lesion was perforated enough to produce a beefy red wound (Figure 2). The total number of punctures varied according to the size of the lesion. 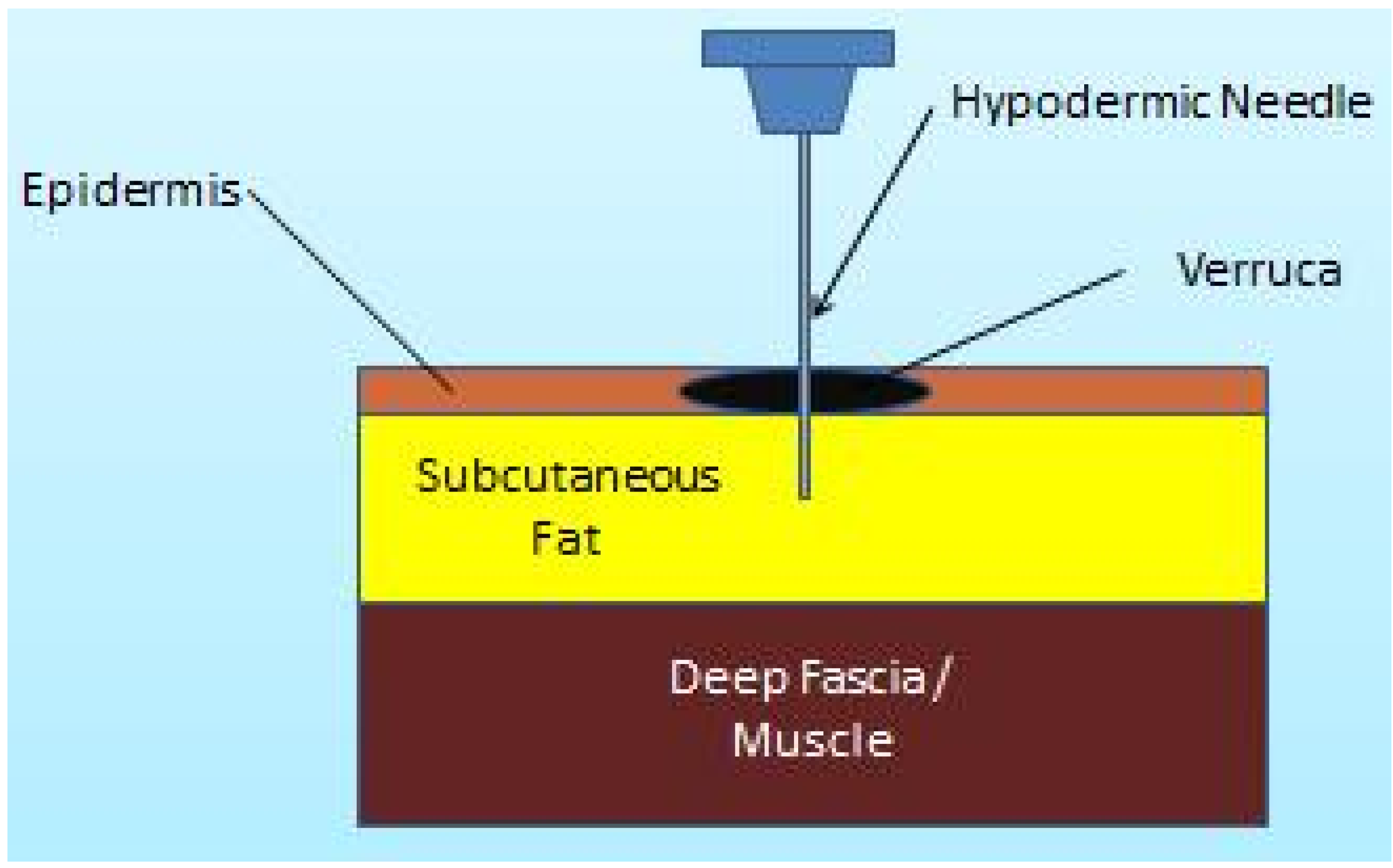 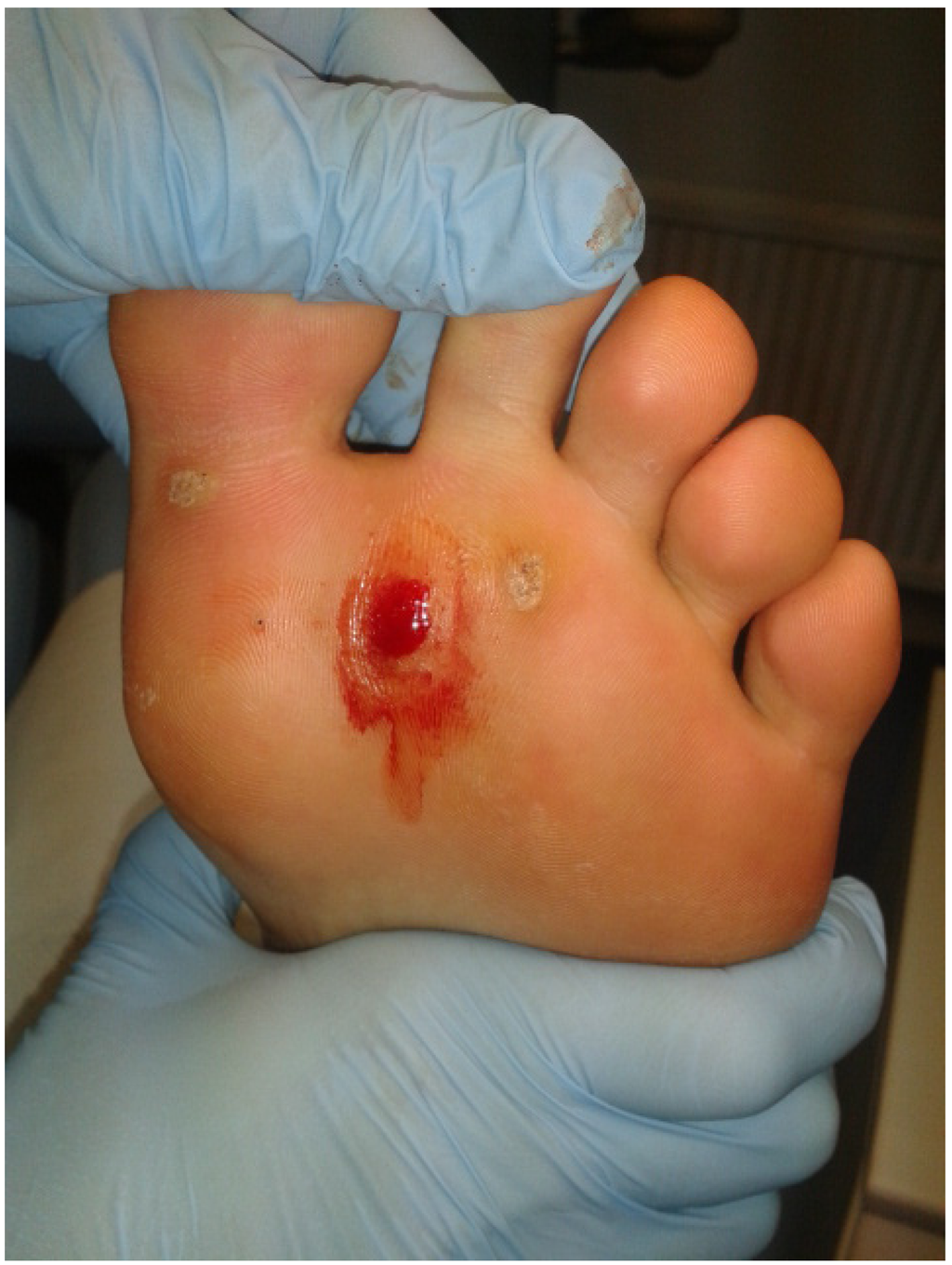 Pressure was then applied to the wound with sterile gauze and then dressed with a non-adherent sterile dressing (Melolin®) and fixing tape (Mefix®). A semi compressed felt aperture pad was also applied on weight bearing sites to deflect pressure and reduce post-operative bruising. Each patient was issued with post-operative care sheets and advised to lightly shower and wash the area after keeping the dressing dry for 24 h. Each patient was advised to avoid taking NSAIDs or other anti-inflammatory medication for 48 h to increase the likelihood of a successful controlled inflammatory response. Wound inspection and debridement of any uncomfortable eschar was performed one week later. The final inspection for verrucae resolution was carried out 8 weeks later. Complete resolution was deemed accomplished on return of normal dermatoglyphics to the treated lesion, i.e., uninterrupted skin striae and no pain on lateral compression of the area. Figure 3a–c demonstrate a lesion before, immediately after and six weeks following treatment. 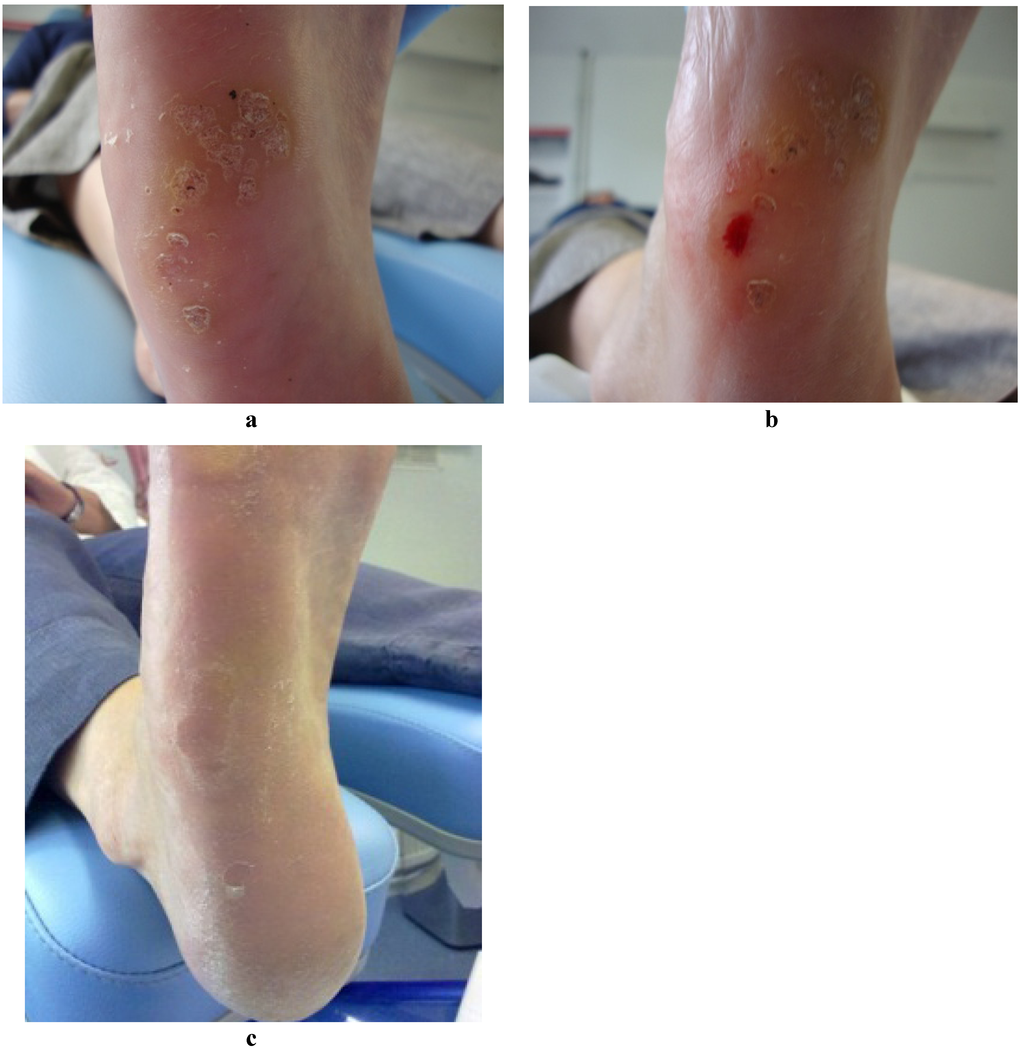 A total of 46 patients (13 male, 33 female) underwent a standardised needling procedure. The mean age of the cohort was 41.8 years ± SD 12.65 (range 17–66 years). The average patient reported duration of the warts was 5.7 years ± SD 4.15 (range 1–20 years). The locations of all the treated lesions are given in Table 1. A total of 45 patients were available for review at eight weeks post-operatively with one patient lost to follow up.

Table 1. Location of primary (treated) lesions.
Of 45 patients, 69% (21 female and 10 male) demonstrated a complete resolution of verrucae (10 patients with single lesions, 8 with mosaic and 13 with multiple types). There was no significant difference in the cure rates between males and females (p = 0.463). Table 2 profiles previous treatments of the resolved and unresolved lesions. Of the 45 patients, 7 (2 single lesions, 2 mosaic lesions and 3 multiple lesions) opted for a second needling treatment as the initial treatment did not fully rid all lesions.

Table 2. Previous treatment profile of resolved (R) and unresolved (U) lesions (n = 45).
Lesions from 14 patients (31%) failed to resolve. There was no difference in the mean duration of resolved versus unresolved lesions (mean duration unresolved 7.67 years ± SD 13.26 versus mean resolved 6.68 years ± SD 4.41 (p = 0.7571). Three of the patients with unresolved lesions (7%) reported significant reduction of verrucae size and subsequent pain, signifying a clinical improvement. All treated patients reported their pain level after needling as either “none” (n = 29 [64%]) or “mild” (n = 16 [36%]) describing mild symptoms such as “bruising” or “slight discomfort”. No post-operative infection or scarring was evident on examination or reported by patients post-operatively.

This paper represents the largest case series published to date using Falknor’s method since his original paper was published in 1969. The selection of patients from an adult population with a broad age range (17–66 years) has reduced the possibility of spontaneous regression often observed in child population based studies of this kind. The resolution rate following a maximum of two treatments (69%) indicates a good response when compared to other modalities. Using a similar approach of exposing wart virus to the immune system, Nischal et al. [17] auto-implanted debrided wart tissue from sufferers’ feet and implanted into the sub-cutis of the patients forearm or thigh. Analysis of the 27 subjects demonstrated a similar 74% clearance of lesions within three months.
The observed positive clinical outcomes, in this current review, suggest that the hypothesis; provocation of a cell-mediated response as the cause of verrucae regression, is a viable premise. Needling just one lesion often produced a “cascade” effect, whereby the remaining untreated lesions also resolved in a number of patients. Thus, it can be suggested that introducing already HPV infected keratinocytes into the subcutaneous layer appears to facilitate a desired immune response in some patients.
Currently the practice of needling verrucae is not extensively practiced. This may be due to many factors, including lack of published research, preference to utilise traditional and established treatments, (such as salicylic acid and cryotherapy) or simply because many practitioners require update in anaesthesic skills for ankle block infiltration.
Although the short review period of eight weeks post-operatively, potentially does not rule out completely the possibility of reinfection or recurrence, longer term follow up is required. The authors acknowledge that this is small case series and cannot imply effectiveness and any placebo action inherent cannot be fully determined. However, a larger scale investigation, with objective measures using a control intervention, over a longer period of time would provide a more detailed picture of efficacy and long term immunity of the needling technique.

Currently, there is no consistently effective treatment for plantar warts. This case series has reviewed the potential for the use of a direct needling technique in the management of plantar warts in an adult population. Following treatment of 45 patients, complete resolution of warts after eight weeks was observed in 31 (69%) cases. This represents a relatively small case series, within a restricted clinical setting. However, a larger scale investigation, with objective measures using a control intervention would provide a more detailed picture of efficacy and long term immunity of this promising technique.

The authors would like to acknowledge the assistance of Kevin Kirby DPM for describing the needling technique.