Efficacy of Acupuncture on Quality of Life, Functional Performance, Dyspnea, and Pulmonary Function in Patients with Chronic Obstructive Pulmonary Disease: Protocol for a Randomized Clinical Trial

The purpose of this study was to investigate the changes in anterior knee laxity (AKL), stiffness, general joint laxity (GJL), and genu recurvatum (GR) during the menstrual cycle in female non-athletes and female athletes with normal and irregular menstrual cycles. Participants were 19 female non-athletes (eumenorrhea, n = 11; oligomenorrhea, n = 8) and 15 female athletes (eumenorrhea, n = 8; oligomenorrhea, n = 7). AKL was measured as the amount of anterior tibial displacement at 67 N–133 N. Stiffness was calculated as change in (Δ)force/Δ anterior displacement. The Beighton method was used to evaluate the GJL. The GR was measured as the maximum angle of passive knee joint extension. AKL, stiffness, GJL, and GR were measured twice in four phases during the menstrual cycle. Stiffness was significantly higher in oligomenorrhea groups than in eumenorrhea groups, although no significant differences between menstrual cycle phases were evident in female non-athletes. GR was significantly higher in the late follicular, ovulation, and luteal phases than in the early follicular phase, although no significant differences between groups were seen in female athletes. Estradiol may affect the stiffness of the periarticular muscles in the knee, suggesting that GR in female athletes may change during the menstrual cycle. View Full-Text
Keywords: anterior knee laxity; stiffness; general joint laxity; genu recurvatum anterior knee laxity; stiffness; general joint laxity; genu recurvatum
►▼ Show Figures 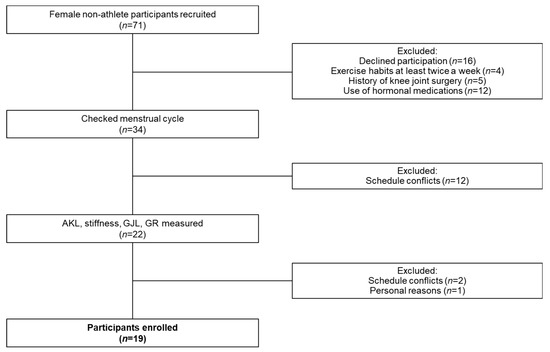