Trend and Geographic Disparities in the Mortality Rates of Primary Systemic Vasculitis in the United States from 1999 to 2019: A Population-Based Study 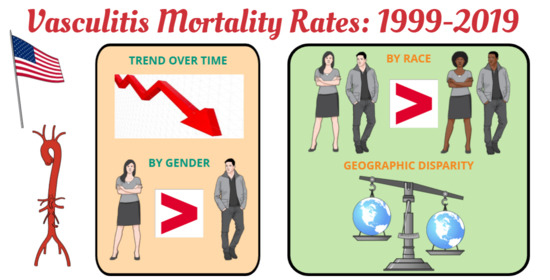 Primary systemic vasculitides are a group of heterogeneous disorders characterized by inflammation of the vessel wall. According to the 2012 International Chapel Hill Consensus Conference on the Nomenclature of Vasculitides, vasculitides are classified by the size of the vessel primarily involved in large-, medium-, and small-vessel vasculitis [1]. Large-vessel vasculitis primarily affects the aorta and supra-aortic branches. Giant cell arteritis (GCA) and Takayasu arteritis (TAK) are the two major variants of large-vessel vasculitis. Medium-vessel vasculitis primarily affects the main visceral arteries and their branches. Polyarteritis nodosa (PAN) and Kawasaki disease are the major variants. Small-vessel vasculitis predominantly affects the intraparenchymal arteries, arterioles, capillaries, and venules. The two major categories of small-vessel vasculitis are the subgroup of antineutrophil cytoplasm antibody (ANCA)-associated vasculitis (AAV), which includes granulomatosis with polyangiitis (GPA), eosinophilic granulomatosis with polyangiitis (EGPA), and microscopic polyangiitis (MPA), and the immune complex small-vessel vasculitis, which includes antiglomerular basement membrane (anti-GBM) disease, cryoglobulinemic vasculitis, IgA vasculitis (IgAV) and hypocomplementemic urticarial vasculitis. Additional categories are variable vessel vasculitis, which includes Behcet’s disease, single-organ vasculitis, and vasculitis associated with systemic disease or probable etiology [1].
Earlier diagnosis and less toxic immunosuppressive therapies have improved the survival of patients with vasculitis. Without treatment, primary systemic vasculitis is associated with high mortality rates, especially in patients with AAV, a subtype of small-vessel vasculitis [2] that includes GPA, EGPA, and MPA, as mentioned above [1]. Before treatment with corticosteroids and cytotoxic agents, patients with GPA had a one-year mortality rate between 50% and 80% [3]. During the 1960s, the prognosis improved with the use of cytotoxic agents [4]. In the 1970s, combination therapy with cyclophosphamide plus high-dose steroids for three to six months, followed by less toxic regimens with azathioprine and low-dose steroids, achieved an 80–90% survival rate for AAV [5,6]. It is unknown if regimens with rituximab have further improved the survival for AAV [7].
In medium-vessel vasculitis, better hepatitis B infection treatments have improved the outcomes of PAN [8]. Increased awareness and earlier diagnosis of Kawasaki disease have resulted in earlier treatment and better outcomes and survival [9]. Increased awareness of the need for a more aggressive course in some patients with large-vessel vasculitis with a higher risk of aneurysm formation and ischemic complications [10,11] may have decreased the morbidity and mortality of GCA. It is unknown if interleukin (IL)-6 inhibition has impacted mortality in GCA [12].
The geographic distribution of mortality in different diseases, including stroke [11], heart disease [13], and scleroderma [14], has been reported in epidemiological studies. Environmental factors, sociodemographic characteristics, lifestyle variables, and access to care have been postulated to be important contributors [11].
The current data on the mortality rates of vasculitis and their geographic distribution are limited. In this study, we aimed to estimate the mortality rates and the geographic distribution of the mortality of primary systemic vasculitis using the most recent available population mortality data in the United States. We found a trend of a progressive decrease in the mortality rates of vasculitis, as well as gender, racial, and geographic disparities.

We used the Center for Disease Control (CDC) Wonder database and its query system to obtain the mortality rates of vasculitis as multiple cause of death (MCD) [15] or as the underlying cause of death (UCD) [16] from 1999 to 2019.
The mortality data were based on the information included in all death certificates filed in the 50 states and the District of Columbia. Fetal deaths and deaths of nonresidents and residents of other U.S. territories were excluded. The causes of death were classified in accordance with the International Classification of Disease (ICD). Deaths for 1999 and beyond were classified using the Tenth Revision (ICD-10) [15].
The MCD data available in the CDC Wonder database are country-level national mortality and population data from 1999 to 2019. Each death certificate identifies a single UCD, plus up to 19 additional causes and demographic data. The World Health Organization (WHO) defined a UCD as “the disease or injury which initiated the train of events leading directly to death, or the circumstances of the accident or violence which produced the fatal injury.” The UCD is selected from the conditions entered by the physician in the cause of death section of the death certificate. When more than one cause is entered, it is determined by the sequence of conditions on the certificate, the provision of the ICD, and the associated selection rules and modifications [15]. When one of the primary vasculitides is listed as the UCD, it means that vasculitis was the disease that initiated the event leading directly to death. When one of the primary vasculitides is considered a contributing cause, but not the UCD, it is listed among the 19 additional causes of death on the certificate. The patients can be represented more than once in the MCD statistics if they have more than one vasculitis.
As stated on the CDC Wonder website, race and Hispanic origin are reported separately on the death certificate. The American Indian or Alaska Native race category includes North, Central, and South American Indians, Eskimos, and Aleuts. The Asian or Pacific Islander race category includes Chinese, Filipino, Hawaiian, Japanese, and Other Asian or Pacific Islanders. As Hispanic origin is not reported on the death certificate for some deaths, missing Hispanic origin information is coded as “not stated” and these deaths are excluded when death rates are calculated based on Hispanic origin [15].
To query the CDC Wonder database, we used the following ICD-10 codes: D69.0 (allergic purpura) for IgAV (Henoch–Schönlein), D89.1 (cryoglobulinemia) for cryoglobulinemia, M30.0 (polyarteritis nodosa) for PAN, M30.1 (polyarteritis with lung involvement (Churg–Strauss)) for EGPA, M30.2 (juvenile polyarteritis) for juvenile polyarteritis, M30.3 (mucocutaneous lymph node syndrome (Kawasaki)) for Kawasaki disease, M30.8 (other conditions related to PAN) for the same, M31.0 (hypersensitivity angiitis) for antiglomerular basement membrane (anti-GBM) disease, M31.3 (Wegener’s granulomatosis) for GPA, M31.4 (aortic arch syndrome (Takayasu)) for TAK, M31.5 (giant cell arteritis with polymyalgia rheumatica) for GCA with polymyalgia rheumatica (PMR), M31.6 (other giant-cell arteritis) for GCA, M31.7 (microscopic polyangiitis) for MPA, and M35.2 (Behcet’s disease) for Behcet’s disease.
Mortality rates were obtained by year, gender, race, ethnicity, state, and the urban–rural continuum according to the 2013 urbanization area classification. To obtain age-adjusted mortality rates, we used a U.S. standard population of year 2000. Mortality rates are given as number of deaths per million. A joinpoint regression analysis was used to calculate the average annual percent change from 1999 to 2019. This analysis is also able to identify changes in trends over time [17].

3.4. Mortality Rates by the Hispanic or Non-Hispanic or Latino Groups

3.5. Mortality Rates by Race and Gender

When analyzing the percent contribution of each vasculitis to mortality, we found that, as the UCD, GPA was the vasculitis responsible for half of the deaths, accounting for 50.18% of them, followed by GCA (13.97%) and anti-GBM disease (10.07%) (Table 2). The corresponding percentages for vasculitis as MCD were 36.85%, 32.64%, and 6.78%, respectively.
For the three vasculitides contributing the most to the MCD data, we analyzed the frequency of the UCD found on those death certificates. In GPA, GPA itself contributed 63.03% of all UCD, followed by atherosclerotic heart disease (2.29%), acute myocardial infarction (1.85%), and chronic obstructive pulmonary disease (1.54%). In GCA, GCA itself contributed 19.80%, followed by atherosclerotic heart disease (6.77%), stroke (5.54%), and acute myocardial infarction (5.15%). Finally, for anti-GBM disease, the disease itself contributed 68.69%, followed by acute myocardial infarction (1.20%), atherosclerotic heart disease (1.15%), and hypertensive renal disease with renal failure (1.0%).

3.8. Distribution of Vasculitis Mortality Rates According to the Urban–Rural Continuum

When looking at the distribution of vasculitis mortality according to the urban–rural continuum, there was a clear progressive decreasing trend of mortality rate as the size of the population increased both for vasculitis as MCD and as the UCD (Table 3).

There is a clear trend of a progressive decrease in the vasculitis mortality rates in the United States. Increased awareness of these rare diseases, leading to earlier diagnosis and treatment, less toxic therapeutic regimens, and better surveillance and prophylaxis of the long-term complications of both diseases and their treatments, have probably played a role in this progressive decrease in mortality rates. One of the advantages of this study is that the use of population data allowed us to make observations that would have otherwise been difficult to find in small studies, especially for rare diseases. An important contribution of our study is that it found gender, racial, and geographic disparities in the distribution of vasculitis mortality across states and across the urban–rural continuum in the United States.

Data are available in a publicly accessible database: CDC Wonder. 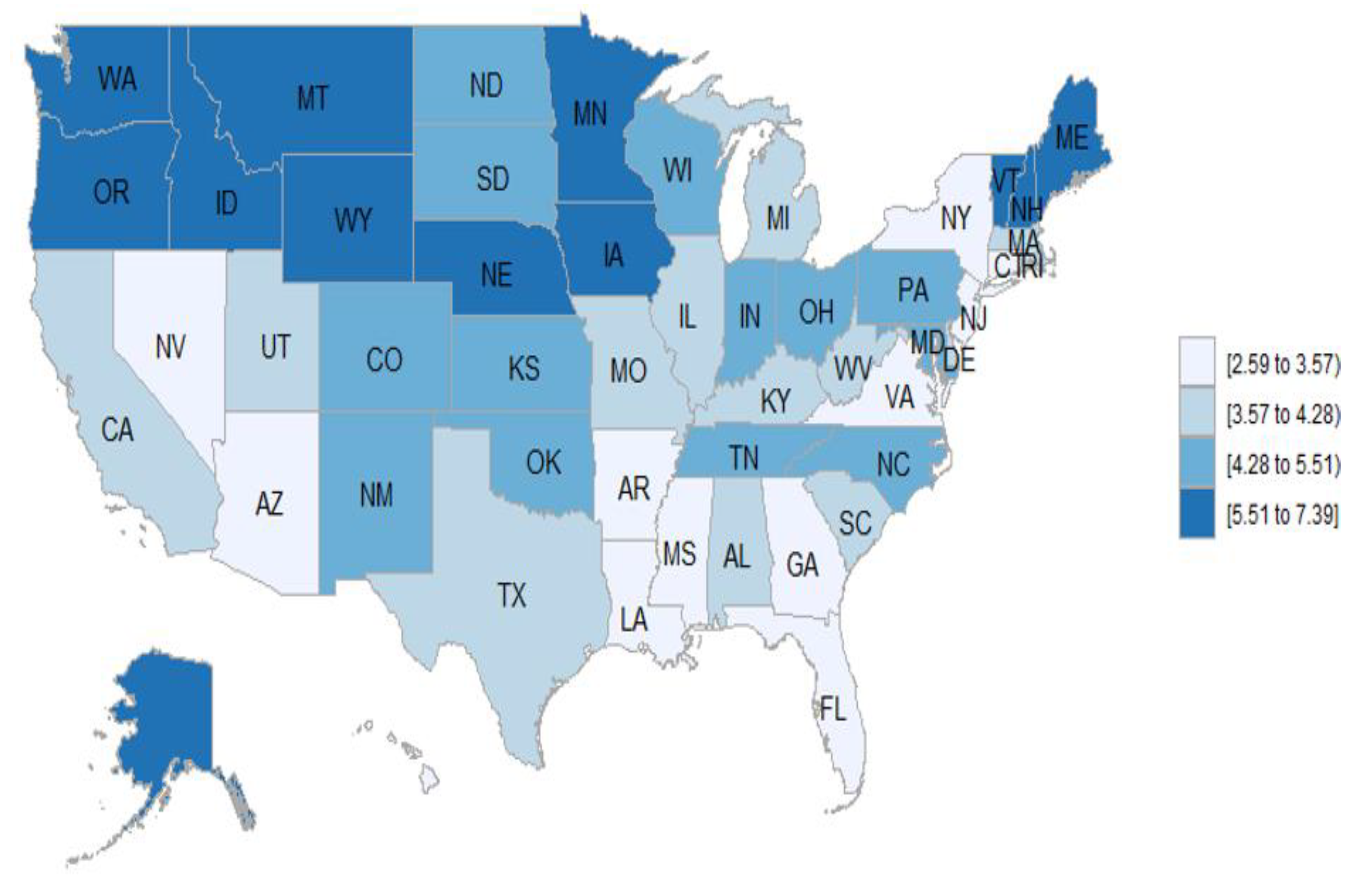 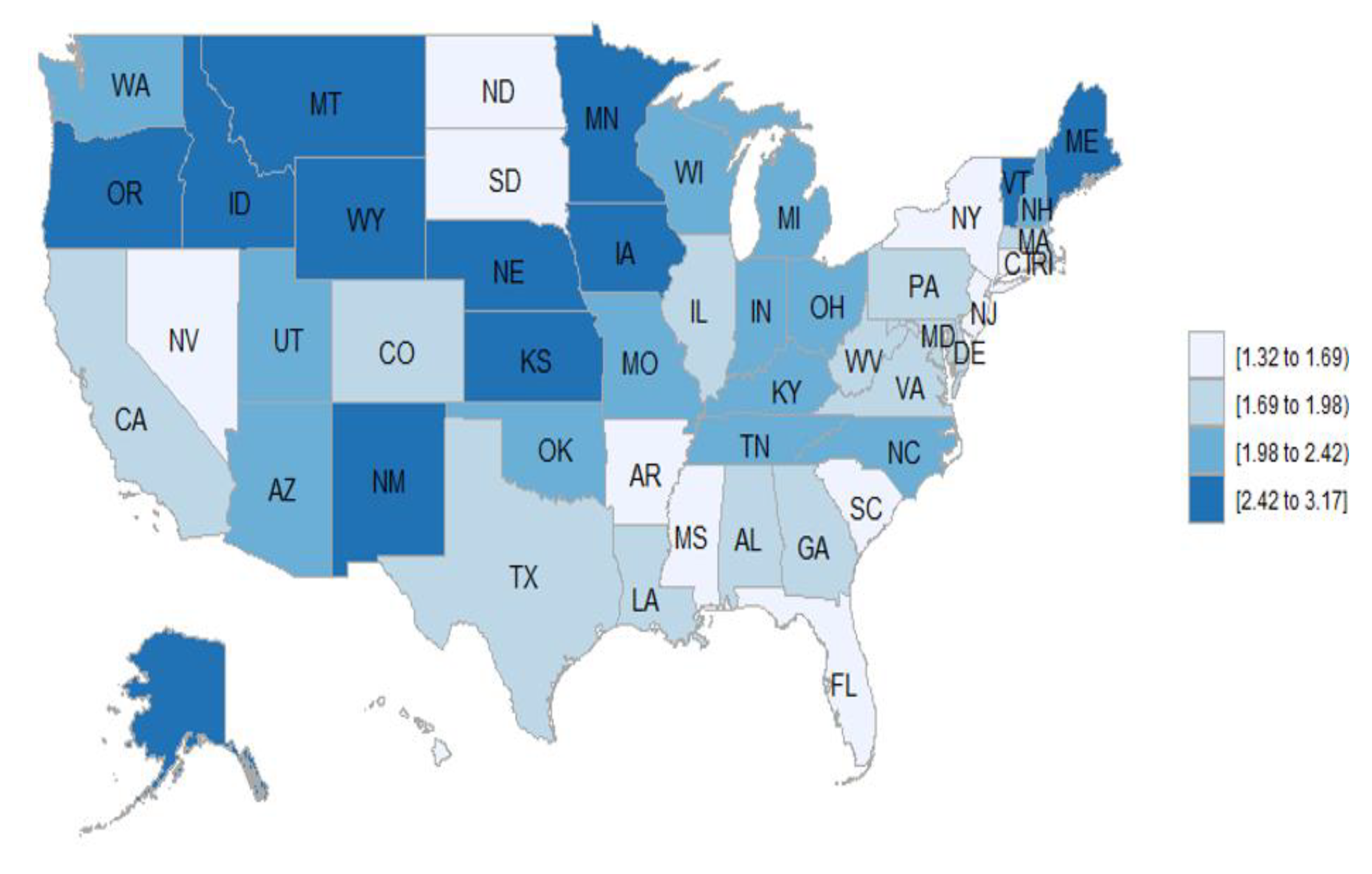