Background: The incidence of cholecystectomy is increasing as the result of the aging worldwide. Our aim was to determine the influence of heart failure on in-hospital outcomes in patients undergoing cholecystectomy in the Spanish National Health System (SNHS). Methods: We conducted a retrospective study using the Spanish National Hospital Discharge Database. Patients older than 17 years undergoing cholecystectomy in the period 2007–2015 were included. Demographic and administrative variables related to patients’ diseases as well as procedures were collected. Results: 478,111 episodes of cholecystectomy were identified according to the data from SNHS hospitals in the period evaluated. From all the episodes, 3357 (0.7%) were excluded, as the result the sample was represented by 474,754 episodes. Mean age was 58.3 (+16.5) years, and 287,734 (60.5%) were women (p < 0.001). A primary or secondary diagnosis of HF was identified in 4244 (0.89%) (p < 0.001) and mean age was 76.5 (+9.6) years. A higher incidence of all main complications studied was observed in the HF group (p < 0.001), except stroke (p = 0.753). Unadjusted in-hospital mortality was 1.1%, 12.9% in the group with HF versus 1% in the non HF group (p < 0.001). Average length of hospital stay was 5.4 (+8.9) days, and was higher in patients with HF (16.2 + 17.7 vs. 5.3 + 8.8; p < 0.001). Risk-adjusted in-hospital mortality models’ discrimination was high in both cases, with AUROC values = 0.963 (0.960–0.965) in the APRG-DRG model and AUROC = 0.965 (0.962–0.968) in the CMS adapted model. Median odds ratio (MOR) was high (1.538 and 1.533, respectively), stating an important variability of risk-adjusted outcomes among hospitals. Conclusions: The presence of HF during admission increases in hospital mortality and lengthens the hospital stay in patients undergoing cholecystectomy. However, mortality and hospital stay have significantly decreased during the study period in both groups (HF and non HF patients). View Full-Text
Keywords: heart failure; cholecystectomy surgery; in-hospital outcomes; length of stay heart failure; cholecystectomy surgery; in-hospital outcomes; length of stay
►▼ Show Figures 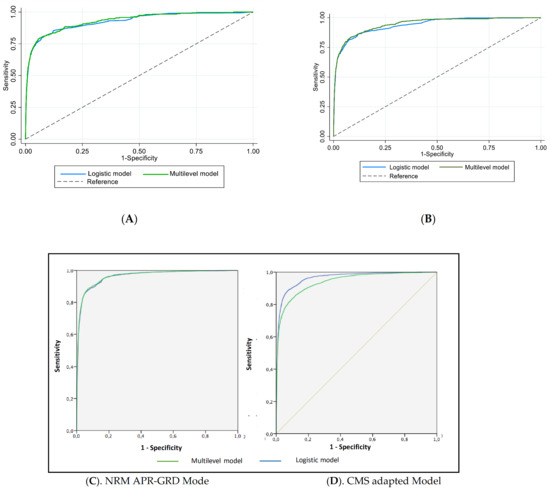