Cephalometric analysis based on lateral (and frontal) cephalograms is commonly used by orthodontists and maxillofacial surgeons to complete clinical diagnosis in patients with maxillomandibular deformities (MMDs) and to characterize upper airways in patients with obstructive sleep apnea syndrome (OSAS) before maxillo-mandibular advancement osteotomy or treatment with mandibular advancement splint. Numerous analyses have been described [1,2] to characterize the jaw’s deviation from its theoretical position. Lateral cephalograms are routinely used in the assessment of MMDs to establish a treatment plan and during follow-up. Traditional cephalometric analysis is based on landmarks and lines drawn on acetate overlays or on digitalized X-ray images, and on further calculations of specific linear and angular indices between these landmarks [3].
The biplanar 2D/3D X-ray technology (BPXR) (EOS imaging®, Paris, France) based on a low-dose X-ray system allows simultaneous stereo-corresponding posteroanterior (PA) and lateral 2D images of the whole body, including the head, to be taken in a calibrated environment [4,5,6]. BPXR uses an ultrasensitive multiwire proportional chamber detector to detect X-rays, thus limiting the dose of X-rays absorbed by the patient. The EOS 2D/3D imaging system allows the 3D reconstruction of the whole skeleton based on two-dimensional X-rays acquired in an upright position. This system provides reliable 2D images of the spine and is validated for clinical practice in orthopedics [7,8]. For example, BPXR is used to follow up patients with idiopathic scoliosis treated with the in-brace method [9]. In patients with scoliosis, numerous X-ray images are taken to follow the patient’s growth or the impact of the treatment on the spine alignment [10,11,12]. With low irradiation, BPRX provides a useful tool for the radiological follow-up of patients with spinal deformities, especially children.
Body posture and facial skeleton typology seem to be connected [13]. Scoliosis, for instance, is frequently associated with jaw asymmetry [14]. In this pathology, the body posture disorder most likely impacts the development of the facial skeleton through the muscular dysfunction of the trunk. Conversely, cervical spine hyperextension and subsequent postural disorder are observed in patients with MMDs causing mouth breathing, as in patients with OSAS, despite the absence of postural disorder history for most of these patients [15]. In both cases, the hyperextension of the neck results from an adaptation of the posture to fight increased upper away resistance and/or instability [16,17]. BPXR represents a promising tool to investigate the interaction between posture and facial typology. Berg et al. demonstrated that BPXR imaging of the facial skeleton was sufficient for landmark assessment [18]. However, the lateral view of BPXR has never been used for cephalometric assessment. If cephalometric analysis could be obtained using BPXR lateral skull view, the facial morphology of patients using BPXR for scoliosis or another spinal condition could be evaluated without additional X-ray exposure.
The aim of our study was to assess the feasibility of cephalometric analysis based on BPXR lateral skull X-ray images to accurately characterize facial morphology.

The imaging data of 22 patients who underwent both lateral cephalograms and BPXR as part of a clinical study investigating their posture were collected in the department of maxillofacial surgery of the Pitié-Salpêtrière Hospital. The study included 14 patients presenting with OSAS (ISRCTN70932171) and 8 patients with an MMD (NCT03532828). This study received approval from the relevant ethics committees (Comité de Protection des Personnes (CPP) Sud-Méditerranée 2018-A00362-53 and CPP Ile de France VI 2006-A00386-45). All patients provided written informed consent.
Eight patients were excluded because their lateral cephalograms were not digitalized and could not be imported in digital imaging and communication in medicine (DICOM) format. One patient was excluded because his head was incomplete on the EOS lateral view. We analyzed the data of the remaining 13 patients.

2.3. Comparison of BPXR and Lateral Cephalograms

To compare the two types of images, we used common cephalometric angles (see Table 1). DICOM images of the BPXR of the skull (Figure 1) and lateral cephalograms were imported in IdefX (v5.1.0, Paris, France). IdefX is a software developed to process BPXR images to generate 3D models from the two orthogonal biplanar X-rays. The landmarks used for the analysis are shown in Figure 2. The coordinates of the landmarks are obtained in two different geometrical frames. Indeed, the origin is different in the two radiographs. With BPXR, head-to-feet images were acquired while lateral cephalograms contained the skull and the cervical spine, each of them corresponding to a specific coordinate system. Therefore, we could not compare the coordinates of the landmarks obtained by the 2 methods. Angles obtained from landmark positioning were recorded. For BPXR, the angles were obtained in three different ways as follows: 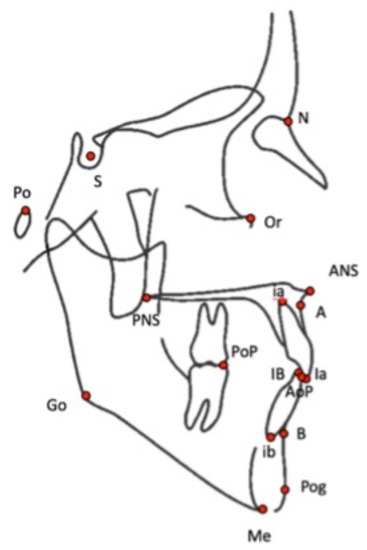 On lateral cephalograms, the cephalometric analysis and angle calculation were performed following two different methods: with the construction of straight lines (LC-A) and using landmarks (LC-L). The concordance of the three methods of BPXR with the reference method (LC-A) was then evaluated in order to determine the most reliable BPXR method.
To assess possible differences in the distortion, we also compared the two types of images based on the measurement of two horizontal and two vertical distances between pairs of landmarks, as listed in Table 1.
For each method, in order to estimate intra- and interoperator reliability, the angle measurement was performed by the three operators, repeated three times for operators 1 and 2, and two times for operator 3, with a minimum 2-week interval. A training session was organized 2 weeks before taking the measurements. All measurements were performed using IdefX.

For each of the three operators, the intraoperator (i.e., test–retest) reliability was investigated (1) for the landmarks (for the three methods using landmarks, i.e., LC-L, BPXR-L, and BPXR-LPA) and (2) for the angles (for the five methods). This reliability was evaluated using an intraclass correlation coefficient ICC(A,1) according to the notation used by McGraw and Wong [20]. ICC(A,1) is the variance ratio quantifying the absolute agreement between the two or three measurements of an operator for each of the 13 patients (two-way ANOVA model). According to Koo and Li, ICC values less than 0.5, between 0.5 and 0.75, between 0.75 and 0.9, and greater than 0.9 are indicative of poor, moderate, good, and excellent reliability, respectively [21]. Confidence intervals were estimated as in Mc Graw and Wong [20]. To summarize the results, mean ICCs over operators were taken over the Fisher transform (i.e., ln((1 + r)/(1 − r))) of the individual ICCs, and transformed back.

The interoperator reliability was investigated (1) for the landmarks (for the three methods using landmarks, i.e., LC-L, BPXR-L, and BPXR-LPA) and (2) for the angles (for the five methods). This reliability was also evaluated using ICC(A,1). Here, the variance ratio quantified the absolute agreement between a single measurement of the three operators for each of the 13 patients. For each patient, a single measurement of each operator was randomly chosen from among the two or three they made. The means of ICCs for the angles or methods were taken using the Fisher transform.

2.4.3. Concordance with the Reference Method

For each operator, the concordance with the reference method (LC-A) was investigated for each of the four other angle identification methods. This concordance was also evaluated using ICC(A,1); here, the variance ratio quantified the absolute agreement between an operator’s measurement using the method of interest and that obtained with the reference method, for each of the 13 patients. To synthesize the ICCs of the three operators, means were taken using the Fisher transform.

The mean, standard deviation (SD) of the difference between the repeated measurements for each method and between the two methods were calculated. The reproducibility was calculated by paired measurement comparisons with a t-test. The level of statistical significance was set at p < 0.05.
The statistical analysis was performed with MATLAB (version 9.10.0.1684407 (R2021a) update 3).

This study was funded by the Fédération Française d’Orthodontie.

All procedures performed in studies involving human participants were in accordance with the ethical standards of the institutional and/or national research committee and with the 1964 Helsinki declaration and its later amendments or comparable ethical standard. This study received approval from the relevant ethics committees (Comité de Protection des Personnes (CPP) Sud-Méditerranée 2018-A00362-53 and CPP Ile de France VI 2006-A00386-45).

The data underlying this article will be shared at reasonable request to the corresponding author. 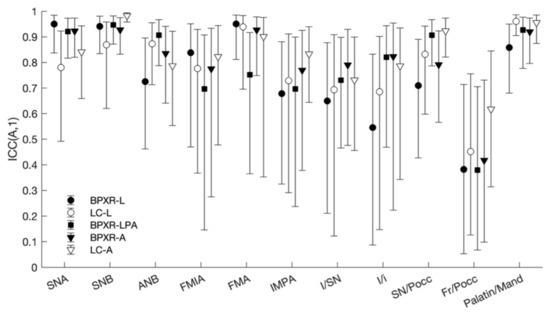 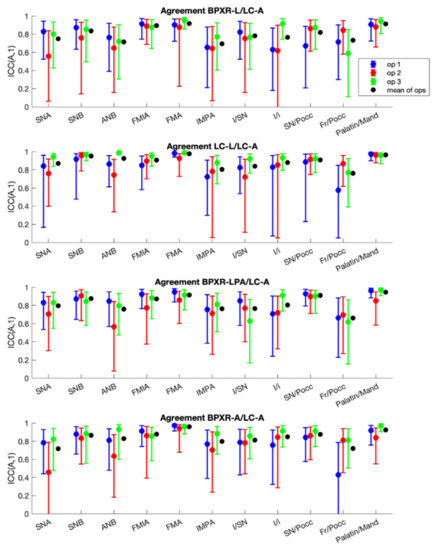 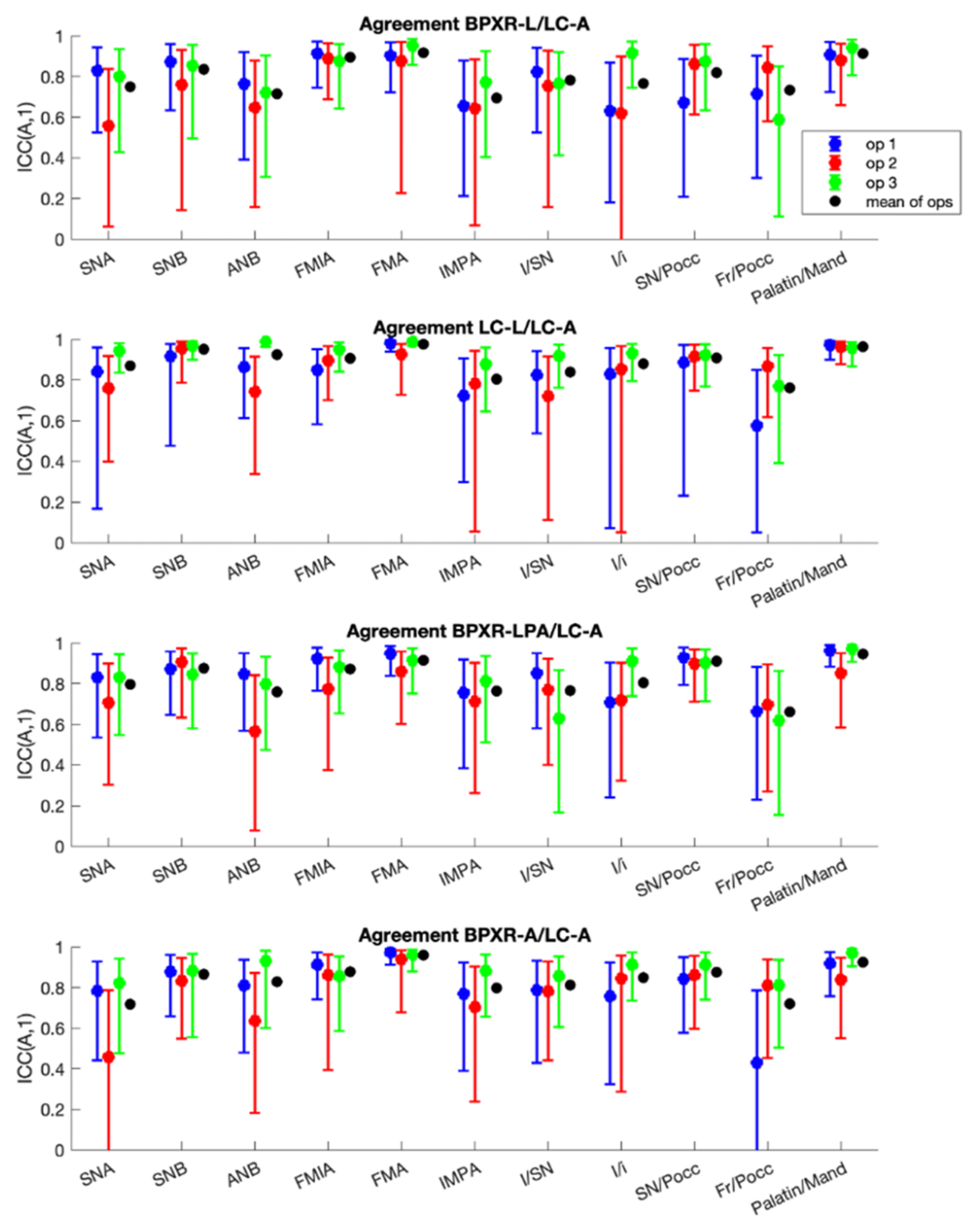