Elderly people need activities that will positively contribute to a satisfactory process of getting older. Vibration training uses mechanical stimulus of a vibrational character that, similarly to other forms of physical activity, affects metabolic processes and conditions of health. The aim of this work was to assess the influence of thirty vibration treatments on body fatness, hematologic and rheologic indexes of blood, and proteinogram and fibrinogen concentration in elderly men’s blood. The study included twenty-one males, aged 60–70 years (mean age 65.3 ± 2.7), who were randomly assigned into a vibrotherapy group (VG) and took part in interventions on mattresses generating oscillatory-cycloid vibrations, and a control group (CG), without interventions. In all patients the following assessments were performed twice: an assessment of body fatness using the bioimpedance method, a complete blood count with a hematology analyzer, and erythrocyte aggregation by a laser-optical rotational cell analyzer; whereas, total plasma protein and fibrinogen values were established, respectively, by biuret and spectrophotometric methods. In order to compare the impact of vibrotherapy on changes in the analyzed variables, analysis of variance (ANOVA) or the Wilcoxon test were used. After applying thirty vibration treatments in the VG, a significant decrease in body fatness parameters was confirmed: BM (∆BM: −2.7 ± 2.0; p = 0.002), BMI (∆BMI: −0.9 ± 0.7; p = 0.002), BF (∆BF: −2.5 ± 2.5; p = 0.013), and %BF (∆%BF: −2.0 ± 2.7; p = 0.041), as well as in RBC (∆RBC: −0.1 ± 0.1; p = 0.035). However, changes in erythrocyte aggregation and proteinogram were not confirmed. It was found that after thirty treatments with VG, a significant decrease of fibrinogen level took place (∆ = −0.3 ± 0.3, p = 0.005). Application of thirty vibrotherapy treatments positively affected body fatness parameters and fibrinogen concentrations in the examined. However, further research should include a greater number of participants. View Full-Text
Keywords: body mass index; body fat; blood parameters; fibrinogen; physiotherapy body mass index; body fat; blood parameters; fibrinogen; physiotherapy
►▼ Show Figures 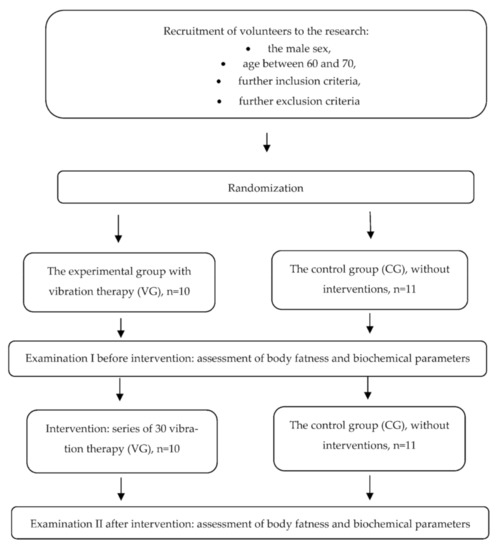