Adherence to Vaccination Policy among Public Health Professionals: Results of a National Survey in Italy

Increasing Measles Seroprevalence in a Sample of Pediatric and Adolescent Population of Tuscany (Italy): A Vaccination Campaign Success

Background: Despite the National Plan for the Elimination of Measles and congenital Rubella (NPEMcR), in 2017, a measles outbreak occurred in Italy, due to sub-optimal vaccination coverage (<95%) for many years. Since that year, the anti-measles vaccination became compulsory in minors (0–16 years) for school attendance. The aim of our study was to assess the immunity/susceptibility against measles in a representative sample of pediatric and adolescent (1–18 years) residents of the province of Florence (Tuscany, Italy), and to compare these results with two previous surveys (2003 and 2005–2006). Methods: The enzyme-linked immunosorbent assay (ELISA) was applied for a qualitative measurement of anti-measles antibodies on 165 sera. The anamnestic and vaccination status was also collected. Results: No measles notification was reported. The overall seropositivity was 88.5%; mostly in the 5–9 years old subjects (97.9%). Among the 152 vaccinated, 92.1% were positive. The seropositivity persisted after many years since the last dose of vaccine and tended to be more long-lasting in those who had received two or three doses. The susceptibility towards measles decreased over time, reaching a lower value in the current survey (8.5%) than in 2003 (30.8%) and in 2005–2006 (25.5%). Conclusions: This study confirmed the anti-measles vaccination campaign success, which allowed for the increase in vaccination coverage and immunity levels against measles in the Florentine pediatric and adolescent population following the NPEMcR implementation. View Full-Text
Keywords: measles; elimination; vaccination; pediatric; adolescence; seroprevalence; Italy; vaccination coverage; vaccination effectiveness; MMRV vaccination measles; elimination; vaccination; pediatric; adolescence; seroprevalence; Italy; vaccination coverage; vaccination effectiveness; MMRV vaccination
►▼ Show Figures 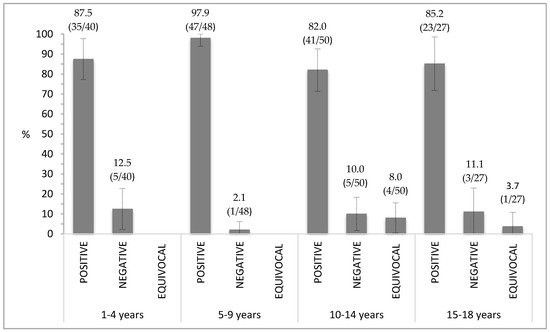